Thank you to everyone that helped with the ant problem. I used the Terro drops and haven't seen one ant this week. I hope it's finally over.

It was cooler for two days so I decided to tackle the golfcart. It had spider webs all over it and when I dropped the sides,  there were mud daubers and wasp nest and lots of spiders in it. It took two hours to get it cleaned up. I need to use it more, or at least spray it down and wash it once in awhile. I don't use it much, no place to go and too hot to just ride around. We have a few more weeks to get out of the high 80's or 90's.

Tuesday was Jim's birthday, the big 70. He says he feels it and was bumming. I know it's just a number, but it means you're older and starting another decade. He wanted a steak so we went to Longhorn Steakhouse in Lakeland. 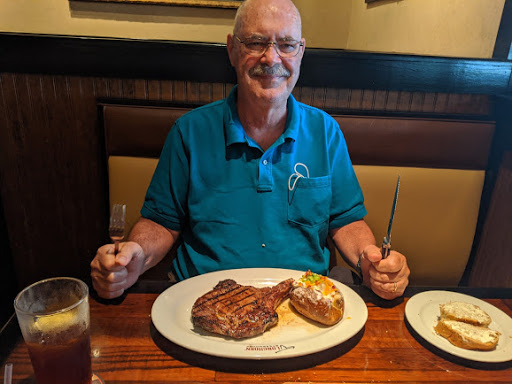 He ate the WHOLE thing. 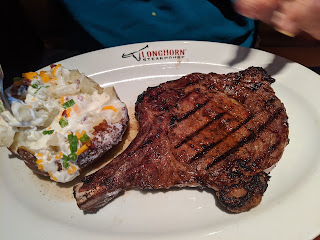 With Ice cream and whip cream for dessert 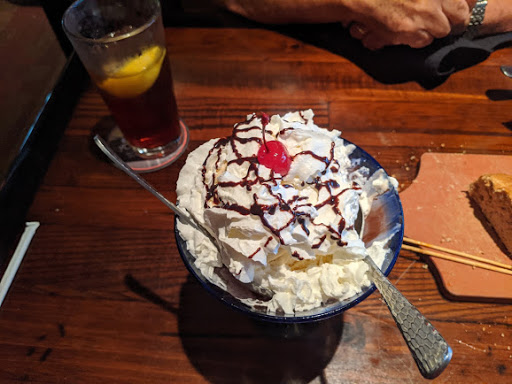 And carrot cake later in the evening. 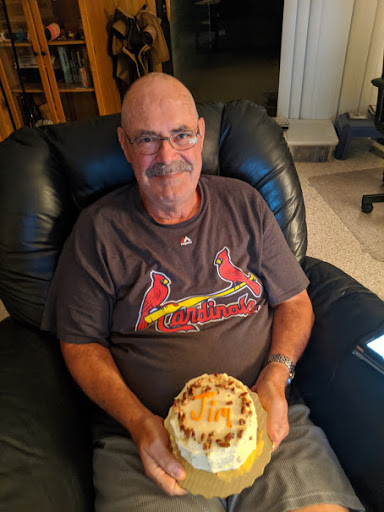 He thanks everyone for the birthday wishes on Facebook. He gets steak on his birthday and I get lobster on mine.  I love the Longhorn because I get appetizers with HOT soup which is so abnormal at restaurants. It was excellent lobster/shrimp soup. I also added two shrimp skewers, and a sweet potato. Perfect. I forgot to take a picture.

Wednesday I had my eye appointment. It was very safe because of Covid. They checked temperature and signed papers outside to be sure your ok before going in the facility. I didn't wait long and had the first part with questions with an assistant then the doctor came in once my eyes were dilated. Jim waited in the car because I can't drive. Every doctor I've seen say with blue eyes the dilation won't let you see as well as other color eyes. I passed, only a very small change in lenses for reading.

The rest of the week was volunteering at hospice and crocheting. I'm also making a new website for all my "critters".  The weeks are flying for the first time. I guess I'm not bored like normal.

I decided to take Saturday to clean out our junk drawers. It's amazing how much I threw away. We now have nice organized drawers.

Thank you to all the readers, it's good to know someone is out there. I sure don't see many people. We do have a chatroom if anyone would like to come in for just a quick chat. We talk about anything and usually only 4 of us. Just click on guest or facebook and we'll see you. We're there every day about 8:30 eastern time.  Chat Room

Happy Birthday, Jim! You made it to 70! And you look great, too! Wishing you a few more decades to enjoy those great birthday dinners.

Hi Dee! Checked out all your critters last week. WOW! The page just goes and goes. Never did get to the end. You sure are talented. Have a great week you guys!

Happy birthday! Now that a steak. Also thanks for the tip on the ant killer. I've been using on-contact killer spray on the mounds outside which does the trick. So far, none have infested the camper. Knock on wood.

I'm with Jim on the preference for steak. Not a fan of Lobster. I think I might have told you that when in Maine I thought it was mandatory to order lobster. So I did. And I sat there in envy watching Leonard eat his Prime Rib.