Hard to Say "NO" - Special Launch

I'm starting out with something going on during the Covid 19 about getting groups together. At the moment we can't meet in groups and you have to stay six feet away from each other. It's something that you have to think about having groups meeting for cards, or any sports activities. I'm thinking on a smaller scale, the yearly craft fair. The past four years I've had a craft fair in the community. It's a lot of time and at times headaches, but it's my love and I was so excited to do it.  In the past couple months I've been getting calls from vendors wondering if I'm still having it this year. It's so hard to say no.  There's several things in life you just can't say no, helping others for one thing, I'm not a no person even though I want to at times. I'm sure there's others that think the same thing, but it's even harder now being under quarantine. I haven't seen anyone in the community except on a golfcart in passing.

I'm still working at hospice and I'm learning a new way of scanning files into the computer. It's great to get it done faster and it's quite challenging. I worked Tuesday, Thursday and Friday. I'll go back on Monday now that I've learned how to do it a different way and get caught up.

The highlight of the week was going to Cape Canaveral for the Spacex launch. We took Lessie and Ed with us.  This was a planned two man launch to the space station.
Dee, Jim, Lessie, Ed 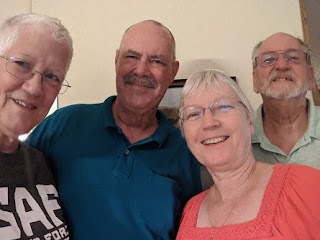 They met us here then we went on over to the Cape about 11:30. It's only a couple hours there but we hit traffic 18 miles out and it was stop and go all the way to US 1. The traffic was so bad we decided to stay on US 1 and not go over the bridge to A1A.  (Click on photos to enlarge). 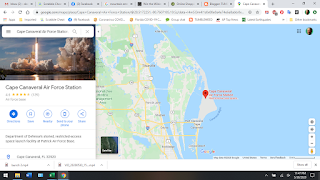 We drove till we found a nice spot across from the VAB building in the distance. The 39A pad was just to the right. We ended up in Sharpes, right on the river side in a parking lot. It wasn't long before people were all around us and cars were parking on both sides of the road. 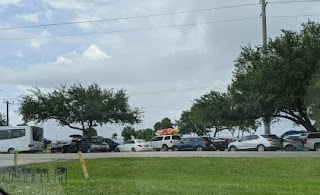 The tree to the left and looking left is the VAB (Vehicle Assembly building).

It rained a couple times while sitting waiting for the countdown. We took chairs and went on the other side of the road past the tree and waited for the launch at the 10 minute countdown. There were a LOT of people. 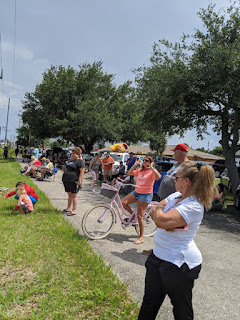 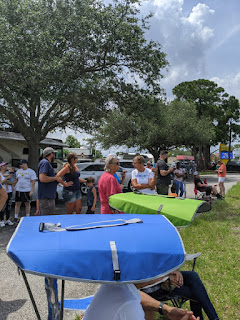 and there it was!  (See the light above the women in pink. 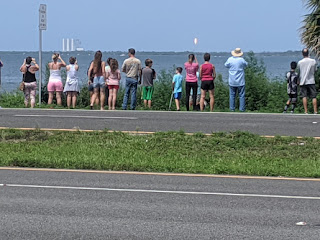 Watch the launch. I didn't let it run the whole time.

Then out of sight. 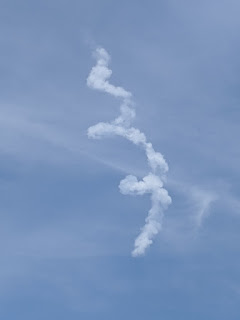 The roar was a minute later and it was loud. It was amazing. We're back into the space program. They're going to connect to the space station at 10:30 on Sunday morning. It's all on youtube.com if you're interested to seeing the whole thing. We're so glad we went over. The trip home was stop and go traffic. We stopped to eat at Miller's Ale restaurant.
When we got home we had a downpour like a hurricane without wind. We found a bad leak in the bedroom window putting water all over the floor, so we'll be getting our maintenance guy out to put more caulking on the top. In the meantime when it rains, we have towels catching the water. 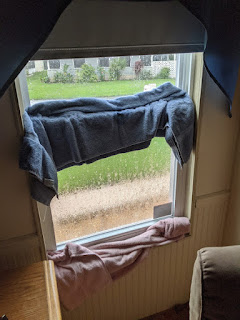 We're so glad we decided to go to the Cape. We knew since the first launch was scrubbed because of weather it was a chance it wouldn't go up again, but it did. It's quite a sight (and feeling) to watch a launch.

Everyone will be so glad to be done with this virus but the experts are saying there could be a second and third wave to it.
Glad you had the chance to experience the launch first hand. We were at the center with our grandsons when the Juno Satellite was launched in 2011.
Hoping you get that leak fixed without damage to your home.
Be Safe and Enjoy!

You're lucky to get a restaurant that's open for dining. Ours are opening this week, as well as Great Clips (haircut, yay!). Still wearing our masks in stores, and no church yet :(