This week it's all about the Lake Juliana Landings Directory. I had everyone scheduled for the week on a list that the LifeTouch provided for people to come in every ten minutes for photos. The company called each person for a reminder. I had a hostess setup to sign in the people and ready for the photographer. This is Amanda with the setup for photographs.     Everyone was on time and only a few cancellations the whole week (Click on the photos to enlarge).

Amanda and Rick our photographers. 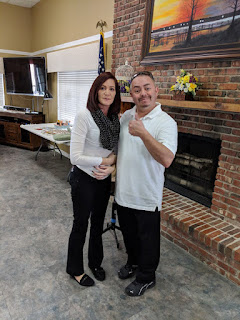 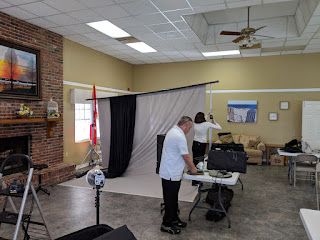 The events of the week continued. Bunko was Monday night. 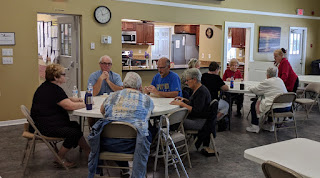 We were usually done by 5:00 from Tuesday to Friday night. On Tuesday it was Peggy's birthday so we had a birthday party for her. 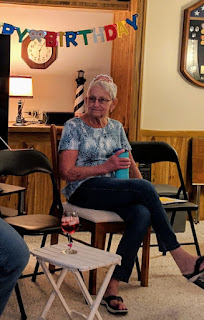 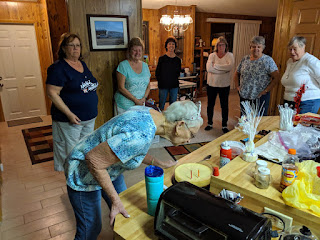 I had to include Peggy and her husband George from the photo shoot with their dog Cody. 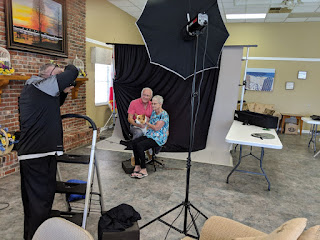 We had several people with their dogs and all of them were so good. It was fun listening to the photographer try to get the dogs attention.

Friday night was the end of the photography sessions. It's now my turn to get all the names to LifeTouch. I'm so glad I know computers it's all digitally done. The process is fairly simple, the time can be consuming. I have to have the phone with me at all times to take calls for those that want to be in the directory with pictures. I have a different area code and no one answers. A lot of them don't empty their voice mails or don't listen to them. If they call no matter what you're doing you need to answer the phone. You'll never hear from them again. I had a couple people help with calls that are in the area code which helped. I also had people help pass out flyers to each household to tell everyone in the community about the directory.  No excuse for not knowing.

We ended the week to a Lakeland Magic basketball game. (The G league to the pro basketball the Orlando Magic).  We lost, but we've noticed there's been a few women referees. This is the second time we've seen this lady. More and more women are getting into the sports world. 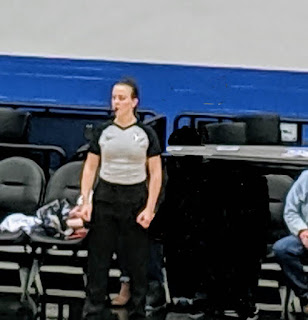 It's been a fun week.