The next week will be picture intensive. Please click on picture to enlarge.

The day finally came to go on our cruise to the Eastern Caribbean and it started early at 5:30am. We had to be at the clubhouse to get on the bus at 7.30. We stopped at another community north of us to pick up a few people then on our way south to Ft. Lauderdale which we left at 8.30. We arrived at the Ft. Lauderdale Port at 1.30 after a stop at a rest stop on the Florida turnpike.

The lines were long but went fast to go through customs. We were in a special line because of perks for loyal Royal Caribbean customers, we're in the gold club. The ship is huge, there's only one other ship bigger. This one has 6,500 travelers and 22,000 employees. This one has the latest and greatest technology. It's  well organized for this many people.
Waiting in line in the port. 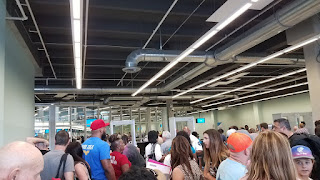 We had our luggage within a couple of hours beside our door. We sat on the balcony to watch leaving port after the mandatory emergency briefing. This was done a lot differently then we've ever done. We sat in the area specified and they did a life jacket demonstration then watched a movie for some details on safety.  We made it to dinner at 5.30 which is our scheduled time in the main dining room with three decks of tables. We're sitting with part of the LJL  (Lake Juliana Landings) group that was on our bus.
Looking around Port Lauderdale before the safety drill. 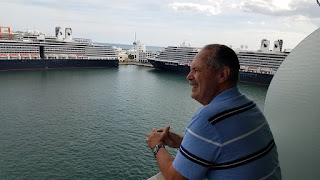 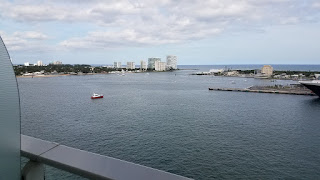 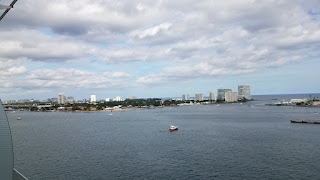 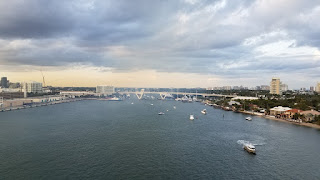 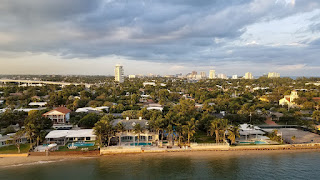 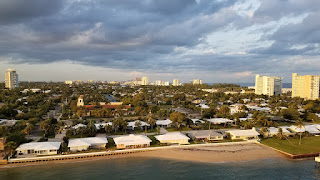 People were along the coastline waving bye to us. 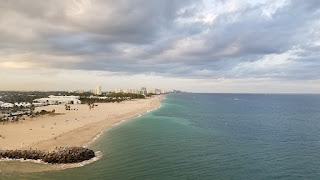 Our room view from the balcony. It's really nice with couch that pulls out to an extra bed. There's lots of storage. The shower and bathroom are bigger then the other ships we've been on. 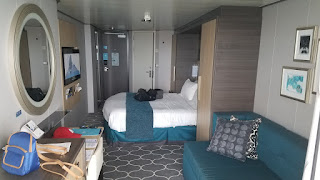 Looking from the door to the balcony. 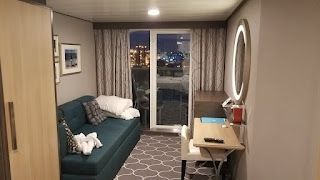 We had to check out some of the areas on the ship, here's a few of the views. I took more of each deck through out the week.
Deck 15 is all sports and pools. 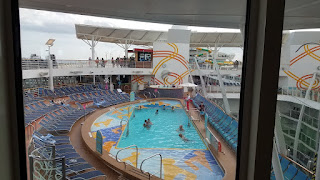 This is the nighttime view from different decks. It's gorgeous. 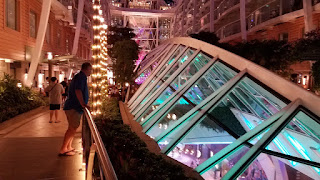 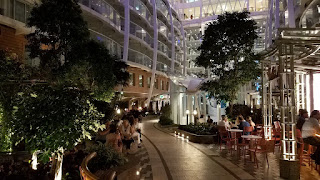 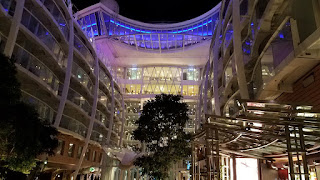 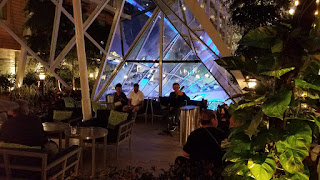 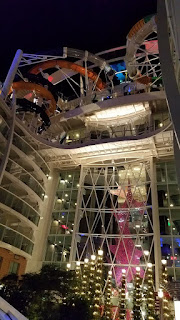 We were checking out the ship when we came across Fine Line Aqua dancing. It was a great show and the main entertainment of the night. They do dancing in and out of water, plus high line acrobatics from wires. We saw it twice. 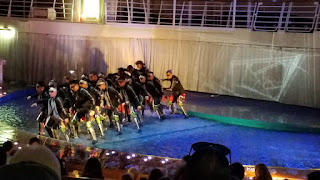 This guy twirled for 10 minutes without stopping, flinging and doing a fancy dance with that big skirt. 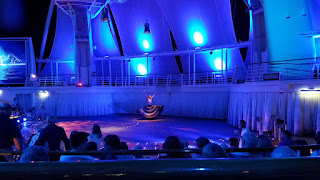 There's a hard floor that drops and then water appears. 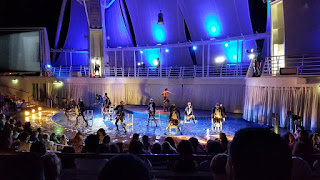 A girl and guy did aerial acrobats. 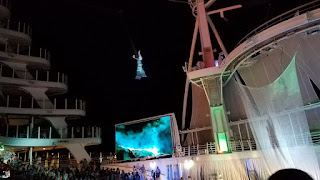 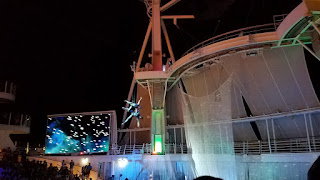 This tight rope walker is amazing. He didn't fall the first night but did the second time. Now remember this is a moving ship. 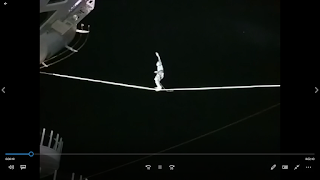 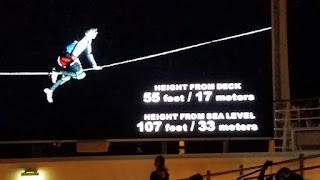 There's also divers that jump from the tall tower in the little 17 foot space below. Are they nuts?! 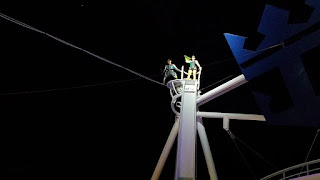 The first view of the moon from our balcony on the first night. It was the best all week. Two other ships in the background and notice the smooth ocean. It was that way till the last night. 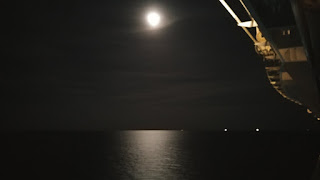 The down side of this ship is waiting in line and finding a place to sit down and eat and the Windjammer which is the go to place for lots of variety of food. The elevator also is a pain to get in with so many people. That should calm down a bit after today.