Have you ever gone to a show or concert that was really good and fun?  That's what we did on Saturday night. Darci Lynn is the ventriloquist that won America's Got Talent last year. She was also on Little Big Shots. She's 13 and learned to work with puppets in ONE month. She's outstanding and can work the audience very well. If you get a chance to see her think about going, it's well worth it.
Dr. Phillips Center, Orlando (Click on the pictures to enlarge). 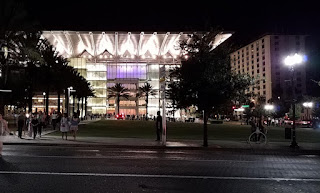 Our seats from the balcony. 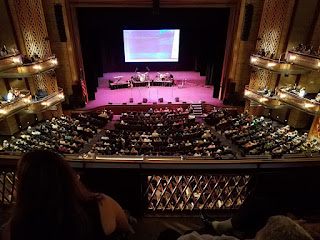 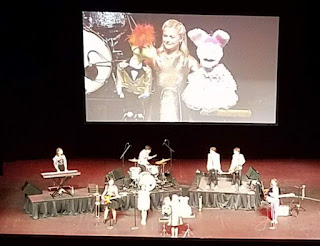 The band that was with Darci was also on the America's Got Talent named Pelican212. They're a family of 10 kids and seven of them are playing together. They're very talented and can play and sing quite well. They opened for Darci then did a couple songs with Darci and the puppets. 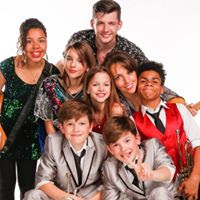 We had dinner at Millers Ale House before the show and I had planned on Fish tacos, but the special was a whole lobster. What a surprise!  We were almost to the Dr. Phillips Center in Orlando when we had a downpour of rain and lightning. The roads were flooding but we took it slow and easy and made it there ok  just before the show started. It's always good to leave early when traveling on I 4 toward Orlando or Tampa. 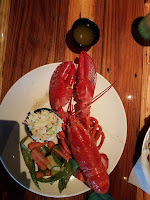 There's a few movies that are out that we wanted to see. The first movie we saw was Equalizer 2. We loved the first one and  I liked the first one better and Jim likes the second one better. This time there were several people in the theater which the first in a long time, we're usually alone.

The second movie we wanted to see, Mission Impossible Fallout so we headed to the theater on Monday. That's an excellent action movie with Tom Cruise. We both loved it and it's got twists and turns not expected. It's definitely a two thumbs up. 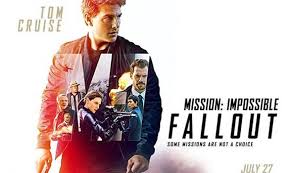 Jim went to the Rays game the same day Trump came to Tampa on Tuesday. He didn't have a real bad time going to St. Petersburg, but roads were closed in several locations which made traffic stopped in the area. That's always a bad time when you're trying to get somewhere.

He had great seats, but one thing that's neat about the games is they have a big water tank that has sting rays in it. Here's a few pictures.
From his seat 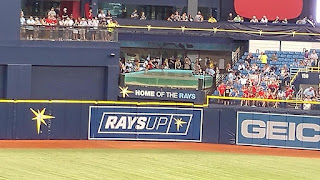 Looking toward his seat. 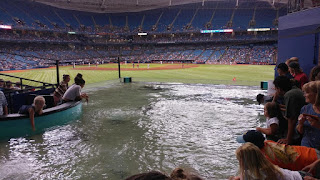 One of several stingrays. 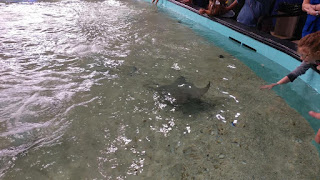 Wednesday was really busy. We have weekly meetings in the morning for coffee and donuts. This week we took a CPR class updating what we did years ago. We also learned about the new AED's, (automatic electronic defibrillator) that we knew nothing about. The class was an hour long and we learned a lot. Now we have CPR cards just in case we'd ever need them. After that was over the management brought us lunch. BBQ sandwiches, baked beans, potato chips, and blueberry cobbler.  The gals hand and foot card game was right after I was done eating. That lasted till 3:30.  I then went to a friends house for an hour, home ate dinner and collapsed in a chair. Wednesday's are always busy but I usually have a couple hours between activities. Is it age? That made me tired!

It's been a great week and the lake activities have been about the same. I haven't seen the Sandhill cranes but the family of turtles have been out sunning themselves. We're still having rain and storms everyday. 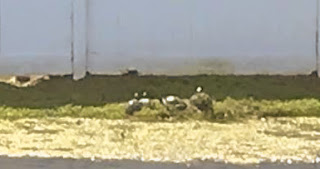 This weeks crocheting projects. Hippo, two types of fish in bowls and seahorse. 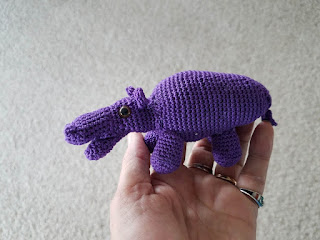 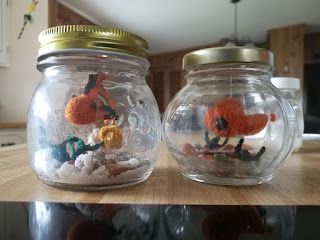 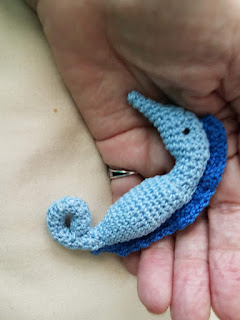