We're getting a cold front this week, but it's been in the 80's all of February so it's time to cool down before the hot season starts.

Darlene and Jim were in Lazy Days to get their RV repairs done so we met up with them at Parksdale Farms Market in Plant City for strawberry shortcake. (Click pictures to enlarge). 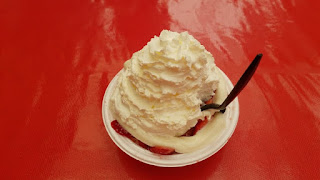 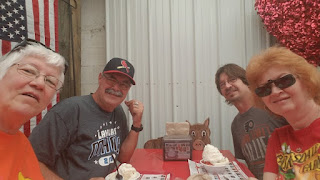 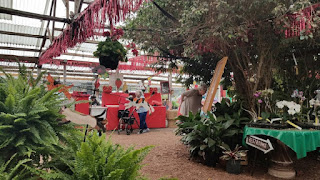 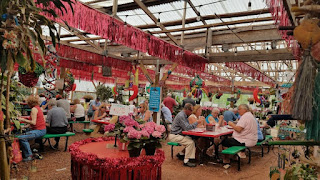 We visited awhile then we went out separate way. They wanted to check on the RV.  We'll see them the next time they're in Florida.

Tuesday we went to Okeechobee to go fishing for my brother in law, Herm, for his birthday out on the pontoon boat. It's always interesting when we go out. We had planned a trip down the Kissimmee river then stop for grilled lunch on the boat in a cove. The grill wouldn't light. We came back to the starting point and did an hour fishing. There's still remnants of hurricane Irma along the river.
This was a houseboat. 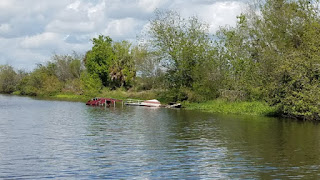 Further up the river more of the boathouse. There's bits and pieces along the river bank. 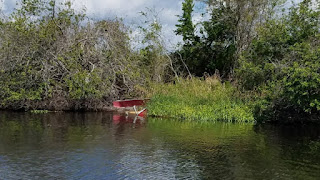 It's a wide river. There's not as many boats as the last time. 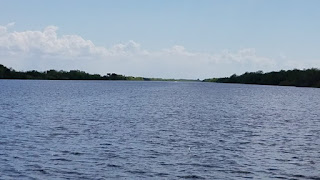 The cove we were hoping to make lunch. 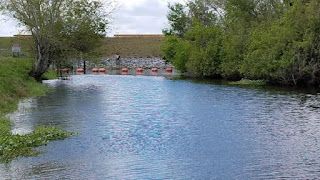 We saw several alligators but this one kept checking us out while we were fishing. It felt like he was waiting for us to catch a fish and he'd grab it. He swam around awhile then went further up the river. What a great site to watch him. 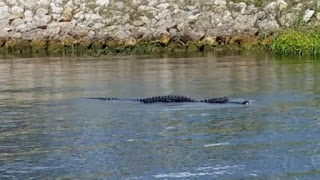 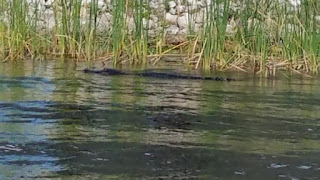 He was watching the other boat beside us. 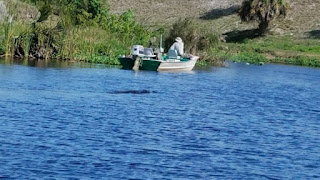 This bird was waiting for us to catch a fish too, he never moved, except swaying back and forth in the wind. 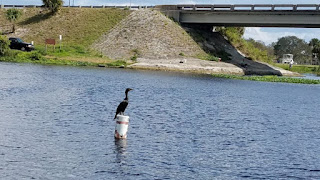 Back into the little canal where we began. No fish caught this time. Too late in the day. 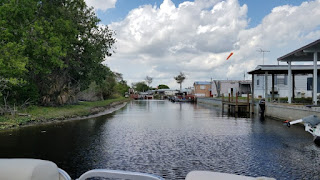 We had lunch/dinner at the house. We visited a couple more hours and went home. Great day on the river it will be the last for this year. They leave for the north in April. Jim is working the Detroit Tigers training camp and directs traffic so the rest of March is very busy. Sis is going to the Cardinals training camp in Jupiter.

I have one of the paper necklaces and earrings done. The whole thing is pictures of eyes. I'll be doing a few more paper bead necklaces for the craft fair in November. 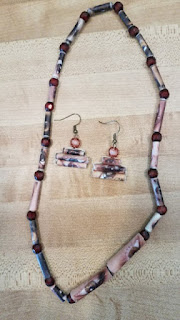 I haven't posted much on the clubhouse activities. I thought I'd just put in a picture of the calendar we have. I do MOST of the stuff, not all of it. (Click on it to enlarge). 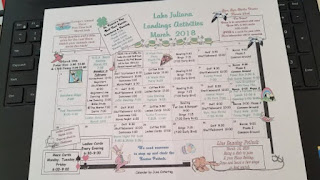 Sunset with lots of smoke from the fires in the fields. A yearly burning around Florida.