(Schenectady, NY) Hi 79 Lo 62 – We had some heavy thunderstorms roll through this morning, which totally surprised us. It was supposed to be only 30% chance of rain. The radar showed a huge area of rain over almost the whole state of New York. I was excited about driving to Cooperstown to see the National Baseball Hall of Fame and Museum today, but the rain had me thinking about postponing it until tomorrow. But the rain slacked off some by 10am, so I headed out. Dee stayed home. She encouraged me to have a great time. I can’t imagine anything she would enjoy less than being dragged through a baseball museum. And by going by myself I can spend as much time as I want, without worrying about her being bored.

It was a 50-mile drive through the beautiful rolling hills of eastern New York. I got to Cooperstown about 11:15 and found a parking space in a town lot. It costs $10 to park in the lot on weekends, but it’s free during the week. Cool! The HOF building is pretty impressive, and dominates the downtown area of the little village. 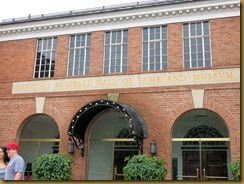 The admission price to the museum is $19.50, but I found out that active and retired military get in for free. Really cool!

The National Baseball Hall of Fame and Museum takes up three floors, with the HOF Gallery on the 1st floor, and museum exhibits on the 2nd and 3rd floors. There’s also a theater on the 2nd floor that has a multi-media show every hour. As was recommended to me by the nice lady at the admissions desk, I started on the 2nd floor. There the main exhibit was a comprehensive timeline of the history of baseball, taking you through the years from the mid-1800’s all the way up to present day. 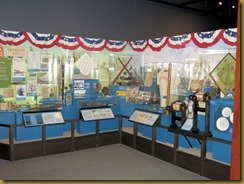 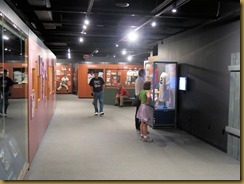 Seeing original uniforms, caps, bats, and gloves of all of the greats of the game was almost overwhelming. Here’s a few photos of items that especially thrilled me. If you click on the photos you can enlarge them for a better view.

Babe Ruth’s jersey from his first year as a NY Yankee. 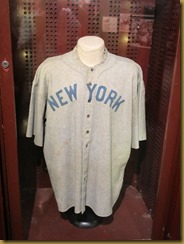 This is the bat Babe Ruth used to hit his famous “called shot” home run during the 1932 World Series.

Back in the 1800’s they actually published want ads for players. This one is amusing in a way, but shows the blatant racism of the day. I can’t imagine why they wouldn’t want any Irish baseball players. A cap worn by the great Joe Dimaggio. 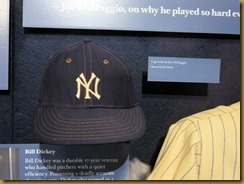 One of my boyhood sports heroes was Mickey Mantle. It was very cool to see Mick’s Jersey and bat, on display in his original locker from the original Yankee Stadium.

Of course, being a St. Louis Cardinals fan, I made sure I saw as much as I could that had anything to do with the Cards. Like this original locker that belonged to Stan “The Man” Musial, the greatest Redbird of them all. That’s his original uniform and the scorecard and ticket stub from his last game.

One area had a display for each of the modern day teams, which contained historical items and historical information. The only other team besides the Cardinals that I follow closely is the Tampa Bay Rays (I am a Floridian), and since the Cardinals and Rays exhibits were next to each other I couldn’t resist having someone take my picture in front of them.

On the third floor was an exhibit with every World Series ring and pin in one display case. It made for a very impressive (and valuable) display.

Which one shall I show for a close up? Umm, how about the Cardinals.

A room devoted to “The Art of Baseball” had many baseball-themed paintings. But the object that caught my eye was this one.

This is Phil Niekro’s jersey, but what’s unusual about it is, it’s made entirely of baseball cards. The artist amasssed hundreds of Atlanta Braves (Niekro was a Brave) cards and carefully cut them up and pasted them on the poster. Here’s a close up of his work. (You can really see the detail on this if you click on it and then zoom in on it.)

That’s pretty amazing. And speaking of baseball cards, there was a nice display of cards through the years.

Seeing some of the cards from the 1960’s almost brought tears to my eyes. I thought about all the cards I had back then when I was a young teen, and wishing I still had them. (And I also thought about how many cards I destroyed by clothes pinning them to the spokes on my bicycle to make it sound cool. Remember doing that, guys? Come on, who’s with me on this?)

After spending almost four ours in the museum I went down to the first floor to see the main attraction, the Hall of Fame Gallery.

Every Hall of Fame member has a plaque on the wall.

A lifelike statue of Babe Ruth stands in the gallery.

Here’s a close up of the plaque of one of my favorite Cardinals, Ozzie Smith.

Seeing the National Baseball Hall of Fame and Museum was an amazing experience. Every baseball fan should really try to see it some time in their life. I was particularly amazed at how reverential everyone seemed as they wandered through the galleries. Like it was almost a religious experience. Especially the older folks (like me). The museum really stresses the “romance” of the sport, and the positive effect it’s had in our country’s history. Being a baseball fan in this modern era can be difficult at times, what with the inflated egos of the players, the exorbitant amounts of money involved, and the steroids. But once the game starts I don’t think about any of that. Go Cards!

We've been there and it is amazing. Nice tour...Thanks!!

We've been there, spent one day just watching the kids play. Really great fun to watch them have the time of their lives playing in Coopertown.

Hubs wanted to go so bad. . .just couldn't work it into the schedule. . .boo hoo. . .maybe next trip this direction!