(Joint Base Cape Cod, MA) Hi 75 Lo 50 – Since we’ve been here we’ve been a little unsure of what to call this base. We’ve seen it listed as Massachusetts Military Reservation and Coast Guard Base Cape Cod. I happened to be reading a base newspaper today and saw an article about the Mass. governor recently renaming the base Joint Base Cape Cod. So that’s what we’ll call it from now on.

Today we went back to Plymouth to visit the Plimoth Plantation. (They spelled it phonetically as Plimoth back in the day.) We didn’t have enough time left in the day to do it justice when we visited downtown Plymouth the other day. Plimoth Plantation is a living museum that recreates the original Plymouth colony established in the 17th century by English colonists that initially came over on the Mayflower. It has three major sections, a homesite of the Wampanoag Indians who inhabited this area at the time, a 17th century English village, and a Craft Center with modern craftsmen demonstrating techniques of the 17th century.

Our first stop was the Wampanoag Homesite. The small village is populated by actual Wampanoag indians who interact with the guests in modern language, explaining their culture and how they lived back then. There were several huts that you could go inside to look at 17th century Native American living conditions. 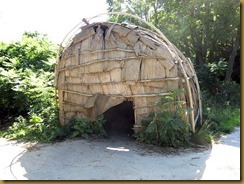 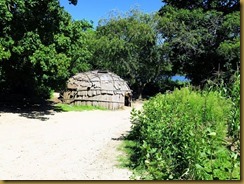 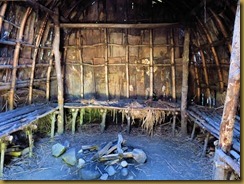 This gentleman demonstrated and explained how the interior furnishings of the huts were constructed by braiding the branches together. 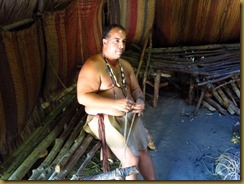 This guy seemed like the main spokesman for the village. It was interesting listening to him talk about life in a village like this 400 years ago. 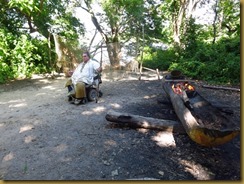 These two ladies were explaining their crafting techniques. They were braiding a small blanket. 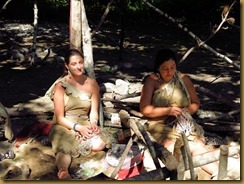 In one area they were making a mishoon, a canoe-like watercraft. They first hollowed out a log using tools, then burned the inside until the shell was the right thickness. 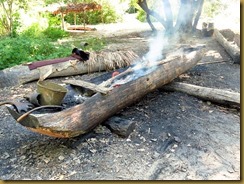 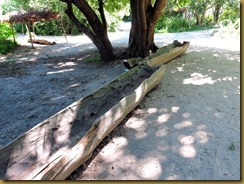 The trail from the Wampanoag village to the English settlement offered some nice views of the Eeel River. 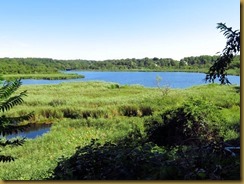 The English settlement had many role players, who dressed and spoke as 17th century English settlers. The village looked remarkably real. 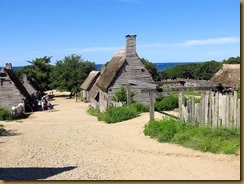 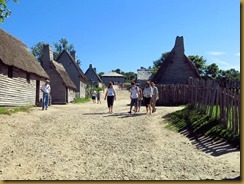 Most of the houses had one room, with the barest of furniture. 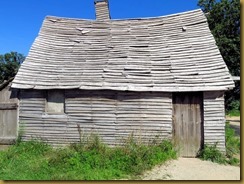 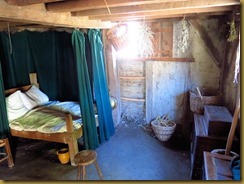 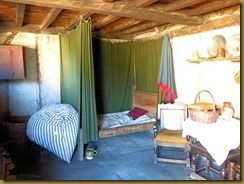 This gentleman was a Bible-loving Pilgrim who explained how none of the villagers actually owned their houses. 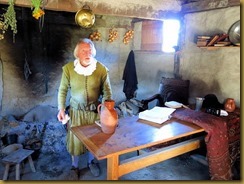 They all invested in stock in England and the proceeds were used to build the village, with equal ownership among all of them. Sort of like a modern co-op. They hope to eventually petition the (English) King to allow individual ownership. (This was over a hundred years before the United States was established, so they were still under British rule.) 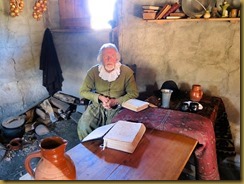 It’s amazing how the village “residents” stay in character. As I approached these two ladies taking a break, they were talking back and forth in the old English dialect. 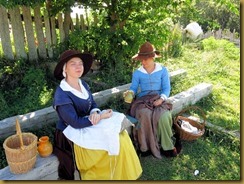 At the end of a street and up on a hill was the two-story fort, which had a meeting house on the first floor. 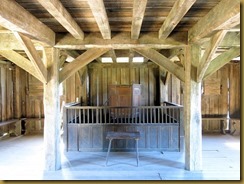 On the second floor of the fort was a small group of cannons, used to defend the village. 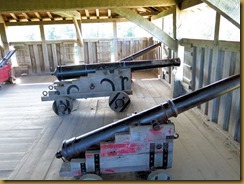 The second story of the building provided a nice view of part of the village with Cape Cod Bay in the background. 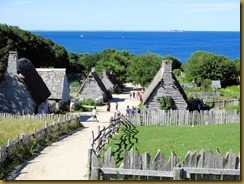 From there we walked the trail to the Craft Center. All of the items made by the craftsmen are used in the English village as part of the recreation. 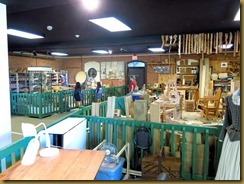 There were three craftsmen working when we got there. One was a woodworker, who did amazing work using only 17th century tools. 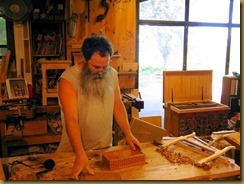 These King and Queen chairs had incredibly beautiful engraving done by hand by the gentleman in the photo above. 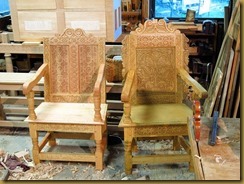 Here’s a closer look. (Click on the photo to enlarge it.) 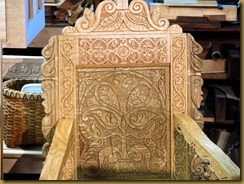 This potter was fun to watch as he made several drinking cups. 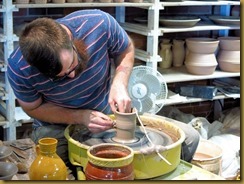 This guy was making arrows. They were hand carved from raw wood. 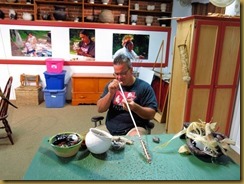 It was an amazing experience seeing Plimoth Plantation. We did have one disappointment. Part of the Plimoth Plantation experience is seeing the Mayflower II, a recreation of the original Mayflower which is docked on the Plymouth waterfront. Their website said the ship is in dry dock for the summer for repairs. We found out today that it was returned to the waterfront today and is open for visitors. However, we didn’t allow enough time to see it today. So we may have to make a return trip to see it before we leave. They have period guides aboard to explain how 102 passengers plus crew survived a 7-month crossing of the Atlantic in such a small ship. We just have to see that!

It was a great day. Dee mentioned that so far this summer we learned about the 1800’s (Civil War) in Gettysburg, the 1700’s (American Revolution) in Philadelphia, and now the 1600’s here in Plymouth. That’s quite a summer so far, and we’ve got a lot of summer to go!

We've been there also, and were impressed like you were with the way the actors stay in character and dialect. I think I actually enjoyed Plimoth Plantation as much or more than Williamsburg, Virginia.

Thanks for the tour. We'll have to add this area to our list. It looks wonderful!

That's great! It is such a great place. They do a great job of recreating that time period.

Now you need to go to Roenoke Island and see the Lost Colony.

Don't believe I could have lived back in those days. Those were some strong willed , crafty folks.