(Massachusetts Military Reservation, Cape Cod, MA) Hi 75 Lo 48 – We got a little chilly overnight, but it warmed up quickly when the sun came up. Last night we heard a pack of coyotes. There wasn’t just one or two, there were several, and it sounded chilling. We were told they are around and to keep dogs and cats inside at night, and to never leave them out alone. So far we haven't seen one, but one of the campground workers said they're seen quite often around here in the daytime.

Today we did some sightseeing, but not until we stopped for lunch at Three of a Kind Restaurant in Falmouth.

The interior decor is typical of a coastal seafood shack. 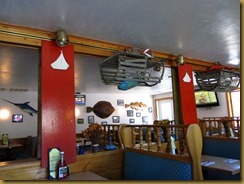 A lobster trap hangs from a ceiling beam. 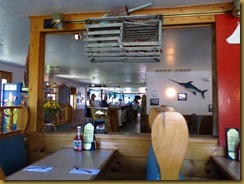 I wanted to try fried clams and lobster bisque this time. The bisque was barely warm but very tasty.

I had a clam roll, which is a pile of fried clams on a thick slice of toasted bread. It was very good.

Jim had a pastrami sandwich on a soft roll, with fries. He also had a cup of clam chowder. He said both were excellent.

We were fed and ready for some sightseeing. The traffic was heavy, but we made our way along the coastal road around the southern end of Falmouth and down to Woods Hole. Here’s a few of the pictures.

The island in the background is Martha’s Vineyard.

On the southwestern tip of Cape Cod at Woods Hole is the Nobska Lighthouse.

This is the view down the coast from the lighthouse.

We couldn't go inside the lighthouse. We stayed awhile and enjoyed the views, then checked to see if there was a geocache in the area. It turned out we were only a few feet from one, so we tracked it down. We’ve added another state to our list of caches. Here's the cache on the tailgate of the car (on top of a sheet I keep back there). I'm signing the log.

We also found a benchmark in a stone just off the highway. Benchmarks are markers, usually metal discs, that are placed as part of surveying operations. You can find them on buildings, and also on natural surfaces. They usually mark precisely measured locations for mileage or distances, such as the geographic center of a city. Benchmark hunting is an offshoot of geocaching.

This benchmark was placed by the Defense Mapping Agency. Jim worked for that agency for four years in St. Louis back in the 1980's while in the Air Force.

We headed back home and watched some TV, including the much talked about movie Sharknado, which we recorded a couple of weeks ago. It was really stupid, but I guess that was the intention.

I never knew about the Defense Mapping Agency. Learned something new, thanks. A day ain't complete until you learn something new.