(Massachusetts Military Reservation, Cape Cod, MA) Hi 77 L0 57 – As a lot of our readers know, I try to attend a ballgame whenever we’re near a city with a major league team. I’ve  been to well over half the 30 major league stadiums (some many years ago in my pre-RV’ing life). Three ballparks have always been on my bucket list: Wrigley Field in Chicago, Yankee Stadium in New York, and Fenway Park in Boston. I’ve been to Wrigley Field a couple of times (thanks to my son who lives in the Chicago area), and a friend and I went on a ballpark tour about 10 years ago to New York to see two Yankee games. So Fenway is the last of the “big three” that I’ve always wanted to see. Thanks to StubHub I found a ticket for today’s game between the Red Sox and the Arizona Diamondbacks. The seat was in the upper part of the lower deck far in the right field beyond the foul pole. That’s OK though, I was glad to get any ticket because the Sox sell out just about all their games.

I left at 9:30 this morning for the Braintree Station of the MBTA (Boston’s subway system), about 50 miles away. It took only an hour to get there. I was a little antsy about figuring out the subway system; how to work the ticket machine, what trains to take. But it turned out to be very simple.

The trip from Braintree to Kenmore Station (with one transfer) costs only $2.50 each way. Even adding the $7.00 cost for parking the car at the station, it’s still a good deal.
Boston Subway station. (Click on any photo to enlarge it.) 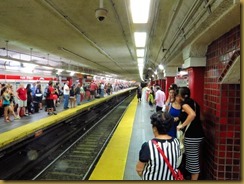 The subway trip took a little less than an hour, and the final stop at Kenmore Station is only about four blocks from Fenway. I didn’t have to worry about finding my way, all I had to do was follow the crowd.

Fenway Park was built in 1912, back when ballparks were built within the confines of the established city streets. The general look from the outside is of a large brick warehouse type building, and only the light towers and the tops of the grandstands let you know it’s a ballpark. 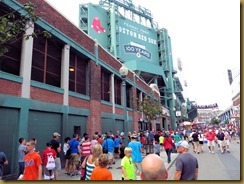 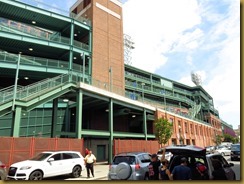 I got to the ballpark well before game time and the gates weren’t opened yet. The streets around the stadium are closed to vehicle traffic and it’s like a festival all around the place, with program hawkers, souvenir stands, food stands, and many bars. It makes for a wonderful atmosphere to get you in the mood for the game. 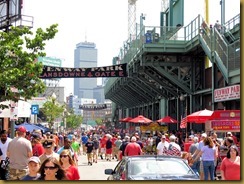 The Red Sox have had many great players in their history, but none was greater than Ted Williams. There’s a nice statue of him outside the stadium. It’s a touching scene of Ted giving his cap to a child. 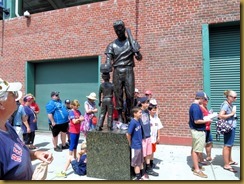 Finally the gates opened and I made my way through the turnstile. (I had an e-ticket with a bar code, and I’m always a little relieved when I make it through the gate with one of those, even more so this time since I bought this one from a re-seller.) Entering a major league ballpark on a beautiful, sunny always makes me a little goose bumpy. The perfectly manicured green grass and all those rows and rows of seats just makes me nostalgic. 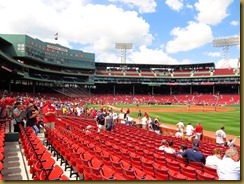 And to think, this is one of only two remaining ballparks that Babe Ruth actually played in (Wrigley the other one, during World Series games). That’s tradition, right there!

When baseball fans think of Fenway Park, they think about the Green Monster. It’s the 32-foot high green wall in left field. A ball has to be hit over the top of the wall to be counted as a home run. 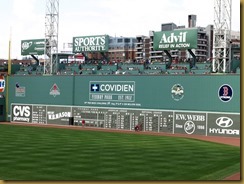 A few years ago they decided to put seats along the top of the Green Monster. They’re the most sought after seats in the whole stadium, and they go for over $100 each. 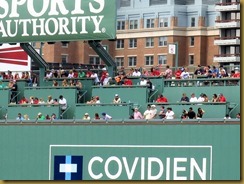 Fenway still operates an old-fashioned mechanical scoreboard, with workers inside who actually put the numbers up for the runs, hits, and errors. Here’s a close look at it, and you can see the open door that leads to the inside of the scoreboard. 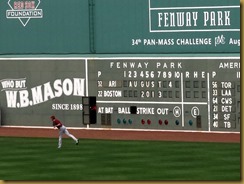 Fenway is over 100 years old, and as “charming” as it is, it sure does lack a lot of amenities of modern ballparks. The concourse is narrow and very crowded. 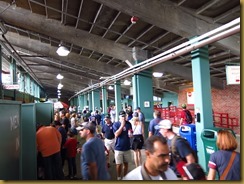 And another feature that you don’t see in modern ballparks is support columns. My ticket had the words “obstructed view” printed on it. When I got to my seat I found out what that means. 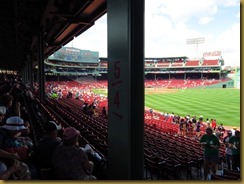 That post blocked my view from the entire middle of the diamond! I wasn’t too upset because, being by myself, I knew I could wander around and find other open seats during the game. (But that was harder than usual today because the game was sold out.)

The press box behind home plate is one of the most recognizable and famous sights if all of baseball. 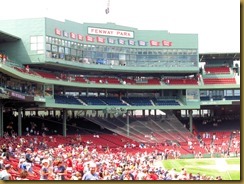 By game time the place was packed. 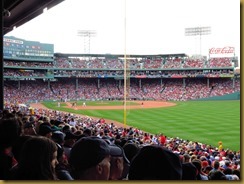 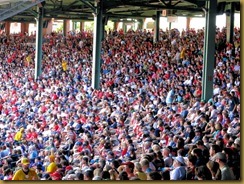 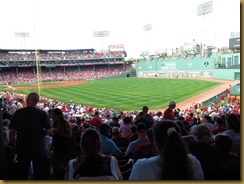 I didn’t sit in my “assigned” seat long before I wandered around. I managed to find an empty seat right behind home plate and enjoyed a couple of innings in a $100-plus seat. 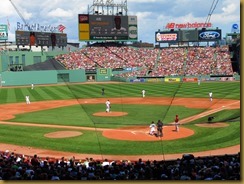 Here’s a few more random views around the ballpark. 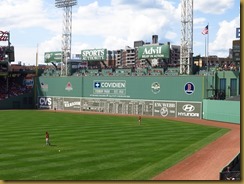 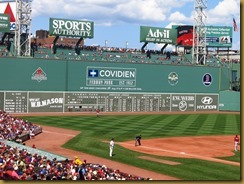 They sell “standing room” tickets for Red Sox games. You get to stand behind the rail at the top of the lower deck. 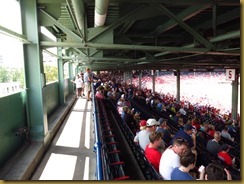 And here’s your view of the game from that vantage point. 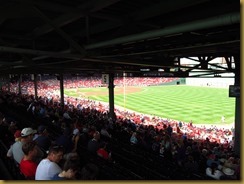 Walking back to the subway station I saw this interesting street performer. It’s not everyday you see a bagpiper in full Scottish regalia entertaining for tips. 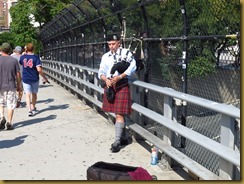 The trip back to the suburbs was very smooth, as was the drive home. It was a very special day for me. I’ll never forget my visit to Fenway Park, and I’m so glad I decided to make the pilgrimage.

Dee had a less special day than me. She stayed behind and gave our home a good interior cleaning, watched the NASCAR race, and generally “piddled” around the house. She’s awful good to me to let me go on my baseball trips and leave her alone for a full day. We don’t like being apart, but I know she’d be a lot less happy at the game.

Tomorrow we’re thinking of heading to Plymouth to do some sightseeing. Should be fun!

Plymouth is awesome!! Have a great time!

Aw, kind of makes me homesick.. I always loved going to games at Fenway, especially when the Sox win!

Awesome post of your day at Fenway!!
Thanks for sharing!!

Great post Jim! It's obvious that this was a very special day for you. I can remember getting "a little goose bumpy" myself at some of the racetracks I've been to in the past. It sure is great that this lifestyle allows us to pursue our passions.