We left mid morning to take a drive around the Bangor area. The downtown area is neat, with hills that overlook to the mountains in the distance. It’s very pretty. (Click on pictures to enlarge)

One of the biggest tourist attractions in Bangor is Stephen King’s house. The famous author of horror books is a Bangor resident and many of his books are set in the fictional town of Derry, which he based on Bangor.

The gate is unique, with spider webs, bats, and other gothic features.

The Kenduskeag Stream winds its way near Bangor. It's the site of the annual Kenduskeag Canoe Race in April, with thousands of canoes. Today is was quite shallow, but very clear.

There are many very large and beautiful houses in the area.

The churches in New England seem prettier than in other parts of the country.

A clock and thermometer on one of the downtown buildings.

We stopped at Cascade Park, just north of town. It has a pretty fountain.

And a two-level man-made waterfall. The cascading water gives the park its name. 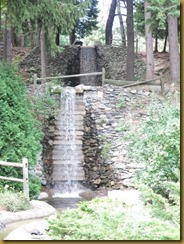 The Geocache app on my smart phone indicated a cache inside the park and a little ways in the woods. Jim trudged in, in his shorts and crocs hoping he didn't get poison ivy or a tick. But he wasn't able to locate the cache. Oh well, that happens a lot with us. :)

We drove north along the Penobscot River to the town of Orono, home of the University of Maine. It’s a very pretty campus.

We also drove around Indian Island, which is the Penobscot Indian Nation reservation. According to their website they are the oldest continuously running government in the world. The island has a school, bingo hall, a few tribal meeting houses, and a couple of neighborhoods. It looked like any other small village or town, but a little more run down than most.

We eventually made it back home. Jim got out the grill and cooked up some pork ribs for dinner. 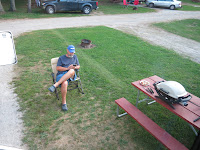 Bangor isn't a very large city (pop. around 35,000), but it's bustling and active and very scenic. We enjoyed our tour.

Maine is a beautiful place. But you know, if you look hard enough I bet you can find some beauty in all the states. Well, maybe there are a couple where you really have to look hard to find it.

We really enjoyed our time in Maine this summer too. I can see us returning there for the summer in the future.
Syl

We spent some time in Maine about 20 years ago. Most of our time was spent at Acadia National Park, but we did make a side trip to Bangor to see Stephen King's house. Good memories!

I believe that mountain in the distance might be Cadillac Mountain in Acadia NP. . .you are going to love going to the summit!

We plan to be in Maine summer 2015, thanks for blazing the trail.