A Day of Ships

(Joint Base Cape Cod, MA) Hi 84 Lo 60 – I’m fascinated with ships. My mother’s side of my family are all commercial fisherman and shrimpers, and some of that salt water must have made it to my veins. We try to see any Navy ship exhibit we come across in our travels. Today we drove about 40 miles to Fall River to see Battleship Cove, the world’s largest naval ship exhibit. 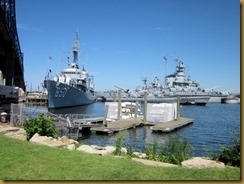 There are four naval ships and two PT boats on display. The “star” of the complex is the battleship USS Massachusetts, a veteran of World War II. 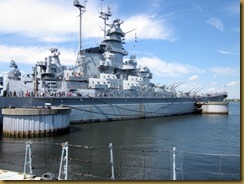 Battleships are known for the huge size and their huge guns. These 16-inch guns – there are nine of them on the ship - fire shells the size of a Volkswagen 18 miles. It must have been something to behold when these babies fired off! 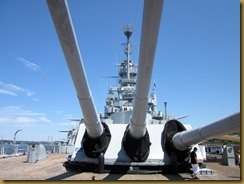 They were preparing for a wedding under the big guns on the forward deck. Interesting place to have a wedding. 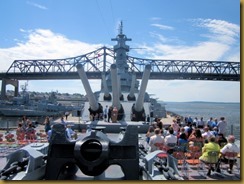 Also at Battleship Cove is the destroyer USS Joseph P. Kennedy, Jr. It was in service from 1945 to 1973. 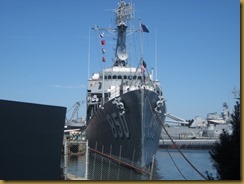 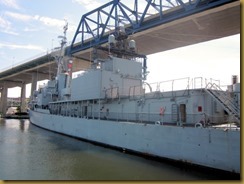 The submarine USS Lionfish, another veteran of World War II. 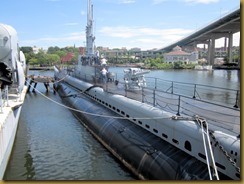 The fourth ship is the Russian corvette (attack cruiser) Hiddensee. I never knew ships were called corvettes. I wonder is that’s where Chevy got the name? All the ships were open to walk through (or in the case of the submarine, to squeeze through). It was fascinating to see how sailors live on these big ships. This is a berthing room on the battleship. 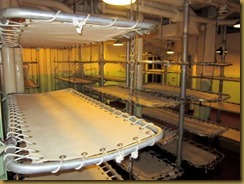 Imagine having one of those bunks as your only private space for months at a time. And it’s even worse when they had to “hot bunk,” when they had to share their bunks with other shipmates on different work shifts.

Inside a large building are two World War II era PT boats. These 75-80 foot long boats were built for speed and stealth. They would operate mostly at night, popping out from coves and inlets to harass enemy ships, and then sneaking away. They had a low profile and were hard to see. There aren’t many of them left. Most of them were considered expendable and were destroyed at the end of WW II because they were too expensive to maintain. The two at Battleship Cove are beautiful restorations. 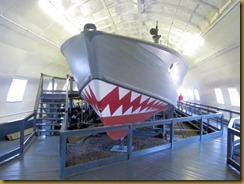 They carried four torpedoes, and a few .50 cal. machine guns. That’s not much defense. But with a top speed approaching 50 mph they could usually outrun the enemy. 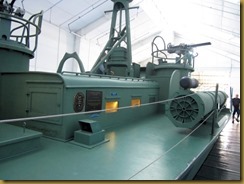 While we were there we saw a very large number of “fast boats” assembling on the river. Some kind of powerboat regatta was getting ready to start, and it was an impressive show. 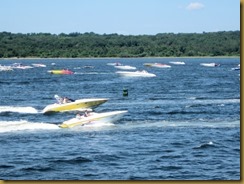 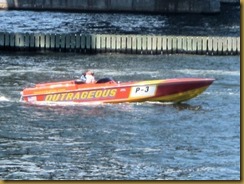 After they all got pointed the same way, they roared off under the bridge and were gone in no time. 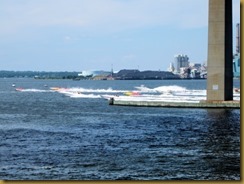 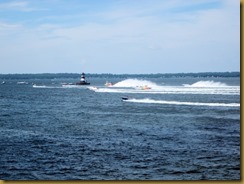 That was cool!
Fall River is a very pretty town, and we wish we had more time to explore it. 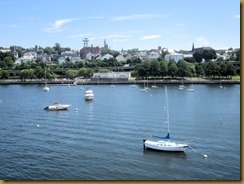 But we had another date with a famous ship. We drove about 35 miles back to Plymouth to see the Mayflower II. The great ship just returned recently to her harbor side dock after undergoing some renovations. 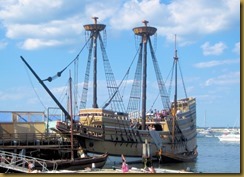 The Mayflower II is an exact replica of the original Mayflower that brought the pilgrims over from England in 1620. It was built in England in the 1950’s using the same materials and building techniques as the original. It’s 136 feet long, and it’s hard to imagine that 102 passengers were cooped up below decks for months.

It was a madhouse on board the ship (it was the weekend after all). But we got to climb around above and below decks. 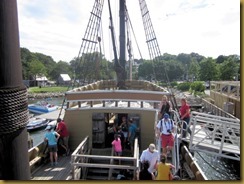 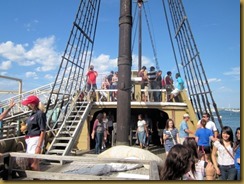 We enjoyed hearing tales told about the voyage by guides in period costume (and with period accents). 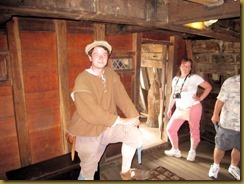 Didn’t we see this lady at Plimoth Plantation the other day? I think we did. 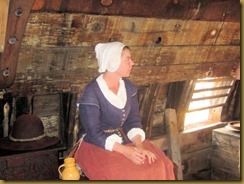 The ship sure does look authentic. One of the guides told us the British were very lax in maintaining their ships, so I imagine it’s difficult to maintain the Mayflower II so it’s in good working order but still has that well-worn look. 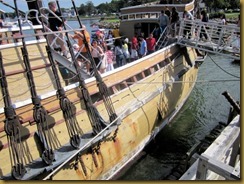 After touring the Mayflower II we had dinner at a nearby seafood place, Cabby Shack, that was recommended to us by one of our RV friends. The food was excellent. Dee had the lobster roll. She didn't feel like fighting with a whole lobster. It's a meal in itself with lots of lobster made like a salad on a toasted piece of bread.


That was a full day. And the fun doesn’t stop. Tomorrow we’re going to Boston.

When I was a young boy a book came out about PT boats. I can't remember if it was fiction or not but my parents read it to me at bedtime. I couldn't read yet, but believe me, until this day I still remember that book and just love PT boats because of it.

Do the Kennedy Library.... It brings back so many memories...

I would love for Kris to see all this

I've visited Fall River Battleship Cove many times over the years. Early in my CG career, I had to study steam propulsion for advancement and I had no access to any steam powered ships.

I went to Battleship Cove and explained my dilemma and they opened the engine room for me to examine. It's also HUGE!

Great pictures. From 18 until 59 when I retired my life was spent working with all kinds of ships:)