(Dover AFB, DE) Hi 91 Lo 80 – Less than half a mile from where we’re parked is the Air Mobility Command Museum. Air Mobility Command (AMC) is the organization of the Air Force that’s responsible for getting people and stuff to where it needs to be, anywhere in the world. So we’re talking cargo planes… big, hulking C-17’s and C-5’s. The AMC Museum has static displays of most of the cargo planes from thoughout the history of the Command, from its days as the Military Air Transport Command (MATS), Military Airlift Command (MAC), and today Air Mobility Command. There are planes inside a big hangar, and many more planes outside on the tarmac. But enough of history…

We planned to go see the museum today. After all, I was in AMC for most of my Air Force career, so I was looking forward to a stroll down memory lane. However, little did we know that there was classic car show scheduled for today at the museum. It’s the annual Dover Wings-N-Wheels Car Show. Airplanes and cars, two of my favorite things!

Although the museum is very close to us (we can see it from the RV park), we had to drive about five miles outside the base to get there. It’s a public museum, so it’s segregated outside the base perimeter. The show cars were parked all around the display planes, which was really cool to see. (As always, click on any photo to enlarge it.) 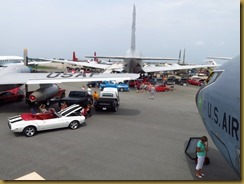 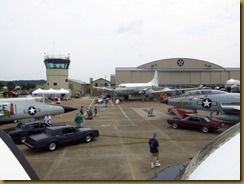 Here’s a group of Corvettes under a C-141 Starlifter. 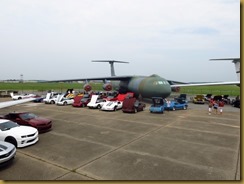 We walked around, admiring cars and climbing inside planes. Something you don’t usually get a close look at it is the tail boom on a KC-135 Stratotanker. This is the boom that connects to another plane in flight to refuel it. 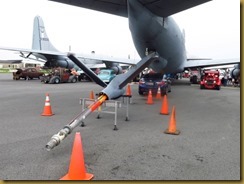 Inside, Dee got to lay on the mat back in the tail of the plane where the boom operator does his work. There’s some small windows that you look through to see down to the plane you’re refueling. 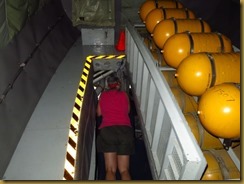 I was lucky enough to take one of my TDY (temporary duty) trips on a KC-135 and I got to lay beside the boom operator as we refueled a B-52 bomber. That was quite an experience!

While on board the plane, Dee tried out one of the crew seats. Imagine sitting in one of these seats for an 8-hour flight. (I’ve been there and done that!) 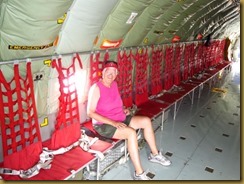 Now, on to some cars! There were probably over 300 cars at the show, so obviously I can’t show them all. So I’ll show some of the ones I like, mostly from the 60’s muscle car era.

I was a MOPAR (Chrysler) guy in my youth, so I’ll start off with the car I wanted more than anything in the world when I was in high school. A Plymouth Roadrunner. This is a 1969. 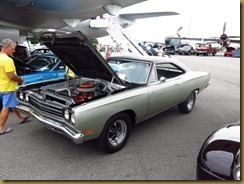 I’m not crazy about that silver/gray color, but I’ll take it.

Here’s my second favorite car from that era, a Plymouth GTX. This is a beautiful 1967 model. 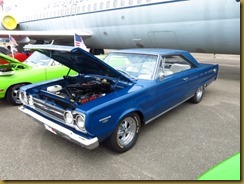 If you look closely at the glove compartment lid on this interior shot, you’ll see the owner has the autographs of Richard Petty and Dale Earnhardt. Very cool! 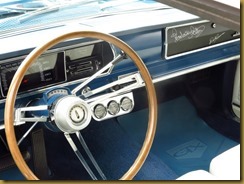 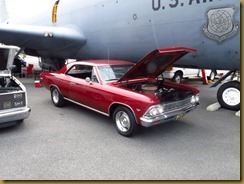 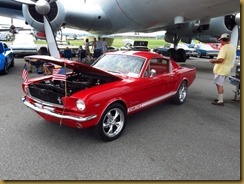 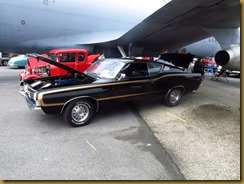 Many of the car owners gathered in groups under the wings of the planes, trying to keep cool. 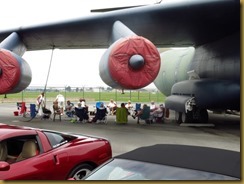 Interesting contrast of this Cobra 427 replica and the large tire of this plane. 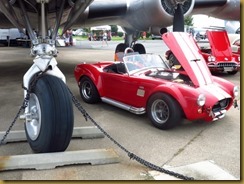 After checking out all the cars (and planes) outside, we went inside the hangar to see the exhibits (and to cool off!). The highlights inside were a WW-II B-17 bomber, and a C-47 “Goony Bird”, one of the first cargo planes. 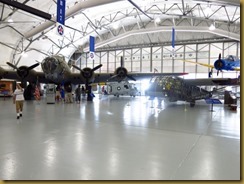 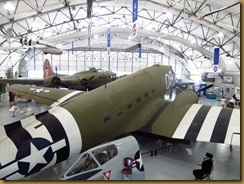 To show how far we’ve come in aircraft technology, check out the comparison of this cockpit of a C-130 turboprop cargo plane (still an AF workhorse)… 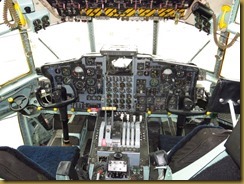 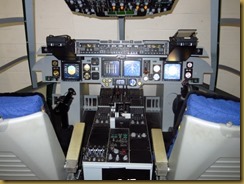 Part of the inside exhibit is a tour of the original Dover AFB control tower. The view from 107 feet up gives a different perspective of the outside activities. 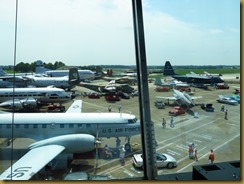 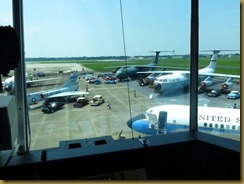 Don, our tour guide, gave us some interesting information about Dover AFB. 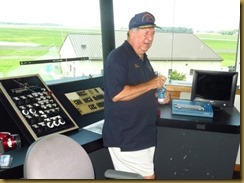 For example, I didn’t know that Dover was one of the emergency landing sites for the space shuttle. One of the two runways here is over 9,000 feet long, extended back in the 80’s to accommodate a shuttle landing.

A view of the active flight line of the base. The aircraft facing away from you is a C-17, and the on the right it a KC-135 with a couple of C-5’s behind it. 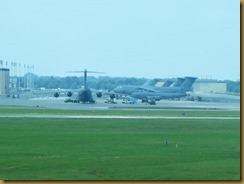 When we went back outside a C-17 took off right above us. 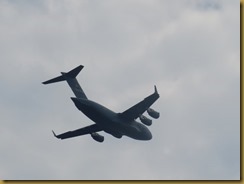 I mentioned the museum is close to our RV park. Peeking through the chain link fence we could barely see Tumbleweed in the distance. 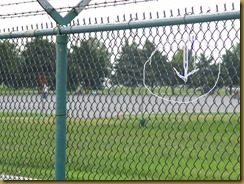 We bought a couple of sandwiches from a vendor and relaxed at a picnic table. We struck up a conversation with a lady and her two sons, and one of the boys mentioned there was a geocache nearby. Dee looked it up on her smartphone, and sure enough she got an easy find about 100 feet away. The bright blue color of the box sure helped! 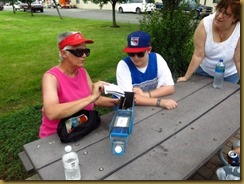 By now we were pretty tired, mostly from the heat. We headed back around the base fence to the main gate, and on the way we noted the slow moving traffic in the southbound lanes heading to the beach. 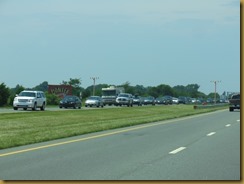 Locals told us the traffic is like this the whole 40 miles to the beach. Yikes!

We got back to our home and crashed for the afternoon. It’s so HOT outside! We have both air conditioners going, which really makes a difference in keeping us cool. For any of you future full timers out there, GET TWO AIR CONDITIONERS! Not only do they help when the temperature approaches 100 degrees, but you’ll have a backup if and when your main unit breaks down. (And they all break down eventually.) Trust me, you’ll thank me for the advice.

What a great day this turned out to be!

Cool memories. I got a chance to fly on a KC-135 out of McGuire AFB once as part of a military exchange program. I laid alongside the boom operator as he refueled a C-141. You could read the nametags of its pilots. After the refueling, I got a chance to "fly" the boom.

I'd wait in any kind of line to actually see one of the old cargo planes up close. They and the B-52 are my favorites.

What a wonderful day you must have had. I got to tour the inside of a tanker like that one. Also, got to see the unrestricted parts of a B-52. It didn't have any nuclear weapons on board at the time.

Very neat day. Cars and cargo planes what a great combination. I completely agree about two A/C's on a rig. Before retiring and becoming full timers we visited family in KS, OK and TX and learned the value of having two A/C's back then, wouldn't have it any other way. Great suggestion. Becki

Very neat day. Cars and cargo planes what a great combination. I completely agree about two A/C's on a rig. Before retiring and becoming full timers we visited family in KS, OK and TX and learned the value of having two A/C's back then, wouldn't have it any other way. Great suggestion. Becki

Looks like you had a great day. I'm always ready for a car show. :)

What a day, have to add that museum to our list.