A Quick Tour of Pittsburgh

(Beaver Falls, PA) Hi 89 Lo 69 -- We left this morning around 10am for Pittsburgh, which is only about 35 miles away. Our friends in this area had a couple of recommendations for what we should see. Top on their list was the Duquesne Incline.

Pittsburgh has a rich history of steel production, and they've come a long way since their early days of smoke and pollution covering the city. It used to be so polluted in the city that they would have to turn on the streetlights in the middle of the day. Now, the city is a sparkling jewel at the confluence of three rivers (Ohio, Allegheny, and Monongahela). We got our first view of the city as we approached it from the north on I-279. (Click on photos to enlarge them.)

We arrived at the Duquesne Incline station on the bank of the Ohio River. The website for the incline advertised free parking, but we saw signs saying it's $10.00 to park. An attendant came to get our money and I brought this up, and he said, "The incline parking is over there," over there being 10 feet from where we were parked, on the other side of a low chain fence. Wow... I'm glad I asked! We drove one aisle over and parked for free and went into the small "station" to buy our tickets.

The incline was built in 1877, is 800 feet long, and rises 400 feet to the top of Mt. Washington on Pittsburgh's south side. We got there before the crowds as there were very few people on the car when we  boarded.

The view out the front of the car shows the 800-foot long track to the top.

The ride to the top took only a few minutes, but the views were great. 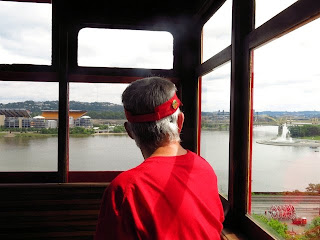 We reached the top, where there is a small gift shop and some displays about the history of the incline. There is a nice viewing platform outside.

The view of the city and surrounding area is really cool! I was disappointed that it was so cloudy that I couldn't get some nice, bright photos. But here's what we saw:

An overall view of downtown Pittsburgh. The point on the left with the fountain is the spot where the three rivers meet. (A cropped version of this photo is the new header photo at the top of the blog.)

A nice view of Heinz Field, where the Pittsburgh Steelers play.

And PNC Field, home of the Pittsburgh Pirates.

Both of the stadiums are across the river on the "North Side" of the city. This view of a car coming up the incline shows how it stays level as it travels up the 30-degree incline.

Here's a closer view.
We rode back down the the lower station and used the Google Maps navigation app on my smart phone to make our way across town. We headed to the Oakland district just east of downtown to check out the Cathedral of Learning. The Cathedral of Learning was recommended to us by some of our readers. It's the main building of the University of Pittsburgh (Pitt), and is the tallest educational building in the western hemisphere at 535 feet and 42 stories. The architecture is Late Gothic Revival, and it was built in mid-1920's. And it is truly beautiful! 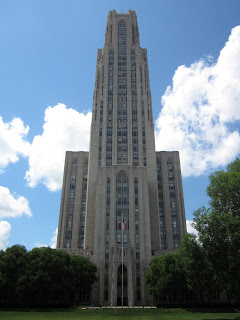 The entire first floor is the Commons Room, and the towering cathedral arches are awe inspiring. I was stuck using our cheapie digital camera because the battery died on my Canon G15 (I know, poor planning), so I wasn't able to get any really good interior shots. This is the best one, shot from the third floor balcony. 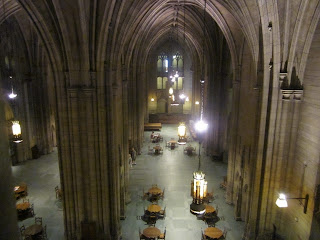 The building features International Rooms, which are classrooms designed and furnished in the culture of different countries. There are several rooms on the first floor that require a $4.00 charge each  for an audio tour. However, there are six rooms on the third floor that are free, so we saved our money and just checked out the free ones. They were sort of interesting, but nothing that screams "gotta see", at least in our opinion. Although the rooms are small, they're actual classrooms, and they're only open when classes are not in session.

Of more interest to us was the Heinz Memorial Cathedral next door to the tower building. 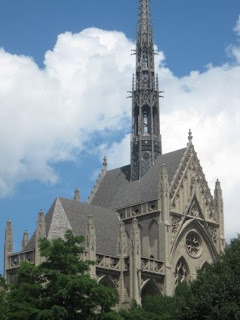 It's really beautiful, and we really wanted to go inside. However, a wedding was in progress, so we were locked out. :(

As we walked around the neighborhood I couldn't resist one more shot of the Cathedral of Learning. 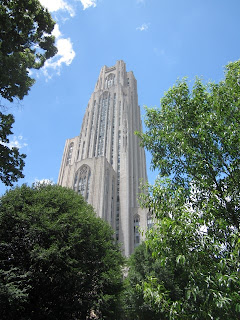 I knew from a tip from our friend Bill that the previous site of Forbes Field, the home of the Pittsburgh Pirates from 1909 until 1970, was close by. Since I'm a big baseball fan (also a big ballpark fan), I had to check this out. Sure enough, a few blocks away we came upon this marker. It gives a good snapshot history of Forbes Field.

Behind a few trees next to the sign is the original outfield wall.

Very cool! As we were leaving a nice, older lady asked us if we'd seen home plate. Huh? She said if we go in "that building over there," and walk to the other end of it, the home plate from Forbes Field is there in it's original location. We thanked her and set off to find it. The building is one of the Pitt administration buildings, and sure enough, at the other end of the long lobby we found it set into the floor under glass.

The small plaque says it's the original home plate from the final Pirates game in 1970. 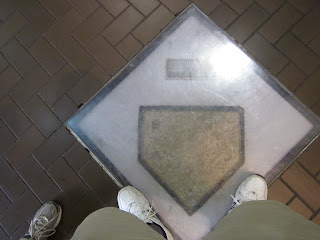 We would have never known about this if not for that nice lady. Thanks, whoever you are!

We were pretty hungry by now, so I checked my Google Maps app again and found a Subway restaurant a couple of blocks away. We had a couple of $5.00 foot longs, returned to the car, and made our way back north out of town. It was quite a fun day. We both wish we had time to explore more of Pittsburgh. But what we saw was very impressive, and we think it's one of the more attractive cities we've seen so far in our travels. Thanks Bill, Doris, Gary, Martha Jane, and blog readers for the sightseeing tips.

I used to love going to baseball games, and remember old Crosley Field, home of the Cincinnati Reds. The new and hi tech parks may be ok, but they are priced so that many folks who used to attend frequently can't pay the price anymore.

There is nothing like a city on a river!

That is a very cool photo of the downtown area with the water and all the bridges.

The one and only baseball game I ever went to was at old Forbes Field. My Dad was salesman for Heinz and took some clients to see a game in the Hiinz box right up next to first base. There was one unused seat and I got to go. I lived the first 35 years of my life just about 8 miles south of Butler. Now I live in Cut & Shoot, TX. I found yur blog from Gypsy's blog. Loved the pictures, brought back a lot memories. Thanks.