A Big Surprise - Maintenance for Tumbleweed

(Middlebury, IN) Hi 86 Lo 69 -- This was a very full day, with an unexpected surprise thrown in. We had to get up early and hitched up by 7:00 to get to Fox RV in Middlebury for some major RV maintenance.(click on the pictures to enlarge) 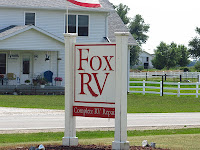 Fox RV did a lot of warranty work for Carriage, Inc. before they went out of business. Our Cameo is a Carriage product, so we were looking forward to some expert work on the lengthy punch list we had. 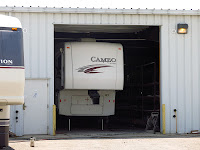 We left our home in their care and left for Clunette, the town I grew up in. One of my old school mates arranged for us to meet up with her dad, Jack Anglin, who owns the Clunette Elevator. He was our neighbor when I was growing up. He’s getting up in years, but he still has his hands at the business. He took some time to show us around the elevator property.

Clunette Elevator was started by Jack and his brother back in 1951. It was originally a storage and distribution site for locally grown corn, wheat, and soybeans. Over the years they've expanded the business and now they mill and sell animal feeds, and also process chemicals for liquid fertilizer.

It's called an elevator because trucks bring harvested grains from the fields and dump it into big hoppers, and buckets carry it up to the top of a long shaft where it's then dumped into storage tanks. They have about 1 1/4 million bushels of grain in storage at all times.

The grain is then gravity-loaded back onto trucks for further distribution and delivery.

I’m so glad I stopped to see him. We talked about the old days, who’s around and how much things have changed in the area.

We then headed to see another friend, Evelyn. She babysat me and my sister and is still very close to my mom. She lives on her small farm only a couple miles down the road from the elevator. When we got there her protective dog was outside, so we had to wait for her to bring Fido inside. But complicating matters was Billy, her full grown sheep, who was also trying to get inside the house. It was so funny!

She finally got Billy the sheep into the barn, and Fido inside the house. Along with a few more sheep, she also has a couple of mules on her farm.

We finally got in the house and settled down for a visit, when we saw an SUV coming up the driveway. That was unusual to begin with this far out in the country, what was really weird was it looked like mom and my sister in the front seat. WHAT? What a surprise! Doris brought mom up from Troy, MO so she could see her best friend Evelyn. They planned the trip to arrive the same time we did, and kept the whole thing secret from us. (Although Evelyn was in on it.) I was in shock! That’s the best surprise I’ve had in years.

Evelyn and my mom Vena

After sitting and talking for awhile we went to lunch at the famous Amish Acres in Nappanee.

We went back to Evelyn’s for a little while longer, then we had to leave to get back to to our RV before Fox closed at 4pm.

I'll turn the blog over to Jim to explain the rest.

Tumbleweed was still in the service bay when we arrived.

Larry Fox, the owner, said they were about to finish up when the tech discovered a problem with a brake disc that will have to be fixed tomorrow morning. (That explains the squealing we've been hearing.) All the other things on our list were taken care of. The main things they did was adjust our slides and examine the condition of our suspension. Here's where we were in for another surprise...

We have a Mor-Ryde RE suspension. It makes for a very smooth ride when towing. The suspension has shackles that connect it to the axle. I've been reading about some issues with these shackles wearing out prematurely, causing suspension failure. So I thought it would be a good idea to have Fox pull the wheels off and check it out. Well, it's a good thing we had this done. Take a look at this.

That elongated hole on the end of the shackle is supposed to be round. Below is a photo of both shackles and one of the brackets. As you can see, the hole is round on one end, and stretched out on the other, and the metal is about to break through the end. And one of the holes on the bracket is also elongated.

Larry told us we probably had less than 100 miles left before one of the shackles broke completely, which would have caused serious suspension failure, which would have stranded us on the side of the road at best, or caused a crash at worst. This is the second "close call" we've had, the other being the burned out transfer switch a couple of months ago. Dee and I always say a short prayer together before we depart on our trips, and we're so thankful that the Lord is watching over us.

Fox replaced the shackles with what's called a wet bolt kit. It's a heavy duty upgrade, with shackles and brackets twice as thick as the originals, and with bronze bushings and greaseable "wet bolts" and nuts. So if you have a Mor-Ryde RE suspension system, I urge you to have it checked, especially if you've got a couple of years on your rig. It's unbelievable that Mor-Ryde even has a "heavy duty upgrade" to something as important as a suspension. Heavy duty should be standard!

Fox moved Tumbleweed out into the parking lot where we're spending the night. We have 30-amp electric, and local TV channels via our rooftop antenna, so we're good for the night. I think tonight we'll be saying a little prayer of thanks.

Ah yes, been there, done that, including the roadside (parking lot) replacement of the shackles and repairs of broken brake line that was crushed when it failed. Stu upgraded to the wet set as well. ;-)

thanks for info...I'll make sure Sam checks our rig.
You had a great day of surprises. So glad many were pleasant...Guess the goat was wondering why he couldnt come in for a visit too, after all he is a nanny. :-)

What a nice surprise seeing your mom.

I'm sure glad you found the problem when you did. There's always something to worry about isn't there?

A day of surprises for sure. We are due for the wet bolts upgrade later this year.

Always good to find that kind of problem in the shop and not along the road:)

Awww what a sweet surprise to see your mom! And oh oh ohhhh oh those shackles! you have the RV Gods looking over you for sure!