The Best Vodka I Ever Tasted... Made in Pontoon Beach, IL?

(Edwardsville, IL) Hi 77 Lo 62 -- Today was an unexpected treat. We'd heard about a small craft vodka distillery in nearby Pontoon Beach. Factory tours are something we love to do in our travels, so I looked them up. Mastermind Vodka is the only premium vodka that's produced and bottled entirely in the USA, using American grains and locally-manufactured bottles. We called and made reservations for a tour for this afternoon.

Storms were looming in the west as we headed out. It was only a 20-minute drive to Pontoon Beach (an interesting name for a town with no beach of any kind for miles around). We managed to beat the rain as we arrived at the distillery, which is located in a surprisingly small building. 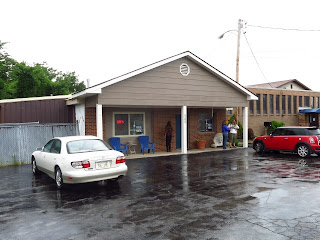 Mastermind Vodka is a very small operation. We're talking production in the thousands of bottles, versus millions produced by the big companies like Smirnoff and Popov. I like vodka, so I was anxious to try something new. For the price of our tour we received a couple of complimentary drinks and got to take home a .375 litre bottle of vodka. They also make LPR Moonshine, which we got to sample. Believe me, it's really powerful stuff!

Travis was our very knowledgeable and friendly tour guide. After our complimentary drinks and samples, and a short introduction to the company, he led us to the back room where the production takes place. It's a small room with a copper still and bottling machine. The whole production process is done by hand, including taping the corks and packaging.

Here Travis is explaining the distilling process. The copper still is in the background. 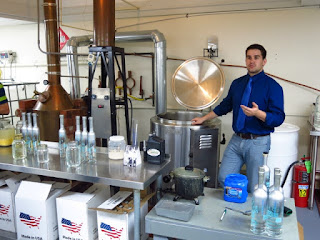 Here a worker is putting tape around the corks, one bottle at a time. 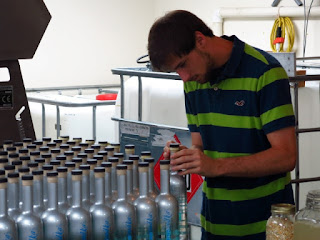 After the bottles are corked and taped, the neck of the bottle is dipped in silver colored liquid plastic to give it a distinctive seal. Here's one of the ladies on our tour dipping her own bottle that she purchased. 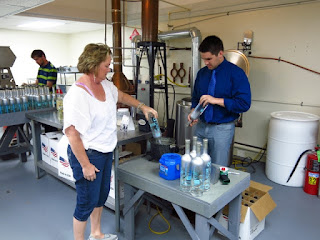 Travis said when they started out they dipped the bottles in wax. But they got a cease and desist order from bourbon maker Maker's Mark, who dip their bottles in red wax. Rather than fight an expensive lawsuit, the owner of Mastermind was thrilled that Maker's Mark even knew who they were and happily changed to liquid plastic.

The final product. Mastermind Vodka on the left, and LPR Moonshine in the squarish bottle to the right. 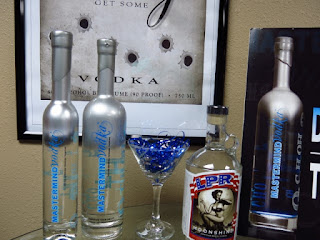 Mastermind won a gold medal at the 2012 San Francisco World Spirits Competition, and a silver medal at the 2012 New York World Spirits competition, so they know what they're doing. They've outgrown their small 1,200 square foot facility in Pontoon Beach, so some of their production is done at a facility in Missouri, using the same recipes and techniques. They're currently looking for property to build a larger facility and concentrate everything in one location.

Mastermind Vodka is very, very smooth and delicious, every bit as premium a product as Grey Goose or Belvedere. I know we're going to enjoy our complimentary bottle, and will probably buy another bottle or two at one of the local stores that stock it. If you're ever in the St. Louis area, especially on the Illinois side of the river, we recommend you look up Mastermind Vodka and contact them for a tour. It's well worth it. Thanks Travis!

I am putting that on my "visit list". Only one week until "closing".

Too bad their distribution area is so limited. You've piqued our curiosity and would love to try it :) We'll have to put it on the list. Thanks!

We too love factory tours, and just toured a rum distillery on our recent trip to St. Lucia. Yup, we brought some home.

Storms headed your way. Keep your head down. Your in our prayers.

I like factory tours, but wine is more my style. The first (and only) time I drank vodka was when I was about 19 yrs old. My mom found me asleep on the bathroom floor with my arm wrapped around the base of the toilet! I knew then I could never be a vodka drinker. I think I've had a bloody Mary once or twice and it wasn't bad, but I'm afraid of the stuff so I can't enjoy it.

What a great little tour. Have to remember it for our list too.

i'll have to look that place up for my next trip to il.
did i tell you that i got a second prize trophy for wine making? mine was a peach winei bottled it, it was 14% alcohol by volume. my friends wiped me out. i dont drink so, when i was sampling it ,i got quite pie-eyed during the whole process.. prior to the wine i tried making peach brandy. it turned out to be 200 proof; thats right 100% peach alcohol. WOW! what a kick.

We've got it on the map now! I am a Vodka drinker, so this would be very interesting to me.