(Edwardsville, IL) Hi 91 Lo 71 -- We had to get up at 6:45 to pick up Kendall and take him to school a book fair. All grandparents were invited and they had donuts, coffee and apple juice for everyone. The book fair was to raise money for the library to buy new books. We told Kendall he's probably the only one in the school who has his grand parents AND his great grandma to show around.

There was lots of art work on the walls, and one wall caught our interest. The murals were made with bottle caps of all shapes and sizes. Kendall said it took the whole school year to collect them. He was in the second grade when they were done (he's in fourth grade now).  (Click on the pictures to enlarge.) 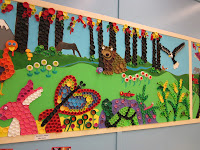 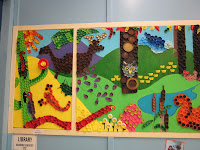 This is a close up of some of the caps. 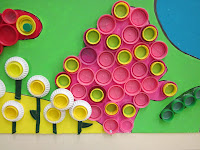 After we left Kendall at school we went to IHOP for some breakfast. Then went to Scott AFB to get a few things at the BX and groceries at the commissary. It was only 10:30 when we got back to the RV.

When we get up early, it makes for a very long day, to me anyway. Mom and I worked on some crafts while Jim tried to figure out why mom's Kindle Fire won't charge properly. He determine it most likely needs a new charger. We'll go to Best Buy on Friday and pick one up. Mom and I also played Carrom, a game you don't see much of anymore. It's played like pool, and you 'flick' little rings across a board with your fingers and try to get them into the corner pockets.

Another nice day with mom.

Such a special time - enjoy every minute. I would give anything to have another day with my mom.