(Avon Park, FL) Hi 75 Lo 58 – It was another cool and windy day, not normal but I don’t think any weather has been normal this year. It did warm up nicely this afternoon.

We're not Catholics but we kept an eye on the news today to see if a new Pope would be elected. We watched for the smoke from the Vatican, and sure enough this afternoon white smoke appeared, signaling a new Pope has been elected. It’s a history making choice since the Pope is from Argentina, the first time a non-European was elected.

We went to Bible study at the clubhouse. There’s only two meetings left, then it’s all over for this season. I went walking with Kathleen after the meeting.

Late this afternoon we waxed part of the RV. We'll do a little each day but we’ll get it done before we leave for sure. It’s looking great!

I have the second afghan done. I’m all done with crocheting unless I do little projects.  Here’s the second one.

This one will also go to the military through Project Linus. It’s been fun making things this year. It sure has helped pass the time. Here are the other two projects I completed: 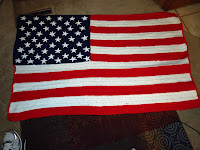 I read some blogs and played some computer games, and we watched some recorded shows and took it easy the evening.

I'm sure the Project Linus recipient of your beautiful afghan will be very blessed.

I love your crochet work.

I love your crochet work.

Great job Dee!! And so nice of you to donate the afghans to such a worthwhile charity.

Wow.. how nice you donated your wonderful creations!

Your afghans are really nice and fantastic of you to donate them. Like your vest too.