(Mayport Naval Base, Jacksonville, FL) Hi 77 Lo 61 – I knew today would be very active on the Navy side, and several times we heard the horn that sounds before a ship leaves port.

Jim doesn't think we should post so many ship photos because he says they all look alike. But this is for those that love ships and want to see them.  (Click on the photos to make them larger.)

Frigate USS Samuel B. Roberts. It came in early this morning and left again in the afternoon.

While the Navy ships were coming and going there was also civilian cargo ships coming into the Jacksonville port.

We missed a few other ships because we went to the commissary for groceries. We also stopped at the Navy Exchange where I bought Jim’s (early) Christmas present. He's been wanting a Keurig coffee maker and we found it on base at a good price.

We got back and put away the groceries, and by that time Ken called us to say he was outside the base gate. We went out to pick him up and went back to the Safe Harbor Seafood Market and Restaurant for lunch. We love eating there, and it’s very close to the base. I also bought some fresh fish for the freezer, including salmon, both farm raised and wild. I’m anxious to see if we can tell a difference.

Our view from our lunch table.

Pelicans waiting for their dinner.

We brought Ken back to the base with us and gave him a tour. Then we settled into our camp chairs in front of our RV to watch more ships come and go.

The highlight of the day was watching the amphibious assault ship USS Bataan get under way. That's the ship that had the college basketball game on deck last weekend (or half the game anyway, it was cancelled at halftime due to condensation on the court). One of our neighbors called it a BGB (big gray boat). :)  We walked down to where it was docked to get a closer look as three tugs maneuvered it away from the dock. 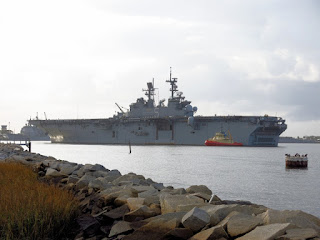 They had to turn it around 180 degrees before it could proceed under its own power. 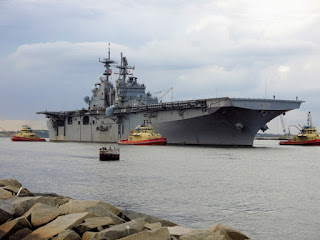 Ken and Dee watching it head out to sea. 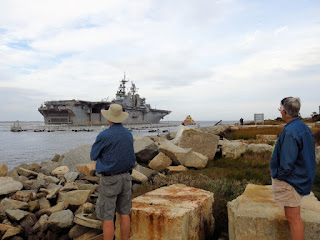 Such a beautiful sight! 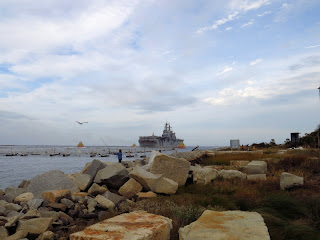 This was one of those days that make you so proud to be an American. We talked to a lady who was taking photos of one of the ships as it was leaving. Her husband was on board, and she has no idea where the ship is going or when it will be back. I felt for her. It’s not an easy life for the family waiting behind.

Jim took Ken back to his car and fueled up his truck. We had dinner then settled in for the rest of the evening. It was a very active and exciting day!

Looks like a great place to hunker down and I would be in awe watching the ships. My Dad was a Navy man and still LOVES telling stories of "back in the day"! Enjoy!

I'm sure Sam hasnt seen this yet..he'll love the pics. Hope you guys head our way when the weather warms up
Donna

All I do when I am at Mayport is watch the ships and take lots of pictures of them going by:)

I would love to be camping in a site like that!

And all Air Force planes look alike, too! ;c)