(Murrills Inlet, SC) Hi 64 Lo 39 --   The day was a great one, with lots of the great outdoors. As usual, there were lots of impromptu meetings in the street.

Rick came by on his Trikke. It's an unusual 3-wheeled scooter-type thing that you power by shifting your weight back and forth. He let Jim give it a try.

Here's one of the Sea Eagles that was taken out yesterday.

Jim went with his family to Camping World in Myrtle Beach, and while he was gone I joined several other ladies on a long walk around the park.

Kris, Ray, Mike and Terri along the path. Kris is checking out an alligator. 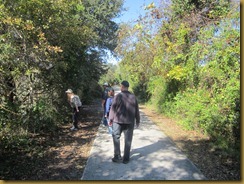 We saw this alligator in the water...

...and this baby sunning himself.

There were some turtles and a snake, but I didn’t get and pictures of them. The snake was laying quietly and we didn’t want to disturb it.

Our trail took us through this swamp.

We saw many beautiful birds.

When we got back to the campground we went to the beach and found Jim, his sis, mom and aunt there relaxing on the sand.

Sitting at the beach, Lee and Martha, Mike and Terri, Laurie and George

We had to be back at the campground by 4:00 for a swap fest. Before the swapping, the gals were playing spoons. It’s a vicious game of cards, whoever gets four of the kind first, grabs a spoon. It was hilarious.

Everyone brought something they wanted to get rid of, and it was up for grabs by anyone who wanted it back. The 'leftovers' will be left near the dumpsters with a 'Take Me' sign on them.

The evening again ended with a campfire. It’s been  a great day with everyone.

I can't thank you enough for NOT taking a picture of that snake! :)

We were at Camping World too. Ran into Paul and Marti. It was a popular place yesterday :)