(Avon Park, FL) Hi 76 Lo 49 -- Today we watched some TV, I worked on my vest and cleaned up the RV, and we both did our walks. I did one mile today, and Jim did three and a half miles in an hour. There's a neighborhood with a lake across the road from our park which became part of his walking route.

I spent some time outside under the awning working on my vest.

The Avon Park Christmas Parade was tonight. Several of our friends here said it was well worth it so we decided to go. We took our chairs and got a good spot right on the parade route on Main Street. Jim recently got a new camera that does a very good job of taking photos at night, so we got some pictures. (Click on photos to enlarge them.)

Right across the street from us is the Jacaranda Hotel, with the mossy trees giving it an eerie look.

There were some real pretty floats.

Lots of people on both sides of the street.

This was my favorite float. The wings moved up and down.

There were a lot of classic cars.

You can't tell if this car is coming or going. It steered on both ends, and it was fun watching the two drivers maneuver it. 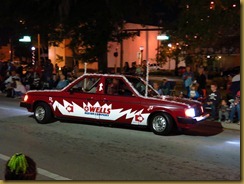 Another favorite, a car in a box.

At one point the street lights went out, making it more difficult to get good pictures.

But I did get Santa and Mrs Claus at the end of the parade.

It's been years since we've been to a parade, and it was a great night to go. We're glad we went. Just one of those fun times in a small town.

We just love parades too. Christmas ones are icing on the cake!

Small towns are the best. Can't wait to see the vest when you are finished!

And I like the fact you're wearing shorts and a tank top...We're here in VA and it's cold this am! We should be back to Cedar Point by the weekend where temps will be in the high 60s.

Sounds like fun. It seems like Christmas there, but there isn't much sign of it down here, except for the North Carolina Christmas trees we saw at the grocery store.

I also noticed the shorts and tank top, and I'm jealous . . . but we'll be in Florida by the weekend!! The parade looked really fun!