(Willis, TX) Hi 84 Lo 66 --  With nothing planned today we decided to do a little cleaning of the outside of the RV. It's been a long time since we washed it, and it was a mess with bugs all over the front cap. Little did we know that Texas has seasonal "love bugs" just like Florida. We ran through a lot of them on the trip here from Athens. Removing dried bugs is easy with Bounce dryer sheets and a little soapy water. We had to fight off some ants while we were outside. Fire ants are a problem in this area. With all that done we showered and relaxed the rest of the afternoon.

We watch the Joel Osteen program every Sunday, and we thought we'd take a drive to Houston to his Lakewood Church for the Saturday night service. It's about an hour drive to Houston, but there was an accident on I-45 which slowed us down. We made it on time though. This was my first time seeing Houston. Jim went to the Astros baseball game Thursday night. 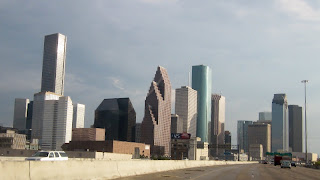 We were very impressed with the Lakewood Church. It's in the former Compaq Center, the arena where the Houston Rockets NBA team used to play. When we told them we were first time visitors they escorted us down to the second row right in the center. The service was quite a production, part revival meeting and part rock concern. There was a very professional band and choir, and soloists who performed uptempo music for about 40 minutes. Then Victoria (Joel's wife) spoke for about 10 minutes before Joel's 30-minute message. After the service we had an opportunity to meet with Joel. 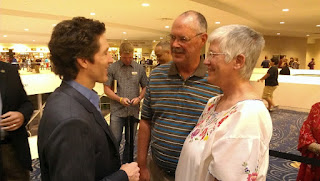 It was a strange feeling being at a "church" that seats over 18,000 people. We were told they bring in a total of about 60,000 people for all the services and classes every week. Everyone on the staff we came into contact with were very friendly and welcoming. It was quite an experience and one we really enjoyed.

On the way home we stopped for a late night snack. It was quite an evening in Houston. We wish we had more time to take in some more sights. But we'll be back some day.

I wish we had been in town and been able to show you around Houston.

We have watched Joel Olsteen on occasion, also, and wondered how the church was... We really enjoy David Jeremiah when we are on the road - we hope to visit his church in CA one day... that's on our bucket list! Thanks for the description of Lakewood! Really enjoyed your post.

We also hope to get to Lakewood Church when in the Houston area. How nice that you got to meet Joel in person!

Pretty cool to worship in that setting. Always wondered how it would be. Never got to the Crystal Cathedral before all that mess happened with them.

So glad you got to the service. Real neat that you got to meet Joel.
I bet you are packing up today. Will miss you both but so glad we got to spend several days together. See ya next time! Safe travels..

That sounds like an amazing church service. 18,000 people? Wow.