Meeting with Old and New Friends

(Scott AFB, IL)  Hi  89 Lo 57 --  Sunny, warm, and humid. It was a wild morning. Before I got up Jim got a call from Donna and Sam, who we were planning to meet at the St. Louis Arch today. They planned to arrive at the Arch grounds at 10:30, and they were bringing another RV'ing couple with them who's staying in their driveway. We had to move the rig to another site today, so Jim told them we wouldn't be able to get there until around 11:00. She said no problem. Jim got me up and we rushed to get the rig ready to move. Jim towed it over to the dump station for a quick dump and then backed it two sites down from where we were. While he was dumping I moved the chocks and stuff over to the new site. We got the whole process done in one hour and 15 minutes, and that includes Jim re-aiming the satellite dish! We left at 10:30 for the half-hour drive to St. Louis.

We met in Laclede's Landing, which is the cobblestoned nightlife district on the riverfront just north of the Arch. There's a story I have to tell you about our meeting today. Sam and Donna, who we met last year in Troy, MO while at my sister's, had emailed me to say there was a couple coming to their place who wanted to meet up with us. Donna never mentioned their names and I haven't been reading their blog to know who she was talking about. Meanwhile, I got an email from Sandra and Elaine, both from Canada, saying there was a full-time couple near us, Kevin and Ruth, and gave me their website. When I read their blog I saw that they mentioned they're coming to Sam and Donna's in Missouri. I put two and two together and figured out that we'd be meeting Kevin and Ruth. Some of you have been reading their blog "Travel with Kevin and Ruth". They're from Ottawa, Canada and are traveling on their way to Mexico, where they plan to stay for a couple of years. 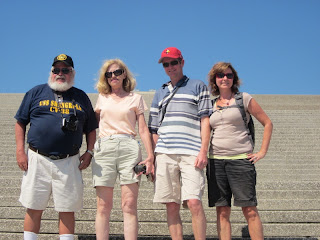 We went to the Arch and Donna, Kevin, and Ruth took the ride to the top of the Arch. We'd been to the top several times, as had Sam, so the three of us waited for them in the museum lobby area. While outside Jim got this photo of the arch with a jet contrail visible through it. (Click on photos to enlarge.) 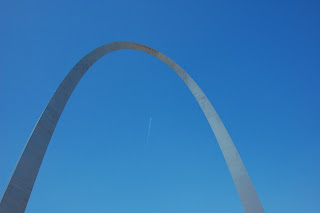 We then walked across the street to the riverfront and took a one-hour sightseeing cruise. 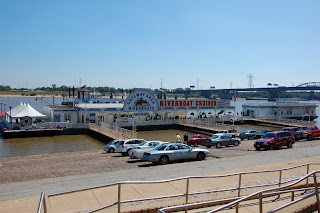 That's something we have never done, and it was nice going up the Mississippi River and seeing the Arch, downtown, and the bridges from a different perspective. 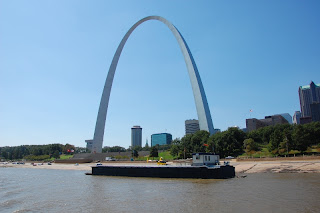 I love the architecture of the Eads Bridge, which was built in 1874. At the time it was the longest arch bridge in the world. 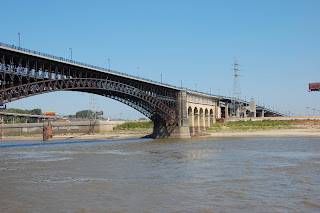 The Edward Jones Dome, home of the St. Louis Rams NFL team, as seen from the river. 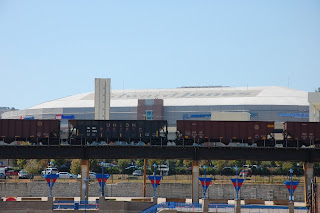 Another view of the Arch. The narrator called this the "non-postcard" view. Viewing it directly from its north-south axis, it looks more like a spire. 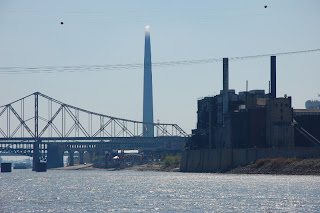 After the cruise we all went to lunch at "Show-Me's," a locally-famous eating spot at Laclede's Landing. The food was good, and we spent over two hours just sitting and talking. We planned to also go to the Anheuser-Busch Brewery Tour, but it got too late. It was so great seeing Sam and Donna again, and now we're so happy to have Kevin and Ruth as new friends. They told us all about their travels and how they boondock every chance they can in their 28-foot motorhome. They love Mexico and are looking forward to an extended stay down there. We loved hearing all the stories about the places they've been, and sharing our experiences in their home country of Canada this summer.

With hugs and handshakes all around we said our "see you laters." We got home in time for Jim to watch his Miami Dolphins lose to the New England Patriots on Monday Night Football. He'll be cranky for a while, but it won't last long. :)

Yeahhh on the visitation....looks like you all had a great day...I would not have been able to go to the top of that arch....

Love meeting up with friends. Old and new. I rode up in the Arch several years ago. Very interesting ride. My Jim's Redskins won their game so he's not cranky.

Sounds like a good time was had by all. You posted some grat photos of the Arch. It is such a landmark.
Chris

I am glad you had a great day. It is always fun meeting up with bloogin friends. Photos of the arch were awesome!
Have fun & Travel safe
Donna

Awesome! Glad you got to meet them!

I remember that bridge. Isn't that right by the Casino RV park and across the river from the Arch?

We had a great day with you guys, but it was too short! Hopefully we'll meet up on the road someday.