RVs will be one of the categories during an upcoming broadcast of
"Jeopardy!" CBS's popular quiz show.


On Dec. 9 long-standing host Alex Trebek will give three contestants a chance to test their knowledge of one of America's popular pastimes.


The "Jeopardy!" Clue Crew visited the RV/MH Hall of Fame in Elkhart,
Ind., in August to film a full set of clues all related to RVing.


"The show approached us," Al Hesselbart, historian at the RV/MH Hall of Fame, told RVBUSINESS.com. "We have been so well promoted this past year as a center for the celebration for the RV Centennial. We have had a lot of air time for all kinds of different media."


The questions were filmed at closing time so there was no need to close the hall of fame to visitors.


"The filming did not interfere with museum operations," Hesselbart said. "We have shot a dozen TV-related things in here and have not needed to close down for any shoots."


The Clue Crew, including two of its three roving correspondents, Jimmy McGuire and Kelly Miyahara, took about seven hours to complete the shoot. Since the Clue Crew's creation in 2001, the team has recorded clues in over 200 different cities, spanning 45 states and 33 countries.


"It was really startling to me to observe them," said Tom McNulty, hall of fame vice president, who was there to host the crew. "They did a bang up job. I thought it was really fun and they were very appreciative of us."

It might be fun to watch to see what their take is on the RV'ing lifestyle.
I saw this bird coming back from playing shuffleboard today.  I think it's an egret of some kind.  It's sure a different color than usual if it is, but I know nothing about birds.  I thought I'd put it on the blog for the bird watchers. 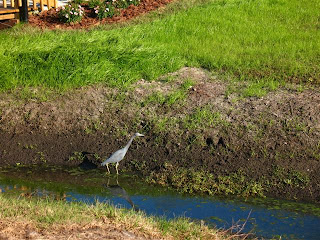 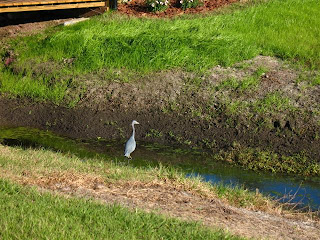 We had a normal afternoon.  We walked, shuffled, and caught up on TV shows, and just kicked back in paradise.

That 'Jeopardy' will be very interesting. Thanks for telling us about it.

I wote about Readability back in March:
http://pennys-tuppence.blogspot.com/2010/03/your-spinebagels-butter-readability.html

It does come in handy. Thanks for reminding me about it.

Hey you two I miss seeing you and try to read about your adventures when we are settled somewhere...that has not been the case lately. Stay safe

the bird is a blue heron, it also must be wintering in fl. they are common up here in western new york state. dom