Remains of the Wedding - NASCAR Championship Race to the Finish

(Wauchula, FL) – It was sunnier than yesterday when we first got up, but the clouds rolled in, and we got some sprinkles from time to time but no rain.  It’s still in the high 70’s, and almost hit 80 today.

On my walk I decided to see what’s left from yesterday’s wedding. I saw them working most of the day, but wasn’t sure what was accomplished.  The party kept to the campground rules, all quiet at 10pm.  It sounded like they had a really good time. I’ll stop by the office in the morning and hear about the details.

There used to be a white sheet on the side over those wood planks.

The dance floor with the light bulbs 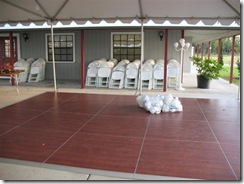 Some of the flowers that were around the ceremony area.

It looks like a lot of clean up will be done this week.


We were both waiting all day today to see the NASCAR race.  Three drivers were in the running for the championship and this was the last race of the year.  They kept the points total for each listed throughout the race, and it was fun watching them jockey for position during the race.  At the end of the day Jimmie Johnson won his fifth championship in a row, beating out Denny Hamlin and Kevin Harvick. That’s quite an accomplishment.

Have you ever had days you planned on doing something constructive, but when it came right down to it you’re not in the mood?  I had one of those days.  I need to read some of the magazine articles before throwing them out, but just didn’t feel like it today.  I did a few chats, emails, and read some blogs and that’s as far as I got.

Tomorrow we’ll get the RV ready for our trip to Melbourne on Tuesday. There’s not a lot to do on the inside, just some re-arranging of the refrigerator contents.

Another week has gone by in paradise.

Yea, rub it in, that paradise comment. Today we winterized out Journey. But we realized this will be the last time we do that, next year...paradise!

Yah.. and this week we are facing snow, sleet, and ice... while those Floridians are getting sunshine and balmy breezes!