Last Day in Melbourne – Dinner Out

(Melbourne, FL) – It’s our last day in Melbourne, we move back to Wauchula tomorrow.  We both like it here, and we’ve been really busy with family so we've had fun.

This morning we drove across the causeway to check out another park in the area.  We're always looking for options for places to stay during the winter.  This park is a half mile from the beach, but it’s real close quarters and mostly park models.  But we wouldn't rule it out as the price is in our range.

When we got back I walked the park. It’s really big.  A man was walking real slow in one of the lakes.  I asked him what he was doing and he said he was picking up frisbies. They play frisby golf here and apparently a lot of the discs land in the lake. 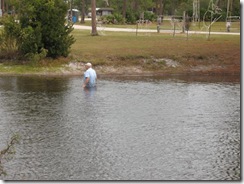 Just behind that was a turtle laying eggs.

There are several lakes here, including two swimming lakes.

Andy and Dee came by later in the afternoon to see our home.  After we socialized for a while we went to dinner at one of their favorite places, Grills Restaurant and Tiki Bar.

What a place!  There was a small band playing when we got there, but we sat far enough away from them that we could talk and hear each other.  We sat out on the deck, which looked out onto the Banana River and the causeway bridge.

Andy and Dee wanted to see the lights festival at the park, so we went back to the park and waited in the rig for the start time of 6pm.  At six we started the drive around the park and noticed that only about half of hte lights were on.  We made a second loop and it was the same.  We had a hard rain shower so we're thinking some of the lights shorted out.  They ended up turning off all the lights for the night and refunding the admission fee to those who had paid.  We got to see the lights last night, but Andy and Dee were a little disappointed.

We said our goodbyes to Andy and Dee, then settled in for a evening of TV.  We had recorded "Miracle on 34th Street" earlier today so we watched that.  We like to watch some of our favorite Christmas movies this time of year.  The rain is gone for now, but we may get more overnight and tomorrow.  I hope we don’t have to hitch up in the rain tomorrow morning.  The last few days have been great in this area, another little corner of paradise.