Time for Blood - The Leak

(Garner, NC) - Early morning!  We had to get up and be in Cary by 8:45, so it was no breakfast and out the door for our blood work today.  This is the week for doctor appointments.  We're getting everything started here and then go to Florida and get a doctor there for the six months. We'll see how it works out.

Since we were already in town Jim did the laundry, and at the same time I got my winter hair cut, so no short cut like I normally do. I got a couple of things we needed at Rite-Aide, checked on my eye exam time for tomorrow, picked Jim up at the laundromat and came home.

We ate some lunch, then Jim went up on the roof to check around the TV antenna where rain leaked in. He found the problem.  A rubber grommet where the cable goes into the roof was pulled out.  He pushed it back on, lubricated the mechanism, and also touched up some caulking in another area.  Now we'll see how it does next time it rains. We still see an occasional stink bug in the the rig that we brought from Pennsylvania, but we can't see where's there's a lot of them so guess they'll either leave, or we'll take them to Florida.  It's not a southern bug so people around here don't know what they are.  I grew up in northern Indiana and we had them from time to time.  They're aggravating, but they won't bite (so they say).  I borrowed this picture from another blogger. 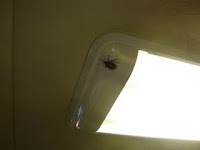 We didn't do much the rest of the afternoon.  We did put out the awning for the first time since the bad rains we had a couple of weeks ago.  It had a lot of moisture rolled up in it so we let it dry in the warm sun.  It was in the high 80's today and we may have reached a record temp for this date.  Jim got out the grill for dinner and we topped off the day with grilled steak (for Jim) and grilled brats (for me, I don't like steak).  We also grilled asparagus spears for the first time, which was really yummy.  A nice way to end the day!

Wow! A husband that does the laundry...what a catch! ;c)

Hate to tell you but I grew up in Central Ga/Ala and Central Florida and am well acquainted with stink bugs. We do have them here in Raleigh, too, but the season is pretty much past (July/August is about when they are the worst).

I am glad you guys care enough about each other to keep up with your "check-ups". Unlike many family members I have known in my life that believed that if they even admitted that they should have a check-up, they were making it possible to have problems develop! Talk about blind faith?

Ignoring death does not make anyone live forever so why should ignoring one's health prevent it from becoming bad?