(Mayport, FL) – I got up late today, so I missed a couple ships that came into port.  Jim got the pictures.

I sat out with the neighbors with coffee then decided to walk down to the beach with Jim.   I can’t keep up with his pace so while he went on his power walk down the beach I decided to walk slowly and sit on some steps and watch the sea gulls.  This looked like a sea gull meeting.  There was only one squawking bird in this entire flock.

There were two birds that I think wee terns, and it was neat how they’d go out on their own and find some food, and the sea gulls would fly to where they were to get some.  I watched the birds for awhile.  It was a good way to pass time and get some sun.  When Jim returned we stayed quite a long time on the beach, just watching boats and waves.  Jim sat on the jetty to watch a few boats. 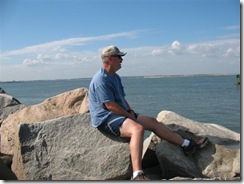 View of the jetty looking toward the RV park.  The channel is to the right.

We had another surprise today.  Another submarine came in this afternoon.  Although there's a big sub base just north of here in Georgia, we're thinking they stop here for major maintenance.  There's a big regional ship maintenance organization on this base.  This one is a U.S. attack sub, and is a lot bigger than the British sub that came in yesterday.
It's really long, it goes under water then you see the tail. 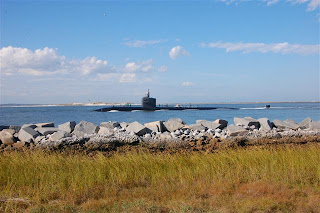 Our friends Al and Vernine asked us to go to Sticky Fingers for dinner.  They picked us up and we took off for Atlantic Beach for a great meal together.

When we got back to the park we stayed outside and had a little wine and watched lightning in the distance.  It was warm and breezy and we enjoyed the wine and conversation.  They’re leaving tomorrow.  I hate goodbyes but we’re hoping we see them again while we’re here in Florida.  They’re going to different RV parks here in Florida all winter.

Glad to see you having such a wonderful time.

alberta has sent you a link to a blog:

you two seem so happy.I wish you happiness always. love ya mom