(York, PA) – It rained on and off all night, and during the day it was the same.  We left around 9:30am for the Harley Davidson factory tour.  We weren’t allowed to take cameras in the factory so I took some pictures before the tour of some of the bikes and exhibits in the visitor's lobby.

My favorite is the three-wheeled Tri-Glide.  I would feel safer on this rather than a two-wheeler. 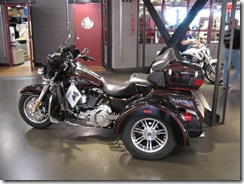 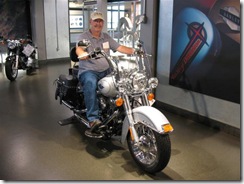 A couple of others. 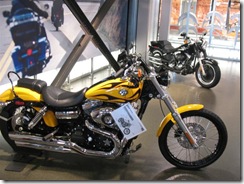 This is a display of some of the parts they manufacture at this plant. 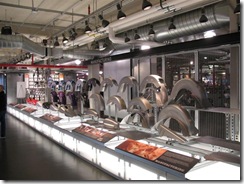 A frame and engine assembly. 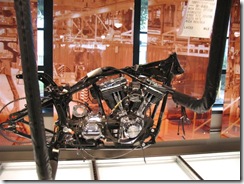 This is what an almost-completed bike looks like on the assembly line.

We were led on a one-hour tour of the production facility.  It was quite fascinating to say the least.  We saw everything, from how they manufacture fenders, fork assemblies, wheels, and all the other parts, to the assembly line where we saw the process from bare frame to completed bike.  We even saw where a guy "road tests" the finished bike on a stationary roller.  H-D takes pride in their flawless paint jobs, and we found out that it takes 12 hours to complete a two-tone painting process, but only two hours to assemble a complete bike on the assembly line.  It was a very informative and entertaining tour, and we recommend it to anyone who either likes motorcycles or is interested in seeing a large assembly line in action.

We had some lunch then headed in the rain to Wolfgang's Candy Factory.  We had to wait a few minutes for the tour to start, so that gave us time to check out the store to see what we want to buy after the tour. :)

Again, no cameras were allowed during the tour, so here's a few pictures of the lobby.

Figurines were moving above us.

There’s a doll house just packed with stuff in the different rooms.

It was behind glass, but I just had to take pictures. It’s quite the dollhouse layout.

The tour was very good. The best part was the area where they pick the candy off the conveyor belt and put it in boxes.  Instead of people doing this task, there were two robot mechanisms that used a camera/GPS mechanism to "see" the candies and pluck them up and place them in each compartment of the box.  It was quite amazing!  And, the two robots were names "Lucy" and "Ethel," which you folks our age will recognize from the famous "I Love Lucy" episode when Lucy and Ethel worked in the candy factory.  They even had a photo still from that episode on the wall.  After the tour we just had to purchase some of their products.  (Hey, it was cheaper than buying a motorcycle!)

On the way home we passed some interesting looking duplex houses in downtown York.  This is a neat area, and we'll try to get more pictures as we're out and about this week. We were glad to get back to the rig after a full day of touring. It’s supposed to rain off and on tomorrow, but we hope to go on another tour.  They require reservations, so we'll call them in the morning and see if we can get in the same day.  We'll let you know tomorrow how that turns out.

Lucy and Ethel, love it!

I like the 3-wheeled Harley too. Even with 3 wheels on the ground I'd be terrified to ride it on the road!

Looks like two fun tours. Seems that most manufacturers no longer allow pictures.

I think Jim would have liked the motor cycle better than the candy! He looked good on that big one!!

That's exactly what I thought.

tell your other friends,that gguncle has been riding a trike for about 5 years, & he's 68 years young; also has a friend thats in his middle 80's still riding. they arn't perfect but safer than two wheels. dom

Enjoyed your post about the HarleyD-Davidson factory tour. There are several Harley's in Fayetteville, AR this week for the beginning of the annual Bikes, Blues and BBQ. Huge event and so much fun to walk down Dickson and see the beautiful bikes. Time to have fun and meet some of the nicest people who travel here from all over the USA...money goes to charity every year. Hope you can make this wonderful event sometime.

Ohhh Lucy and Ethel!
Someone is very clever!
How classic!

I hope you didn't stuff your faces and pockets like Lucy and Eithel did!
We saw an interesting bike on the road that had two wheels on the front and one on the back, Spyder by Can-Am.
Sounds like you had a good day! K

Two more things to add to my bucket list. That was my favorite episode of I Love Lucy.