(Goshen, IN) – Today's blog is brought to you by the Jim half of Jim & Dee.  As our regular readers know, our Norcold refrigerator quit on us.  Lost food, trips to get ice, etc., etc.  Well, we hitched up and were off at 9am this morning to have it checked out.  We went about 12 miles to Hobson's RV Service in Elkhart.

Notice Dee in the picture below, sitting in the "waiting room," which consisted of a chair under an awning.  (Double click on the photo to enlarge) 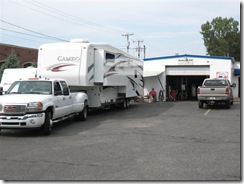 We were there for about three hours.  In that time Jerry (nice guy) diagnosed our problem.  Our cooling unit is completely shot.  What's more, he discovered that Carriage (the manufacturer of our RV) installed part of the fridge wrong on the assembly line.  They left out a baffle on the upper outside vent, where the hot air is vented to the outside.  The missing baffle caused the hot air to hang in the upper part of the refrigerator assembly, which eventually burned out the cooling unit.  So I guess you can see where this is going... who will pay to have it fixed?  Norcold or Carriage?  After many phone calls, discussions, a visit by a Norcold factory representative that happened to be in the area, and more phone calls, Norcold decided that they wouldn't honor their warranty because the unit wasn't installed to their specifications (missing vent baffle).  So it was up to me to negotiate with Carriage on what do to.

So we returned back to our site in Goshen, and for the rest of the day I talked on the phone with BOTH of our regional customer service managers, the warranty manager, and the service manager at the Carriage factory (which, by the way, is only about 10 miles from here).  It wasn't a matter of Carriage paying for it, they agreed to that right away.  The problem was, Hobson's doesn't work with "third party" arrangements.  In other words, if Norcold wasn't covering it (i.e. paying them), they wouldn't agree to wait for Carriage to pay (which would take about 60 days).  So by the end of the afternoon we decided that we would pay Hobson's to make the repairs and then Carriage would reimburse us.  Not the ideal situation, but one we can live with.  By this time it was 4pm and I had to call Hobson's back to see if they can fit us in before this weekend (they're closing for vacation next week... of course... just our luck).  Jeremy, Jerry's son, said his dad was out and he'd have to check with him to see if they can fit us in tomorrow.  (Keep in mind I called several other shops and couldn't find anyone who could take us within two weeks.)  Well, it was getting close to 5pm (closing time) and no call back.  We're on pins and needles now, because we knew that if we didn't get this done this week, we'd be without a refrigerator for at least two weeks (which would be in the middle of the Escapees Rally).  So I called Jeremy back just before 5pm and he said he still can't contact his dad.  He was even getting a little concerned.  He assured me he'd call me  back.  Finally about 5:20 he called back and said they would do our repairs tomorrow.  Hooray!  So tomorrow we have to take our rig back to Elkhart at 10am.  At least Dee can sleep a little later.  :)  Dee will follow me in her car this time so we can run around for the 4 to 5 hours they'll need to do the job.  We're thinking we might check out the Notre Dame campus, which is in nearby South Bend.  This will be the first time we've moved Tumbleweed on two consecutive days.  Not a big deal, but a bit of future trivia for us to look back on.

Later this afternoon Dee called Bob & Molly and arranged to retrieve some of our frozen meat from their motor home freezer for dinner.  By mid-afternoon it started raining off and on.  They really need the rain in this area.

The rest of the evening was spent in front of the TV.  We're keeping an eye on Hurricane Earl, which is coming toward the NC coast.  Dee's mom will be ok in Cary (near Raleigh), but my mom and two sisters are in Morehead City, which is right on the coast.  We're keeping our fingers crossed hoping Earl turns away.

Oh yeah, for those who left comments yesterday wondering if we'd be suckered into keeping that kitten?  Not gonna happen.  She's cute as a button and everything, but... really, no way.  :)

Doesn't it burn you up that you have to jump through such hoops to get something fixed that was never right in the first place!

Good move on not keeping that kitten. Kittens turn into cats.

Good to hear that you will be able to keep your cool a little better tomorrow.

Some things are really frustrating, aren't they?

Glad you got a resolution and will have a fixed frig soon!!

You really find out about these RV manufacturers once you have owned a rig with a warranty problem. In my mind, they should have invited you back to the factory and corrected their screw up on the spot! No questions asked, and no money out of your pocket. They ought to buy you a motel and meals, since you can't even cook. And if they back pedal paying up after the deal, legal people might be needed. Must just be the territory! Best of luck!

Glad to hear you have a resolution for the fridge problem, just hope you don't have to wait forever for the reimbursement, which will be steep. You would think with the factory so close they would have just had you come over and put a new fridge in,and fixed the baffle, that would have been better customer service. Oh well it will be good as new soon. Be safe out there. Sam & Donna.

Sounds like you have the refrig problem under control now - hope today goes well.

As with all hurricanes, I keep a very close watch on their path and development. They are predicting that the center of Earl will pass only about 50-75 miles from Cape Hatteras as a Category 3 storm. This is a HUGE storm so inland areas will be affected with strong winds and rain and storm surge.

Please take a moment to read this link so you can better identify the impact of where your famly lives:

Hopefully, your fridge will be fixed today without fail.