Refrigerator Fixed – Under the Golden Dome

(Goshen, IN) – We had a downpour this morning right at the time we were hitching up to move our home to Hobson RV to have our refrigerator repaired.  We’ve only had one other time that we had rain when hitching up, but not as bad as this morning.  I followed behind in my car because we wanted to do some sightseeing while the repairs were being done, and we didn’t want to unhitch and take the truck.  We got there at 10:00 and the two guys started right away to replace the cooling unit.

It wasn't a very good day for sightseeing - very gray and rainy - but we drove over to South Bend to see the campus of Notre Dame University.  I grew up in this area, but I don’t remember ever seeing Notre Dame.  It’s really gorgeous!  The buildings are all light colored bricks. 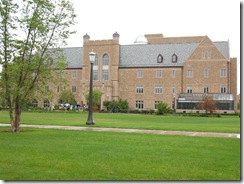 Most sports fans have heard of "Touchdown Jesus."  The mural faces the north end zone of the football stadium. 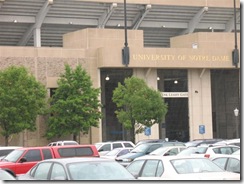 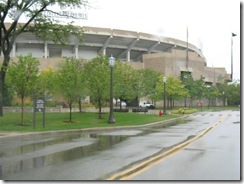 We went to a nearby mall for a couple hours to have lunch and waste some time.  We didn’t see a thing we needed so we didn’t spend any money.  It's interesting how your values change when you live in a 400 sq ft home.  All that "stuff" for sale in the mall, and we weren't interested in hardly any of it.

Hobson’s  called earlier then expected to say the job was finished, so we headed back.  Along with replacing the cooling unit...

... they had to also re-do the upper vent baffle so we don't go through this again.  They found out while making the repair that Carriage installed the baffle upside down some way, so instead of venting the air to the outside, all that hot air was circulating at the top of the vent.  We're surprised the fridge lasted 8 months!  We paid the bill, and as soon as we got back to our site Jim called Carriage to get instructions on how to proceed with our reimbursement.  It will take 60 days, but we're just glad to have it fixed.  We've been without it for 8 days.

It was still raining when we pulled out of  Hobson’s, but it started to clear up as we arrived back at the park. We got set up, talked to some new neighbors, then went out for dinner.  It's now early evening and the refrigerator is cooling down nicely.  It will take 24 to 48 hours to get totally cooled down.  These RV refrigerators aren't nearly as efficient as residential units.


We’re keeping an eye on hurricane Earl NC.  Jim talked to his mom last night.  She's not expecting any major problems where she lives in Morehead City.  It won't be a direct hit, thank goodness.  I hope everyone along the East coast takes cover and stays safe.  We’re from Raleigh, NC and we went through a direct hit from Hurricane Fran in 1996.  So we know direct hits are not fun.

I'm so glad to hear that you got your refrigerator fixed! Hope it's done right this time!

Nice pics of the South Bend area and the university.

Hope the family stays safe if Earl hits their area.

Just hoping to live in 400 square feet makes me very cautious in shopping. Everything I look at is something I would have to get rid of someday!

I have seen several things I might like in an RV someday. I've been clipping pictures and put them into an envelope for future consideration, or bookmarking their web pages. Neither of these costs anything and I don't have to store anything!

I've heard of The Touchdown Jesus.

What a relief it will be to have a cold fridge again!

I really sympathize with everyone along the coast, all the way up to Maine. Those hurricanes are hard to predict until they are on ya.

Great news about having the fridge fixed,and better yet you will be getting your money back just in time to go Christmas shopping. Hope your weather improves so you can put that fridge to good use collling beverages for happy hour. Be safe out there, we are thinking of you guys, mayb you can stop when you go to your sisters. Sam & Donna.

Glad the frig got fixed. It's one of those things you don't appreciate until you don't have it. Hopefully there will be no problem getting reimbursed.