(Goshen, IN) - Today was a rare day when we would get to spend time with both of our sons and all of our grandsons.  Our son Frank drove up yesterday from O'Fallon, IL (just east of St. Louis), along with his friend Mike, to take Kyle and Kendall to their first KISS concert.  This was special because Jim took Frank and his brother Rick to their first KISS concert when they were boys.  They're both still big KISS fans to this day.  They've been to see them several times, including once when my sister Doris took them (and Mike) in her van and they broke down after the show.  When Frank found out KISS was playing in Chicago, he just had to bring the boys and enlist them into the "KISS Army."

We had planned to arrive at Rick's in Homewood, IL (near Chicago) by 9:00am this morning,  then all of us go out for breakfast.  We took off at 6:40am and had a smooth trip and got there about 8:45.  When we knocked on the door, Rick let us in and everyone except him was still in bed sleeping!  It was then that Rick informed us that it was 7:45am, not 8:45.  We totally forgot about the time change to central time!  Needless to say, we (and by "we" I mean "I") could have gotten an extra hour of sleep this morning.  On the positive side, we had an extra hour to visit with everyone.

We went to a local restaurant called Blueberry Hill for a great breakfast, and with four kids we were the loudest bunch in the place.  I had something different, a french toast bake.  It was huge and very dense.  It’s stacked toast with blueberries and cream cheese topping.  I only got half way through it and brought the rest home. 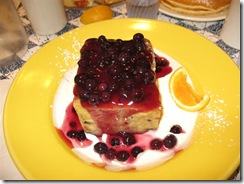 After breakfast we went back to Rick's house and had a wonderful visit.  The temperature was in the mid-60's and breezy.  We sat outside with light jackets on in the sunshine to stay warm.  Kyle and Kendall told us all about the concert and it was obvious they had a wonderful time.


As I mentioned above, Mike rode up with Frank from O'Fallon.  Mike has been a very close friend of our family since the boys were in high school in O’Fallon almost 20 years ago.  We’ve “adopted” him into our family, and it was great seeing him again.

Our two boys, Rick and Frank

Three generations of Walter boys, plus mom/grandma.  Rick, Frank, and Jim in the back; and Kyle, Kendall, Jack, and Dee in the front.

We had a marvelous time. It’s going to be next year before we see them again, but at least we’re not limited to “vacation” time.  We left around 3:15 for the 2-hour trip back to Goshen, had dinner and watched the NASCAR Nationwide race on TV.

What a wonderful day!! Thanks Rick for having us all together.

My youngest son and a couple of his friends used to attend the concert in make-up and wigs to look like their favorite KISS band members. I always thought it was hilarious they would go out on the street like that, but they said many fans came to the concerts the same way.

Sounds like you had a great day. The weather is changing here in NC too and I'm ready for it. I enjoyed reading about your visit with family.

What a great way to end your midwest tour, A day with family, Have safe travels as you work your way south, when you start seeing the Winn-Dixie trucks you know your in the south. Also once you get into Fla have a seven-eleven slurpee, root beer of possible for Sam..Be safe out there. Sam & Donna.