Rolling Thunder - If My Body Were a Car 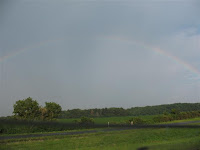 (Fair Oaks, IN) -  At 4:10am I was awakened by something strange but couldn't place what it was.  It sounded far away once I woke up enough to really listen. It sounded like drums but very continuous, then I realized it was thunder.  It just kept going.  I fell back asleep but at 5:30am it was on us and it was LOUD!  I turned on the weather radio and all it said was very heavy rains of up to 2" per hour. It rained hard for about 10 minutes but the thunder just kept going and the lightning didn't quit. I listened for another half hour then fell back to a light sleep and didn't get up until 10am.  There were puddles all over the place but we didn't see any damage or flooding in the park.

We have a 1998 Rav4 that just hit 90,000 miles on it, so we decided to get its oil and filter changed.  We had it serviced before we left in March, but we've put a lot of miles on it since then.  We took advantage of a $19.95 special at Car-X.  It's nice to have something like that done and not worry about sitting in the waiting room for an hour.  In our previous lives in the working world we hated wasting time in waiting rooms, but now we have all the time in the world.

When that was all done we made the first trip to Walmart for the month to stock up on groceries.  Then we were both hungry for pizza, so we stopped at Pizza Hut.  And of course we had to get the chocolate dessert. When we got home I quickly defrosted the freezer before putting the groceries away.  Now we're ready to leave on Monday with a fully stocked kitchen.

The picture above of the rainbow was taken on our way back home.  We ran into a line of rain but the sun was out.  It was almost a double rainbow but didn't quite make it.

We received an email from Escapees with our e-tickets and all the info for the Escapade in September. Everything is now in place to go.  It's September 12-17 and we're both very excited about meeting up with people and learning a lot at the seminars.  This will be our second big rally but the first with the RV.

I got this email today which I just had to share.  Thanks for sending it Dom.

If my body were a car, this is the time I would be thinking about trading it in for a newer model.

I've got bumps and dents and scratches in my finish and my paint job is getting a little dull ... But that's not the worst of it.

My headlights are out of focus and it's especially hard to see things up close.

My traction is not as graceful as it once was. I slip and slide and skid and bump into things even in the best of weather.

My whitewalls are stained with varicose veins.
It takes me hours to reach my maximum speed. My fuel rate burns inefficiently.

But here's the worst of it -- Almost every time I sneeze, cough or sputter - either my radiator leaks or my exhaust backfires!

Glad the storm didn't float you away! I can totally relate to "If My Body was a Car!" Know anyone who does Paint and Body work?

Hilarious and so true!

We hope to meet up with you @ the Escapade. We enjoy your blog and got a good laugh this morning reading "If My Body Were a Car".

Clever! Drop by Levonne's Pretty Pics and A Camp Host Housewife's Meanderings when you have a few minutes. I'd love to hear what you think of my newer work.