It was thundering part of the night and then the wind picked up.  We had just a few minutes of rain but nothing more.  I heard this morning there were tornadoes in the Midwest, so the storms went north of us.  We both woke up just before 3am with a thumping sound. It sounded like it was under the bed. Our first thought was one of doors was open and it was banging in the wind.  Neither of us got up, but it continued till after sunrise.  When I got up I went out to see if I could find it, but never did figure it out.  Just one of those things that has no answer.

Jim was supposed to go to our Son's today to help him move into his new house.  But he smashed his finger yesterday when the basement storage door slammed on it.  It's pretty ugly looking! 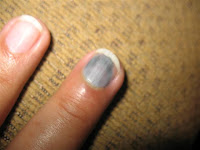 He was in pain all last night, and this morning couldn't grip anything, so he called Frank to tell him we can't make it.  Frank said he has plenty of help so Jim doesn't feel so bad about not going.  He did some internet research on smashed fingers and was thinking of lancing it himself.  Believe it or not he learned that the easiest way to do that is to straighten out a paper clip, heat it until it's red hot, then slowly push it through the nail.  Oh my!  He decided to ice it down a couple of times today and we'll see how it does for a few days.  The nail will probably eventually come off.

I went over to my sister's for awhile.  We walked the dogs, but they didn't want to go too far today.  When they get tired they just lay down.  Two have bad legs so they quit real quick when they've had enough. It was hot today but no humidity... one of those perfect days when you just can't stay inside.

Six months ago today I retired from work.  It seems so long ago, but I sure haven't missed it. I think of the co-workers and I email them from time to time, but I sure don't miss going in everyday.

Our hostess Judy got tickets to go the St. Louis Cardinals game today to take her dog to a "pooch parade." Fan dress up their dogs in Cardinal outfits and show them off.  Here's a couple pictures of Basil all dressed up for the game. 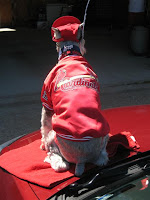 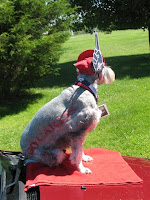 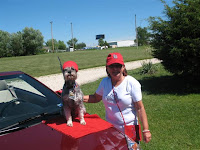 I hope they had a good time, but they're not back yet from the game to find out.

The rest of the afternoon was watching the NASCAR race, reading blogs, then back to Doris's house to do the laundry.  We will be back to O'Fallon, IL (Scott AFB famcamp) for the next laundry day.  Thanks sis for the use of your machines.


Doris decided to start a pit fire since it was cooler and we both wanted outside.  While watching the fire we heard the coyotes in the distance.  Zoey heard them too and she just stood there. 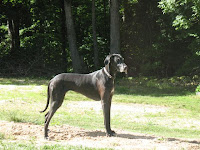 The fire to end the evening. 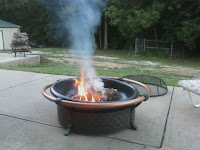 Tomorrow is my birthday, we're going to be gone the whole day and end it with my yearly lobster dinner that has become a tradition.  We started that at least 15 years ago.

Hahahaha!! Your pictures of Basil cracked me up!! Did Basil know you were taking a picture of his backside ;) SO FUNNY!!

I just happened upon your blog and love reading all your great posts. My DH and I are heading out in 20 days!! I'm trying to learn as much as I can from people out there living the dream.

(feel free to become a follower of my blog and post comments whenever you want!)

I usually tape up a smashed finger with some adhesive tape. Kind of makes it feel better, and it keeps it from getting bumped and sending me to the moon in pain.

I got a black thumb from two crescent wrenches on a LP line and my thumb in the middle. And yes I will probably loose the nail as well.

Hang in there it will get better!

Happy Birthday Dee! And congratulations on your 6th months of retirement. Where did the time go? It seems like yesterday you were in the finally few days of the countdown!

Happy Birthday! Six months of retirement. I know some people actually get bored but I don't see that happening with the two of you. Travel safely.

Have a very happy birthday, Dee. And congratulations on becoming "old-timer full-timers" so quickly!

Six Months sure did go by fast didn't it! So many changes and a new life.

Happy Birthday Dee, I am still on vacation and don't start actual retirement until July 1st.

EWWWW I just FLINCH inside when I saw the pic of Jim's nail... owie!

I am catching up on blogs here from being gone all weekend with a limited aircard signal. That happens when ya go up in the woods.

Loved the dog walking pics too.

Hope you had a great birthday!!!!