We woke to thunder and rain pattering on the roof.  It was cloudy and DARK!  The first thing we checked was to get online and get the TV on and see if it was severe weather  or just a storm passing through.  It wasn't anything severe and it wasn't suppose to last the whole day.   The temperature was in the 70's but the rain and lightning lasted till noon.

We were scheduled to move to another site within the park today.  With all the rain we were thinking of delaying the move until tomorrow.  No one has our current site reserved, so it would be ok to wait until tomorrow.  So we  sat back and relaxed with the blogs, TV and watching people come and go out of the park.  During the rain two rigs left and one moved in beside us.

After lunch the rain was gone and it was starting to get sunny and the humidity was climbing.  The weather for the next seven days is going to be mid-90's with high humidity.  Jim says we're moving.  It took 15 min to get the slides in, the satellite dish moved and the hoses unhooked.  Then it was time to line up the truck for hitching, which is my job.  I had trouble lining it up this time.  I have my good days and my bad days.  Once I finally got backed up correctly and we got hitched Jim took Tumbleweed to dump the tanks.  We have another 18 days before we leave, so we'll dump again at the 9th or 10th day.

We're now in our last site for Scott AFB.  We're all settled in.  Part of the full time lifestyle is learning to cope with "tank management."  For those of you who are not RV'ers, all RV's have 3 types of tanks:  a fresh water tank for your (obviously) fresh water, a "gray" tank to collect water from the sinks and shower, and a "black" tank to collect everything from the toilet.  Managing odors is something you have to get used to, especially in this hot weather.  When we first moved in I ordered Happy Camper Tank Treatment.  It's been great and you can get your money back if you don't like it. We've been putting it in the black tank, and we've never had an odor problem.  However, the last couple of days we've had an odor from the gray tank.  After today's dump and back flush, we're going to add the tank treatment to the gray tank and see if that does the trick.  Our neighbor said he's had the same problem and gave us the name of a liquid he buys for his tanks.  We may give it a try, and we'll report on it if we do.  But enough on that subject...

Here's the layout of our famcamp, courtesy of Google Maps. If you click on the picture you can see the site numbers in blue.  We've been in five sites in our two months here. 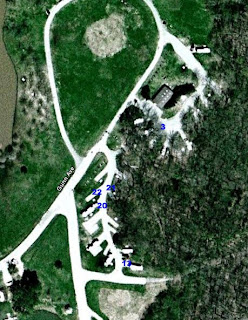 It was really humid today and will be worse tomorrow, so we're glad we moved.  Now we have NO trees, which is fine with us. Ticks are very bad and the trees drop stuff all over the RV.  We're finding out we're not the "woodsy" types.  Now we'll be more in the heat, but we're hoping that won't matter.  We're now on 50 amp service and can run both A/C's.

We had dinner with our son then went to watch our youngest grandson, Kendall, at his basketball camp. 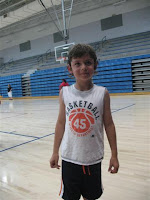 Here he is making a basket. 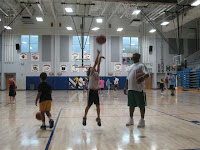 They practiced for an hour and half.  He was one tired boy afterward.  We of course had to get ice cream on the way home.  Remember I said I had lost 12 pounds since I quit work on December 6th?  Well, guess what, I have gained eight of it back.  I don't think it's the ice cream and beer, though...  Is it?

Be sure your tank treatment doesn't have formaldehyde in it. They don't allow it up here.

Too bad about the weight gain. Ice cream is bad and beer is probably worse!

They state that you can use the Happy Camper in the wash for hunting clothes, so I expect it has the same ingredients as Calgon Water Softener. That's all a lot of RVers use.
I hope you like your new site, with no shade!!
Happy Trails, Penny, TX

Nahhh. Not beer and ice cream. Can't be.