Last night we were watching the storms from the West and had a projected time of 9:14pm for a line that had tornadoes to enter our area.  We had just watched the Nationwide race and I was on chat when the base security police came to the door and said we had to evacuate.  The alarms were going off on base and it was just starting to rain. He told us about a building to go to which we tried to find but in the dark and rain we couldn't find it.  It was about three miles away.  We  called our son and said we were on the way over.  It started lightning and pouring rain as we made our eight mile trip to his place.  We have never seen so much lightning.  It's good they have those reflectors on the road, it's the only thing to see in that hard of rain.  We got to our son's and stayed till the storm passed.  I hope never to do that again.

When we got back home about 11:00 all was fine.  We are under trees for the first time and the drops of water from the trees sounded like little explosions on the roof.  Then there were footsteps that broke sticks in the woods early this morning.  I didn't get up to see what was going on and no one tried to get in, so I went back to sleep.  (Of course Jim slept through the whole thing.)  At 4:45am a bird decided it was time to wake up the world.  Needless to say, it was a lousy night with very little sleep.

Since we're in woods and there's so many animals and birds around I checked the Scott Lake information brochure we were given.  It has a long list of animals and birds that can be seen in this area. Click on the picture to make larger. 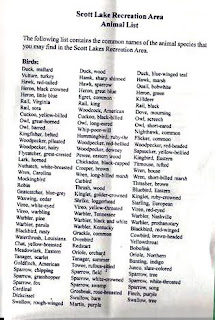 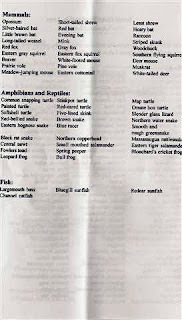 We didn't do much all morning.  We found the building we are suppose to go to if we have another round of storms. We went to our son's birthday party in the afternoon and had a great time.

Our grandson Kendall playing with Banjo, and Banjo guarding his plastic water bottle. 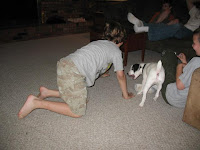 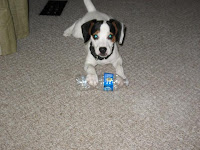 This is Jim and Jimmy (Frank's father-in-law and brother-in-law). 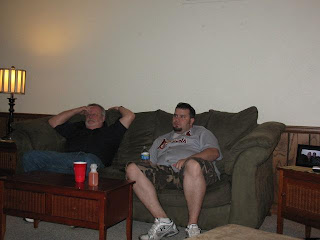 Frank, with friends Kim and Lawrence, all resting after a great meal. 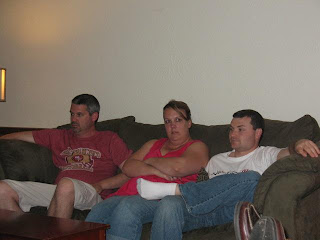 We watched the Kentucky Derby at the party, then came home to watch the NASCAR race. We're supposed to get storms again tonight, but hopefully not as severe as last night. Maybe we can get a good night's sleep tonight.

Glad you made it through the storm safe and sound. Hope tonight is a quiet restful night. Stay safe.

Glad to see you guys weathered the storms, we had some rain, but no really heavy stuff on the MO side.
Scott is in a very bad location for heavy weather which seems to hit along the IL side of the river all up and down the St Louis area.Be safe out there looking forward to seeing you guys. Sam & Donna.

Sherri and I were at the race track yesterday. The crowd there was unbelievable...some to watch the local race and then some to watch the Derby. We got out of there before we were trampled. We know all about those storms. We have had to ride out several in the RV with no place to go.