It was a very early start today. I was actually awake about 6:30am to get today started.  We were meeting with two other RV'ing couples in Hannibal, MO.  My sister Doris came over at 8:00 to join us and we left for the Mark Twain Cave complex about an hour away just outside Hannibal.  We got there a little early so checked out the gift shops.  There's two caves next to each other, the Mark Twain Cave and the Cameron Cave.  The campground is in the same area, which was almost empty.  We easily found Marlyn and Ed's beautiful Mobile Suites fifth wheel and were welcomed with hugs all around.  Before long Cindy and Ken arrived from Quincy, IL, about 20 miles away.

From L to R Cindy, Ken, Ed and Jim 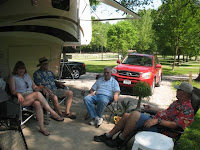 We had a wonderful time talking on the patio until lunch time.  Ed led the way to a wonderful restaurant in downtown Hannibal called Lula Bell's, which used to be a bordello years ago.  After lunch we made a stop at Lover's Leap.  It's on a high bluff overlooking Hannibal and the Mississippi River.

From L to R Jim, Dee, Doris, Cindy and Ken

Ed workamps at the park as a tour guide.  He offered to give us a private tour of the Mark Twain Cave.  I'm not keen on close quarters.  Over the years I've become more claustrophobic, so wasn't sure if I could handle the walls real close.  I decided to go and Marlyn loaned us jackets and sweatshirts, and even had shoes that fit me since I was in sandals, which weren't very comfortable for the walking we would be doing.  The cave is a constant 52 degrees.  It's where Mark Twain and his friends played as kids in the 1800's.  Mark Twain based his book "The Adventures of Tom Sawyer" on his own boyhood activities, and the cave plays a prominent role in the book.  Ed was fabulous as a tour guide.  We learned so much from him since he's also a history buff.  Jim is a big Mark Twain fan and he really enjoyed the tour and the whole Mark Twain "experience" in Hannibal.

Here's a few photos of the cave tour.

I watch too many movies about walls coming down and walls coming in.  I'm actually looking at all the names on the ceiling that visitors have written over the years.  Jesse James was one of the famous people who wrote their names on the wall.  Doris is beside me.

I have so many more pictures, but I'll put them in an album for viewing later. What a great time we had. We did some more talking after the tour and left about 4:00 to head back to Troy.   We ate dinner then just relaxed the rest of the evening.  The RV stayed cool today and we're loving the freedom of doing things on the spur of the moment.

I'm still leery of caves, but this was a great experience for me.  I'm so glad I didn't back out.  Will I do it again?  Probably.  Let's just hope there's no earthquakes while we're underground.  :)

For more information about our day please check out Ed and Marilyn's blog The Happy Wanderers and also Ken and Cindy's blog The Frerx Adventures.

I don't think I've ever heard of cave walls "caving in" in developed caves that are open to the public. Just stay out of coal mines and you're probably ok.

I have followed Ed & Marilyn's blog for several years...they are such nice people. I am so glad you got to meet them.
I would love to tour the Mark Twain Cave because of the history but I do understand how it could make you feel. Glad you went!!
Continue to have lots of fun!!

Like you Sherri and I are not that into caves. Sounds like a wonderful time you are having.

Hannibal is a great place, we used to camp up there when the boys were little,that all ended when the flood of 93 took out our favorite campground, don't know if they ever rebuilt or not. You guys have fun, see you later. Sam & Donna.

We LOVE caves and have been to several all over the world. Even went to one in Barbados. We went to one in South Dakota where a lady gave us a book of directions and sent us into the cave. As far as the walls caving in, if it's your day, it's your day. LOL