One Month on the Road - Getting Ready for Rally

We both slept very well all night, and with no wake up anthems we both slept til 9am. The first thing that came to mind was to go to the water to see what ships are in, but we're no longer at that park. It's funny how the mind works and adapts to different places. I love it.

We didn't have much to do today, so I thought I'd bring you up to date on our first month on the road as full timers.

We moved into the RV December 16. I figured the way you know you're full time is when you sleep and eat in the RV. We had an apartment for awhile and once the food was put in the RV, we considered ourselves full timers. We waited until Jim quit work, which was February 12. We were on the road March 6 to start our travels.

We are in our sixth park. The parks have varied from ho hum it's a place to stay, to what we consider awesome and don't want to leave. We've been alone with no one around, and parks with people that are outgoing and willing to talk and give advice. This lifestyle is better then I ever imagined. I knew we'd like it, but it's gone way beyond what we thought it would be. There will be bad times, but as everyone says the bad is still better than staying in one place and working behind a desk.

Jim flushed out the black tank and it doesn't appear to be leaking, so it looks like our leak is in the area of the city water intake. We'll be at the dealer April 15, so we'll tell them to start with the fresh water system and see what they find.

Is there anything we'd change with the RV? NO.

Is there anything we'd do differently in getting ready? NO.

We're very glad to have the extra vehicle. There are so many reasons to have it and we've met several other people that do the same thing.

We went to Wal-Mart to get some groceries for the rally and also some RV stuff. One was a long handled brush to reach the top of the RV to clean it. We're getting ready for the 2010 RV-Dreams rally tomorrow. We're so excited to meet the new people that are thinking of going on the road full time and seeing the people we met in 2008 at the RV-Dreams rally in Branson, MO. If you're interested in the 2008 rally, check June 11, 2008 from my blog archives. I remember not getting much sleep and learning so much from everyone. I was nervous, and excited about all those people that didn't work... they all seemed to be so relaxed! There were several that had been full time for a long time and I wanted to be a part of it. We had planned to go full time in 2012, until we attended the rally. Now, here we are on the road two years ahead of our original plans. Thanks to Linda & Howard and the rally of 2008.

I made business cards to pass out this afternoon. Several people gave us cards at the last couple of parks and we gave out some, so I needed to replenish the supply. It's great to put on the back where you met the person and something that you'll remember about them. It's come in handy several times.

I took one picture today of the pet playground that's here in our park. It's really neat, with playthings for the dogs. 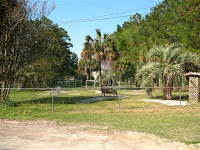 Many rigs came in this afternoon and the park is almost full. We're on the move in the morning to Willow Tree Campground in Longs, SC.

It is so funny that you mention the moving and not knowing where you are the next day. Sherri and I do that all the time. It does not get any better until you stay in one place for a month at a time.

Nanette and I always chuckle a little when we read your blog.

You were the first full-timer that we really got to know online.

We are so happy for you and Jim.

You are truly enjoying life -- and it shows!!!

I have kept up with you for several months now. I am so encouraged that you love what you are doing. I guess one of my "fears" is that once we are on the road we will not like it. I'm sure that does happen.

Wish I could come to the rally and meet everyone.

So glad it is everything you had imagined Dee. Can't wait to meet up with you and Jim. Have fun at the Rally and travel safe

You've really come a long way and I'm so glad it's working out even better than you expected. You've done great!

Donna & I too have been following you since you were getting ready for your new lifestyle, we are on the downhill side, with the house for sale and trying to figure out how to get rid of life's stuff, Sam will be getting rid of a ton of model trains and magazines, he said he will keep one complete train and his radio controller so if he comes across a club he can visit and maybe run it there for an evening. There sure is a list of stuff that has to go, Tolls, compressors,jacks,all kinds of stuff,We will have to have a heck of a garage sale and whatever doesn't sell will have to go to some church group to try to sell at their garage sales.You guys have been a source of a lot of helpful idea's. Se you later. Sam & Donna.

Yup.. been following you since you greeted me in the RVDreams chat. Such a Hostess!

It's been so exciting to watch you both take this all, step by step, into a successful full time adventure!