He is Risen. Many no longer believe in God, but I sure do. I couldn't have made it this far in life without relying on Him. To each their own in beliefs.

We waited for Reveille before getting up, which is 8am. I had almost all the inside ready to go. We figured being Easter there wouldn't be anything open, so after a good breakfast in, we were out of the park in 31 minutes. It looks like we have it figured out with the hitching, it only took one try. I'm so glad we took that RV class. The traffic wasn't real bad at the beginning of the day, but around 11am it was getting worse. I-95 is always risky to take, but it's the fastest and most direct way to the park we were headed for. We stayed in the far right lane and let everyone pass us. We stopped at the SC Welcome Center/Rest Stop and it was packed. Jim found a place to park near the grass and I found one on the other side of the building with cars, but waited in line to get a spot. It was nuts!

We pulled into the New Green Acres RV Park at 1:45 but had to wait for someone to open the office at 2pm. There was a lady doing laundry so we talked to her until the office opened. She's been here for the winter months and loves it. Two other rigs came in behind us.

We got our site near the back of the park, which is nice because it's away from I-95 traffic noise. We can't hear a thing. We have a Canadian family next door to us. They have a Carriage Cameo like us, so we hope to meet them while we're here. The park is less than half full. There's trees but enough openings to get satellite. It's a really nice park. We'll be here two nights. I think we'll be doing some sightseeing tomorrow. The temperature was 85 so we turned on the AC. The people aren't as outgoing as the last park.

This is near the office. The lilacs over the trellis were very pretty. There were lots of bees around, but it sure did smell good. 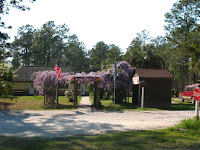 A few views of the park. ALL sites are pull throughs. 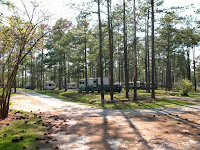 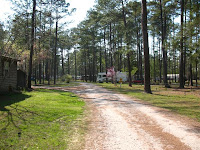 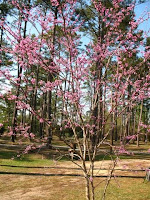 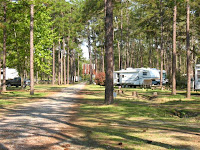 The clubhouse and shower area. 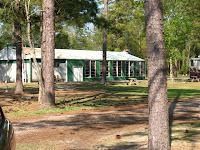 Our setup. My car is behind our home. 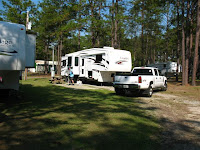 It's a great stop off point before going to the rally. We'll leave Tuesday morning.

RV parks that are all pull thrus are wonderful, not as private but sure easier to get in and out of!

Dee, I think the "lilacs" on the trellis are actually wisteria vines.
Hugs, JoAnn

I knew you two would have a blast living this lifestyle!!! Sherri and I are about to leave for Pineville La. We will be there for three days and then up to Sherman.

Now a persistent dilemma: trees or satellite. And sometimes you get both. - Gary

Hey guys....we are staying the night in Lexington GA at the Barnyard rv park. Hope ours is as nice as yours..travel safe and see ya soon!

Anxious to hear all your rally news as it unfolds!