We heard an extra anthem this morning for the reveille. They played the German anthem along with ours. There's a German Navy ship still in port. Nothing moved today from the Navy base, but several went out from the Jacksonville port.
The Coast Guard was around quite a bit, so I had to add this to the collection of vessels.

We got a LOT done today. The pressure pro had to be put on the inside rear tires of the truck. I have to attach the ones on the rear wheels of our dually because I have smaller fingers. I tried one other time but it was 20 degrees and my fingers froze before I could get them on. Then of course with the moves we forgot all about them. I got them on within minutes this time. I washed the other side of the RV since I ran out of time a few days ago and got the black mark off the front with the help of a neighbor's long handled brush. We have to get one of those.

Jim worked on air pressure on all the tires and all were ok but one. We had a very slow leak at the valve stem but he has the tool needed to tighten it, so it's now hopefully fixed.

Jim washed his truck and dumped all the tanks and cleaned up the sewer hoses. I got a few groceries and made a chicken dish for the rally. I could have done it when we get there, but I know I'll be meeting and talking and playing games so there may not be time. We're both so excited about getting to the RV-Dreams rally.

We have neighbors that are planning on going the RVatSea cruise in November. They said we can put the RV at the famcamp at MacDill AFB in Tampa and drive down to Miami. We're going to check into that idea. I'll have more on that subject when we get done with the rally.

We got a lot done today and we're hoping to have everything ready in the morning and pull out by 9:00. The travel is only three and half hours so we're in no real big hurry.

Here's the last of the pictures from the Mayport, Fla Naval Station. We've met several couples and we'll be back.

I took a couple pictures last night at sunset. It's so pretty. 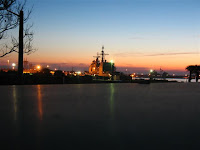 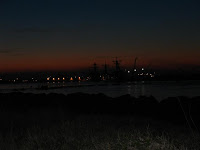 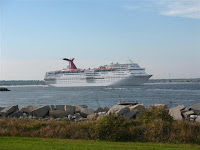 We've enjoyed our stay at this base. Follow along while we go to our next destination.

Pictures are great Dee.. So glad you have enjoyed your stay. Thanks for sharing the park with us.
Yes, MacDill does have a very large area that they have rv's stored. I bet you can do that.
Have a ball at the rally and give hugs to H&L for us..

I love the German national anthem, next to our own of course. It is a beautiful piece of music.

I have absolutely no desire to get on a raft, boat, canoe, or cruise ship or anything that floats, but I loved watching the big container ships going up and down the Savannah River.

I don't think Sherri and I will be getting on any ships here soon. No matter what you do we hope you have fun doing it. Wish we could go to the rally this year. We will follow your journal so we can enjoy the fun from a far.