HAPPY BIRTHDAY, FRANK   We hope you had a great day!  Thanks for taking us to the baseball game!

I've had trouble the last two days with Yahoo email.  I finally got a Yahoo agent on "live chat" and was told you have to have some sort of address to be contacted if something is needed from them, or if something illegal has been found and they need to notify you.  I took out all of my profile so they suspended my account.  It's all now back to normal, so for those who have been trying to email me, it's fixed and I'm able to get emails.  A lesson learned.

We went to get a few things this morning like stamps; found out they went up a couple more cents since I bought them last.  We also stopped at Walmart, then back home till we went to our son's to take off for the Cardinals baseball game in St. Louis.  On the way out this is the view from the road around the base.  The flight path goes over the road that we take to the base gate. 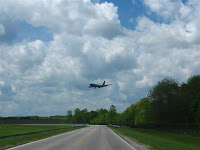 The baseball game tonight wasn't just a game, it was special.  Both grandkids were part of a school group that got to sing the song "Take me out to the ballgame" during the seventh inning stretch.  I'm not fond of baseball, but this was a special deal and the night was great.  We were on the top row on the third base side of the field.  The wind was blowing, which made it feel colder then it was.  We moved down to the lower level after the kids sang.  The Cardinals beat the Atlanta Braves 6-0. 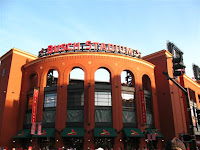 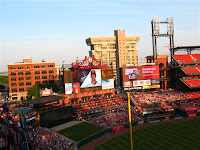 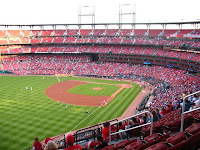 The kids were on the big video screen while they sang 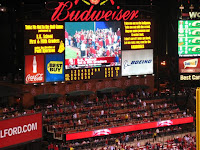 Frank to the left at the food stand and Kyle and Kendall waving their arms at us from below.

Some other views from the stadium of downtown St. Louis

The moon came up behind one of the buildings, it was really full and pretty

After the kids sang we went down to the first section and watched from another angle. It was getting late and the kids have to go to school, so we left before the last inning.

We found the kids after they sang. 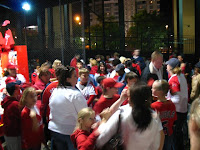 This is the crowds while the game was going on.  There were almost as many people roaming around as sitting in the stands.  I think going to the ballpark is just an excuse to gather and socialize. 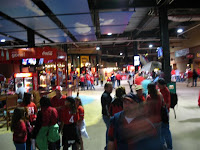 We got back home close to 11:00pm. It was great day with our family.

What a special moment for them and you two. I am so glad you were there to share in that. The pictures are great. Have fun

Know what you mean about $100 dollar ball games, Donna and I gave it up after it reached that level a couple years ago, Sad because a night out at the ball game was good entertainment years ago when the boys were growing up and you could afford ten dollar bleachers seats and 1 dollars drinks. Now the parking alone is ten bucks. I guess most Pro ball is like that though or they wouldn't be fighting over where to take there franchises next. At least you got a night out in St Louis and took some great pictures,Be safe out there. Sam & Donna.

How neat to be there for this special evening..
We love baseball and have been to a Cardinals game when visiting there.

Ouch on the costs to bring a famiy to a ball game. Even higher for football!

Glad you got to see the grandkids for this special event. I think all grandparents should get in free if they have kids doing something special, right? LOL