Somethings Wrong - I Drove - In Georgia 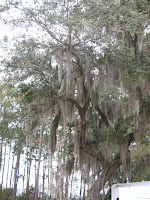 We were up at 7:30 and I actually slept better. I usually have a pounding headache but this morning that wasn't true, does that mean I'm actually getting use to the moves? It still took some time to get hooked up. We're both looking forward to the RV class to learn the little things and quick hook ups. We may need to do it sometime, during storms, or floods in parks.

Here's the conversation on the ham radio:

Jim: I have a problem with the truck, it won't go more than 40 mph.

Me: I'll put on the flashers so people will know we're slow moving.

Jim: We'll go back to the park, drop off the rig and find a truck place if we can.

Me: Do you have the overdrive off?

We drive to the next exit (only a mile or so), at 40mph, the minimum on I95 is 45, so we were really slow. We turned off the exit and back on the road to go back to the park. About half way there...

Ahhh, so I had it right, just wrong word. It didn't hit him when I said overdrive that it was the low gear (4WD) which he uses to hookup to the RV. Ok, so we went to the park exit and back to I95 South. Whew, that was a quick fix.

An hour later we stopped at a rest stop. Jim asked if I wanted to drive. Yep, it's time to try it. I haven't been behind the wheel yet with the rig. It's a straight shot and we weren't stopping for another hour or more. I did well, but sure is bumpy. Jim's behind me and sees the view I have, the white back end of the rig. Nice change. I later pulled over at an exit and he took over.

We both wanted to eat at Cracker Barrel. We found one and I went ahead to be sure it had an RV pull through. When I got off the exit I couldn't find the restaurant. I drove down a country road, Jim following me, to find someplace that he could turn around with the rig. I finally saw a church lot off the road a bit and he turned in there to get turned around. Not easy, but he made it. After we go back on I95 we spotted the restaurant off to the right, which wasn't seen from the exit road. So, we went an hour further and found another one. That one had a bus/RV space and he did well maneuvering through the parking lot and back to I95.

We pulled into Inland Harbour RV Park at 2:30. Nice park in Darien, GA. So far we have found the neatest little parks. I bet they're busy in the summer, but for now it's perfect. We'll be here till Sunday morning. Tomorrow we're going sightseeing.

Here's pictures of the park: 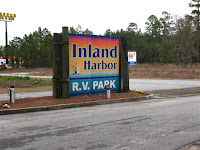 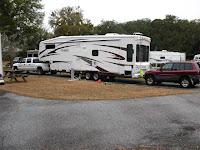 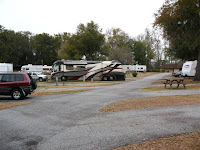 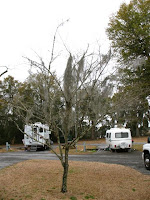 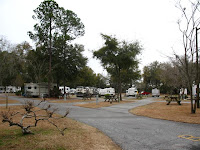 Our full setup we take up every inch. 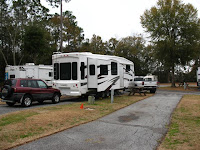 I'm not use to mossy trees and they fascinate me so excuse me if I have several trees. 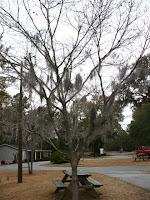 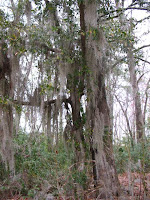 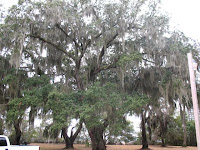 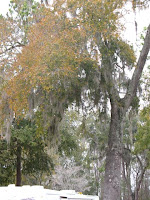 We like this park. Nice bathhouse, laundry, asphalt pads, picnic table, full hook ups, and great wi-fi. We also have free cable, so we're not setting up the satellite dish for the two nights we'll be here.

Looks like rain, it's 62 degrees and we're loving it. We're finally warming up enough we aren't using heat at night. Trees are budding now if we can get some sun. This is great!

Congratulations to you both, and especially to you, Dee. Now you're "broken in". Not all roads are as bumpy as I-95, and some are worse!

Do you have "The Next Exit" book, that tells you what is at every interstate exit? If you don't let me know and maybe we can work it out that I could send you mine. I obviously can't look at it while I'm driving, and you can't look while you're following in the car, but someday you may be able to get some good out of it. I've never referred to it even once.

I also was fascinated by the moss on the trees. Isn't it beautiful? Photographs just can't capture the beauty, I don't think.

Jim is gonna get that back view from the car, cuz Dee is taking over the big rig!

Way to go, Dee! Glad you guys are getting the hang of it.

But why do you use 4 WD for hookup? Are you on slippery grass?

Sandra, I use 4WD when I hook up because it allows me to "creep" the truck back much slower and steadier than in 2WD. In 2WD I would tend to push the accelerator and the truck would jump back, sometimes banging the hitch. In 4WD it's much easier to control. Jim

Have been following along for a few days now. Congrats Dee on driving the rig. I have only driven our Class A a couple of times. I only have one eye so no depth perception and the rig just seems so big. I plan on driving more this summer as we work/travel with the carnival.

I do have a question, why do you have both the truck to pull the 5vr and another car? Just a little curious.

Way to go Dee!! So proud of you on your inaugural drive!!

I second gypsy on the Next Exit book. Ken never wants to take an exit for gas or restaurant unless he knows 1) which direction must I go at the top of the ramp and 2) are we sure that the restaurant/store/gas station has room for a big rig. This book tells you both of these things and has made our travel days much less stressful.

You'll see it listed in my recent post on RV Adventure Planning 101.

Less than a month to the RV Dreams Rally! So anxious to finally get to meet you two!!

Congrats, Dee on your first tow! You are WOMAN, hear your ROAR! Although Dave will learn how one of these days, I absolutely love towing.

I second the comments on The Next Exit. It's very handy to have while traveling interstate highways.