By the time we get up, the men are doing PT (physical training) in the morning hours. 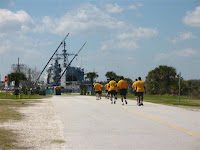 We decided to stay here awhile longer. The snowbirds are moving North and the parks have raised their prices, not a little, a lot. We figured we still have to wait on the registration papers for the RV and that may take awhile, so instead of moving twice we'll only move once before getting to the RV-Dreams rally. We're leaving here on April 4th. We're allowed 14 days, and our site hasn't been assigned to anyone else. We're so excited! This park has what we call the "IT" factor. We have everything we need here and the view is awesome.

I have too many pictures I just have to share, so this time there's less talk and more to show. (Double click on any photo to make it larger.)

Ships: There's not very many in port, but the destroyer USS Roosevelt had a celebration yesterday after being in dry dock since October 28. The Roosevelt is the 3rd photo below. We're trying to learn more about the Navy's fleet. We're Air Force so everything is so different to us. 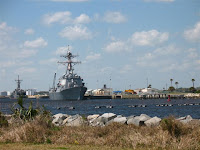 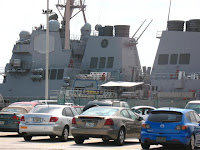 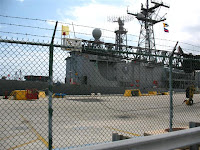 This boat was going up the channel toward the Jacksonville port, which is located behind the Naval Station, but then it was guided back out by the US Coast Guard. I wonder why. 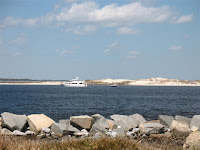 This is where the channel goes into the Navy port, where the gates are opened for ships going in and out. 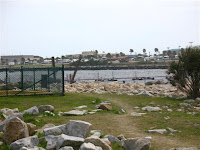 There's an airfield on base. I just happened to catch this helicopter coming in. 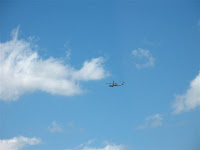 Today we had 25mph winds with gusts to 40mph. There was a high wind advisory all day.

The first picture below was taken yesterday, the second and third were taken today. Those are waves crashing on the rocks. It was hard to just stand up. The temperature was 66, but it felt a lot colder. 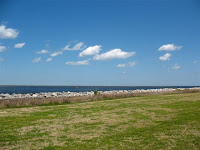 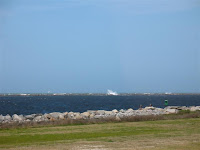 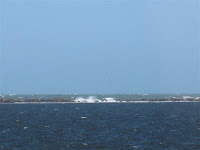 There was a craft sale all morning in the Roost (clubhouse). There were some really nice beaded items, quilts, leather necklaces and crochet items. It's the first time I've seen what people do on the road. 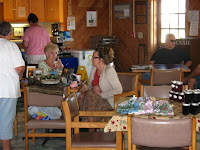 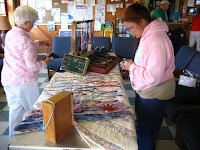 I loved the little girl quilt. The lady embroidered it. 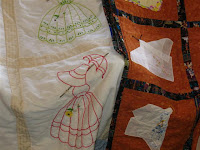 On the other side of the base is another RV Park. It's called the Osprey Cove. It's a separate park on base for stays of 30 days or more. We might consider staying there a month or so next winter. Here's a few pictures. Check out the weaving in and out of trees. I'm not sure we're advanced enough to park into one of those sites. It's across the street from a youth center and at the end of base housing. It also has a lot of trees. 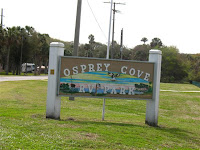 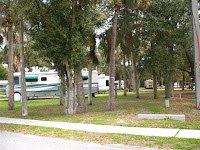 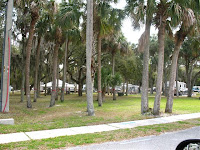 There's a small lake and canal near the RV park 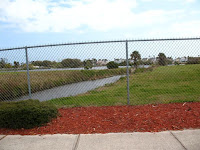 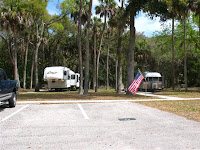 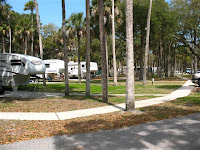 I'll have more pictures tomorrow of our park. It was so windy we decided to work on the computer and get some business cards done. They're not lining up once you print them on the cards, so Jim has been busy trying to figure out why.

Tonight will be the ice cream social. Yum!

When the ships are going by watch for dolphins jumping in front of them. They're so cute!

The picture of the war ship appears to be the USS Roosevelt. A guided Missile Destroyer. DDG 80

As I carefully reread your post I see you already knew the name of the Destroyer, I must have missed that reading it the first time. For a rather small ship it has massive power with its armament. There is quite a bit of information available if you google ddg 80.
I was in the Navy, and can spend hours reading about our ships at sea.

Looks like your settling into the life just fine!

I'm so glad for you. I started at the beginning of your blog, so I feel like I watched the transformation from workers to wanderers!

Re Crafts: Was anyone selling anything? Or should I say, was anyone buying!

Great photos... glad you are taking the time to snap some pics and enjoy your RVing adventures. Keep on sharing!

Merikay: I didn't see anyone "buying". Lots of lookers.

Winds of 25 mph with gusts up to 40? Welcome to Cedar Park, TX! That is what we have here just about nine months of the year. Just another reason we are rollin' soon! Enjoy, you two! Hope to catch up with you one of these days on the road.