I love the palm trees along the roadways in Florida. 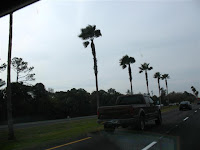 Another morning getting up before the sun, well maybe just after the sun but not by much. We wanted to be at the DMV by 9:00, after the rush hour and before the lunch crowd. This time we're trying to register the RV. We did it! There was only one person ahead of us, timing is everything. Now we wait for the bank to send a fax to the DMV and when that's accomplished we'll pay and get our registration. We made it out by 9:35 and made our way to St. Augustine.

We got a call a couple days ago from Glenn & Sylvia asking if we could meet up with them in St. Augustine while they're in the area. We met the couple two years ago in Raleigh when they came through that area. They were brand new full timers on the road, now a couple years later it was great meeting up with them again. We have chatted in the RV-Dreams chatroom for the past three years.

We called them from the DMV to say we were on the way. We made a couple calls along the way to tell them where we were and once parked we called again to see where they were located, we finally found them and made our way around the shops of downtown St. Augustine.

Glenn, Sylvia, Dee and Jim in front of an entrance to some shops. 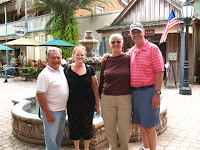 There's several unique shops and the eateries were plentiful to find something for lunch. 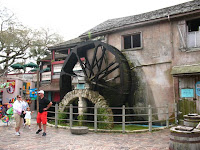 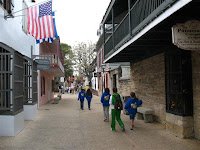 We went into the Basilica Catherdral. It's amazing 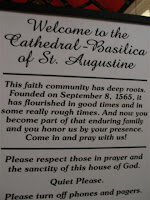 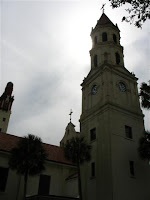 This is the back wall mural. 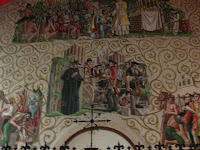 We also went to the Castillo deSan Marcos. It's similar to Fort Macon that we were to earlier this month in Atlantic Beach, NC. 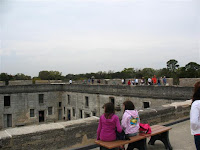 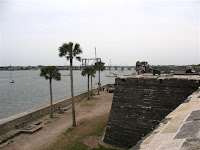 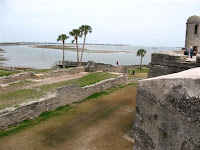 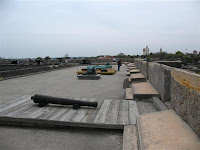 We were very tired by the time we left at 3:00. We wanted to get back through Jacksonville before 5:00 rush hour. It's very windy, cloudy and cool, but it was very nice day with some wonderful friends. Thank you Glenn & Sylvia for a great day in a wonderful old American city.

To answer a question from comments: Yes we made reservations. On this base you have to or you can't get in.