Update on Jim Another Week

It's hot here, but no where near Florida heat. It's really comfortable not as much humidity. I dread winter, but I'm not working and don't have to get out.

Just want everyone to know, this is a blog of info and maybe it will help others in things going on that you wouldn't think of. I also want to have things documented for future reads and questions of what happens.

The update from last Sunday with Jim. It's been a whirlwind and I can't put it into each day. It's all a blur. I thought I had the apartment but when I got the final application Jim wasn't on it. So I'm still working on that he has to have an application, which is $50 for EACH of us. There's law here in our county that you have to pay $10 to the city to cover emergencies and make sure there's only one person in a one bedroom and two in a two bedroom etc, (that's adults). It's put in a fund that goes to emergencies, like tornadoes and earthquakes or fire etc. It goes to help to the community in disasters. We're ready to move in on the 21st.

I'm going to rant a bit, most people that's dealt with the hospitals and rehabs already know it's a money racket. Jim is on tons of meds. I looked everyone of them up.  It's no wonder that people are over medicated. I hate our medical system. If they know they're going to get paid, they lay it on, needed or not. I know, I'm not a doctor, but I also know some of the meds are scary and mixing them?  I'm very upset.

The Barnes complex is enormous. There's schools for everything. The radiation area is in same building as Jim so they took him by wheelchair to get fitted for the radiation treatments. The crossbars is where the radiation will be aimed. That all starts after rehab on June 23. 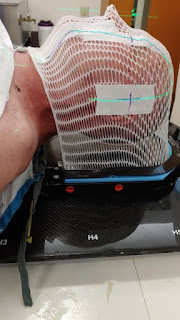 There was a few things happening during the week but nothing major, not really sure why they were keeping him so long in the hospital.  Trying to get info is like pulling teeth. As of today I finally got the final biopsy report of stage 4 Glioblastoma. They told us that from the beginning. We know what we're dealing with.
Monday was my birthday and Jim got me some gorgeous flowers and balloon, from the hospital gift shop. They were gorgeous. 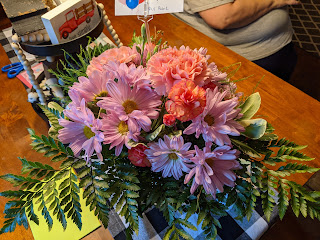 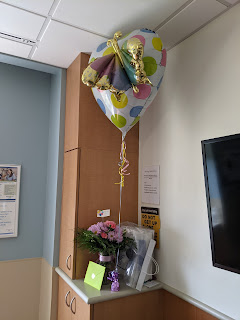 I must say the view out the window is great. That tall building in the background is Mental health clinic. 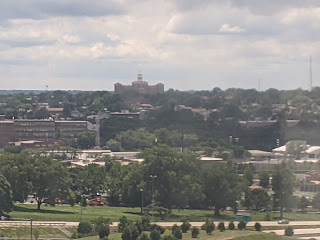 He was moved to rehab on Thursday, finally. Now I'm on a rant again. The hospital has everything possible on him from the time he arrived to the time he went to rehab, but you think they would communicate with the hospital. NO.  It took 3 hours asking me all the questions that were already in the system. I was tired and hungry and Jim was sleeping. I got back to Frank's (son) about 7:00. I'll never understand. It's been that way the rest of the week. All the meds and the reports are redone. He's doing OT (occupational therapy) PT (physical therapy) and Speech. It takes 3 hours a day. Another thing, he was given a covid test, and had to change rooms the next day and they gave him another one. What?  for overnight ?   Jim is doing speech therapy. 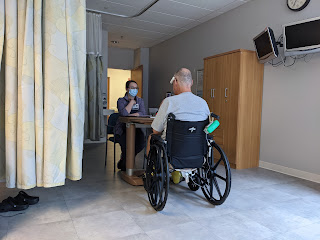 While I've been staying with son and wife, Frank plays the guitar and it's a joy hearing him . 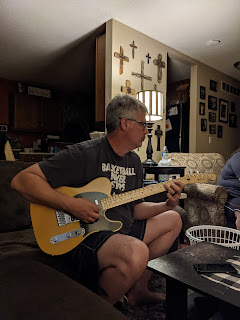 I got to see a game of volleyball that Kendall plays. They made it to the championship round. There's still a couple more games. He's going to Campbellsville college in Kentucky on a volleyball scholarship. 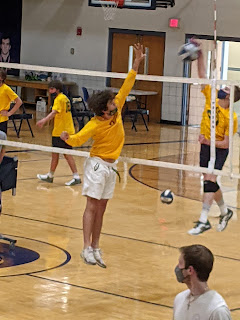 I'm leaving tomorrow, Sunday for Florida to get our "stuff". I'll be back next Saturday. It's going to be rough leaving Jim, but I really do want more clothes. He was really good in speaking to me today. If he's been resting and sleeping, he talks a lot better. Just can't talk fast then it turns to mumbling. We got a lot discussed about what to bring from Florida.
Today (Saturday) I went to our grandson's fiance bridal shower. Angie worked all week on getting things ready. We had tacos and it was so fun. Holly and Kyle are the two getting married July 10.
Holly with her sister Faith and looking on is a friend Hunter. 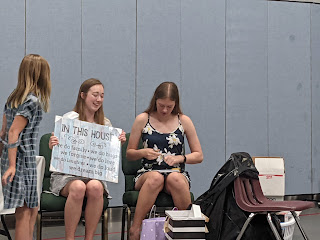 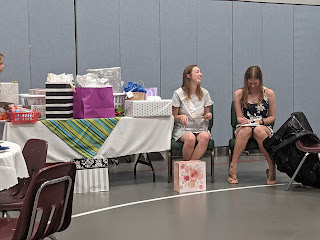 Holly and Kyle opening gifts at the house. 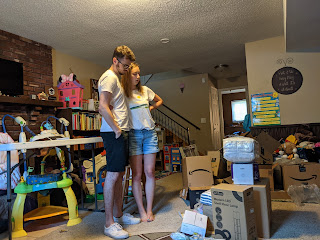 Cake and cupcakes for the party 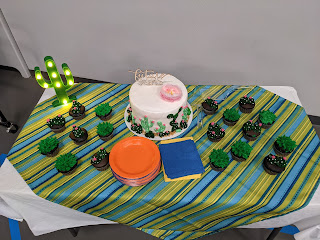 Tacos and all the trimmings for the party. 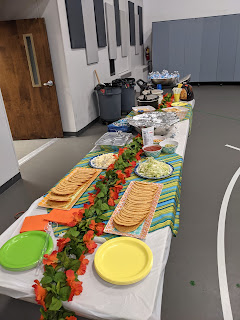 Pictures of the couple. 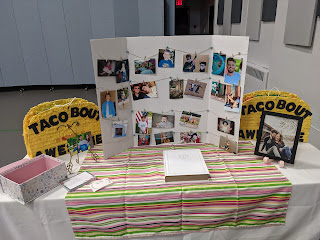 Jim was excellent when I got up to rehab. He had rested all day and was doing very well in speaking. It made it easier to leave him. I'm sure hoping the week goes fast and the movers get our stuff to us next Monday.

So much to have to do. My heart goes out to you. My Dad wore one of those 'helmets' when he was going through radiation. Prayers for you and Jim.

Hang in there girl. What a bomb to hit you but you are handling it well. I hope your sister can help at home. Liz Stanley

Thanks for the update...couldn't agree more about the medical system...but you are doing the best you can!!!! Don't forget to take care of you...so you can be there for Jim. Sometimes, you just have to back off and recoup🤗 We will keep both of you in our prayers!!!

Good to read that Jim can communicate better. It must be frustrated to him not to be able to speak as he is used to. And rant here all you want. We are listening and care.

Continuing to pray for the both of you!

Wow... hugs and kind thoughts and care and concern for you two. Cherish each and every minute with him. Wish there was something we could do from here to help. Love, Karen and Steve

Dee thank you for the updates.

Happy to hear he can communicate. So sorry you have to deal with our nightmarish healthcare system. We are thinking of you both.