THIS IS MORE OF A JOURNAL OF CANCER THEN FOR PLEASURE.  I'm telling details.

The beginning of the week was continuing with Occupational Therapy, Physical Therapy and Speech. I spent most mornings and early afternoons with Jim. The later it gets in the day the more tired he gets and he  sleeps. On Tuesday they started training me along with him on how to work with a walker, get in and out of the car, do steps and ramps. His mind tells him he can do anything, but the body doesn't always cooperate. I learned how to work with a strap around him in case he falls.

Monday: I picked up the keys to the new apartment. It's in a new development. It's so new the address seldom comes up to have things sent. The little patio. 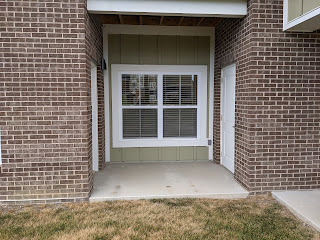 Over looking a couple lakes.  We have baby ducks learning from parents. 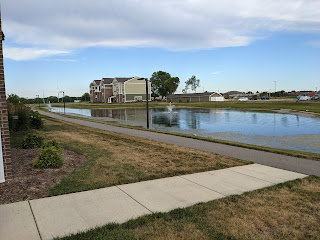 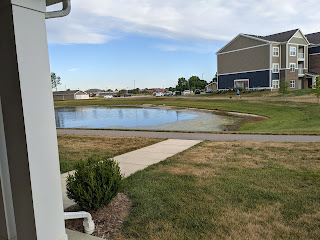 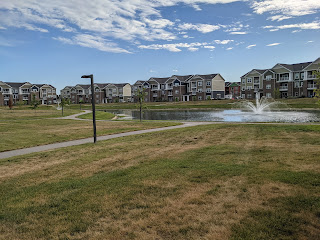 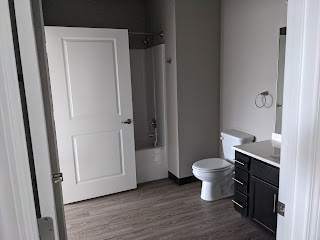 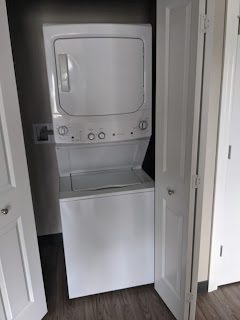 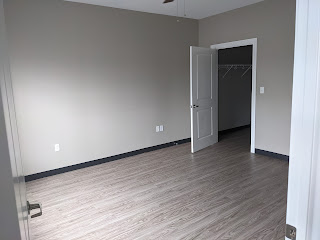 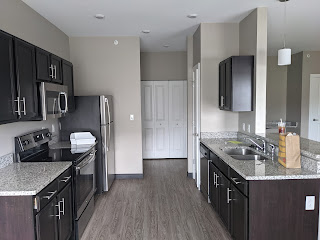 Interesting there's a closet in the dining area for wine? 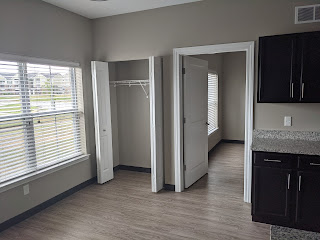 Wednesday was a wild day. Jim had PT, OT and speech in the morning and during that time we went by van from the rehab to the Siteman Cancer center a few blocks away for the first radiation treatment. We got back to rehab in time for lunch some more OT and testing stamina then back to the cancer center for first consultation with the oncologist doctor.  The rehab van forgot us so with some help from a therapist we tracked down the driver and was on our way half hour later. I guess they're used to that, because it wasn't long we were in for the visit. Now the pills and all the appointment will be for three weeks, then an MRI to see what happened to the tumor. If we continue or stop treatments at that time will depend on how Jim is doing and any changes. It was a long question and answer visit and I was given a detailed list of what to do and when with about 15 meds. My mind is spinning, but as they say do one day at a time. We made it back to rehab ok. The driver from rehab happened to be at Siteman and we rode back with him. We can't get over the immense amount of people at the Siteman Center, only for Cancer. Every 15 minutes someone is getting treatment from morning to night five days a week. After three weeks it's a new set of patients. The cars in and out of the place are in long rows.
Thursday was the same thing in the morning, back to the Siteman Center for radiation. It went smoother this time and we were back and lunch then the long wait to be released. They knew he was leaving a week ago but still took 3 hours to let us go. It was great leaving St Louis knowing we weren't going back for awhile.
He went to bed early and slept all night. I woke him at 8am to get the pills going before the third radiation treatment.  Our new Siteman Center here was excellent. It's just over a year old and very well laid out. The new Dr was great and wants Jim off the steroids'. We both really like him. We'll continue at the Shiloh office and also have blood work done.
ONE MONTH today, 6/25/21 was the day we came to our son's and ended up in ER. What a month it's been. 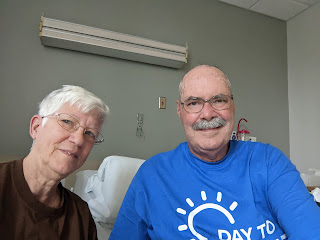 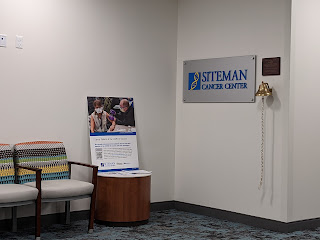 We went to the apartment to check it and show Jim where we'll live. He was pleased so that's good. The afternoon was resting. Tomorrow they want to schedule PT, they do it seven days a week. So far so good on the chemo and radiation treatments.
We took a few things over to the apartment that people are lending us till we get our household stuff here. He fell going to the car and again at the apartment. While we were putting stuff away, Jim passed out and we couldn't get him to come around so called ER. They took him to hospital and said he was very dehydrated and gave him 2000 ML liquids. By 2am we walked out, Jim had enough and wanted to get home and they were very busy in the ER and didn't release us. Jim got up at 11:00 today and doing fine. He eats very well and we're making him drink a lot of water.
We had a visiting nurse come to see what we need. She's going to setup a social worker for OT, PT and Speech. Jim's right leg is getting real weak so needs help with getting it strengthen. We are also setting up home health care so I have some help with showers mainly.

Keep strong, Dee. Praying for both of you. I remember my Dad got dehydrated a lot when he was going through chemo and radiation. He hated to drink water, so I got Crystal light to put in it and it helped.

Thanks for the update. You are doing an amazing job in a very difficult situation....so much so quickly!!! Apartment looks nice and love that you have a little nature around:o) Best to you both🤗 You are in our thoughts and prayers!!!

Looking good, Jim! So is the new apartment.

One day at a time or 1 minute at a time - just remember to breathe.
Thinking of you daily - prayers to the family.

Thank you for the update! I can only imagine what its like to experience this with a spouse. Karen was real sick for a couple weeks and my mom went through cancer for a period of five years. Please also take time to take care of yourself. It's okay to get sleep, read a book or do things to take your mind away when you can. Take whatever help is offered such as having a trusted friend sit with Jim. When Karen was sick I let myself get run down which made me less effective in helping her. I also think the emotions I was going through were even worse without sleep and relaxation.

We - friends and all - are thinking of you and Jim.

You are an amazing advocate, Dee! But I know it's the toughest thing possible to to traverse. Huge hugs and many prayers for both of you. Love the new apartment and pray your household goods have arrived by now! TJH! Molly & Bob