We got up early to get breakfast and go to a soccer game. They were scheduled for 9:30. We pulled out of the driveway and Rick got a call that it was cancelled. I'm glad we didn't get all the way there and find out there was no game. It was cool and trying to rain, it rained most of the night that's why they cancelled the game the fields were in bad shape. We decided to stay in and just visit.

For lunch we had tacos and Tammy and Kendra came by to talk awhile.  Kendra is Jack's mom. Both gals live very close.

We watched the hurricane Dorian location then later went to a recreation place called Round One to play ping pong.  Jack loves it and Jim and I  played a little too. I actually had good eye and hand coordination to play and so did Jim . (Click on the pictures to enlarge).
Jack, Dee and Jim 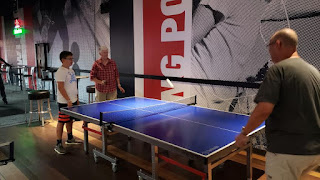 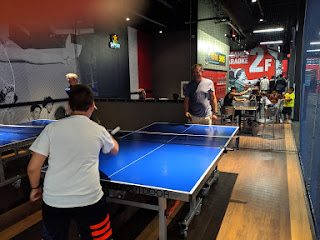 We worked up quite an appetite so we went to a great pizza place called Aurelios. 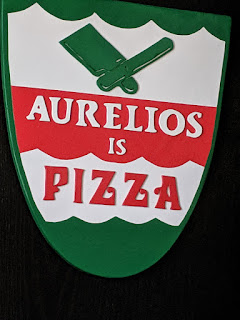 We met Tammy and the kids there. I love the Chicago area pizzas.  I had a tiny ham and pineapple, the huge pizza was pepperoni and sausage. 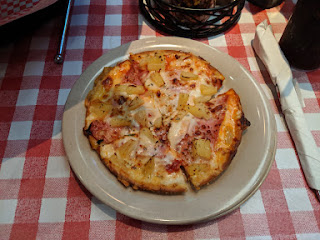 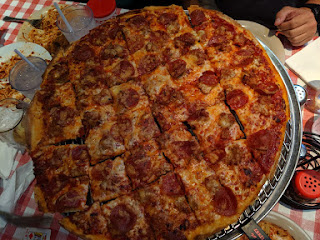 They have a guy that did some great magic tricks and had balloons for the kids. The kids then tormented rick with the balloons. It was hilarious, guess you had to be there. 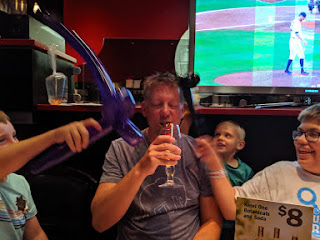 We went to Tammy's for a backyard fire and even set off some fireworks. 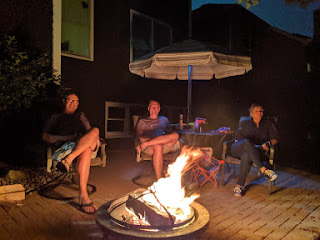 It is a holiday weekend.

We're leaving in the morning for our oldest son. See ya tomorrow night.