(Adamstown, PA) Hi 94 Lo 75 – This is our second visit to this part of Pennsylvania since we started full timing 3 1/2 years ago. We didn’t visit Gettysburg the last time we were here, so we wanted to be sure to take it in before we left this week. We left around 9:30 this morning for the 80-mile drive, stopping on the way at a local diner for some breakfast.

I must admit, I’m not a big Civil War buff (and neither is Dee), so Gettysburg wasn’t high on my bucket list. But the battle of Gettysburg played such a significant role in the war that if I was going to see just one Civil War site, this should be the one. But there was one other big reason I wanted to visit… the Eisenhower farm. Dwight Eisenhower is my favorite U.S. President, and I was thrilled last year to visit the Eisenhower Library and Museum in Abilene, Kansas. So I was really looking forward to visiting the home he and Mamie lived in after his presidential years. 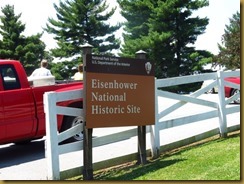 A shuttle bus took us from the Gettysburg Visitors Center to the Eisenhower Farm on the western edge of the Gettysburg battle grounds. There we got a short briefing by a volunteer docent, then we were free to walk around the grounds at our leisure. We weren’t much interested in the farm buildings, so we headed for the home. 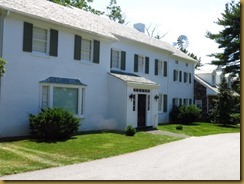 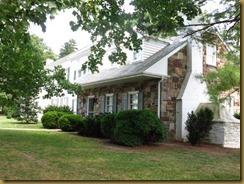 The house is furnished just as it was when he and Mamie lived there. Their favorite room was the sunroom, where Ike hosted many world leaders, including Winston Churchill. The painting on the easel is one of many that Eisenhower painted. He was quite an accomplished painter in his retirement years. 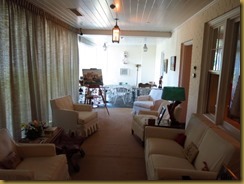 This small room, no bigger than a large closet, was Eisenhower’s office. 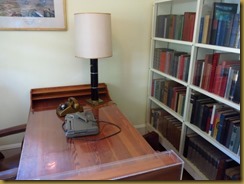 After about an hour we hopped on the shuttle bus back to the Visitors Center. We watched a film about the battle, then went upstairs to see the Gettysburg Cyclorama. The Cyclorama is a large oil painting, and by large I mean LARGE! It’s over 40 feet high and 377 feet long. It was painted in the late 1800’s by French artist Paul Philippoteaux and stretched around a 360-degree circle. When accompanied by selective lighting and thunderous sound effects to give a simulation of the battle. (Remember, this was before video cameras.) It was first shown in Boston in 1844, then went into disrepair over the years before it was restored and moved to the Gettysburg Visitors Center. I took a few photos of sections of the painting. (Click on them to enlarge them.) 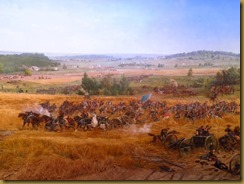 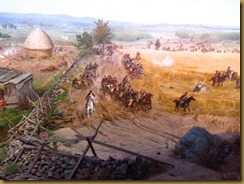 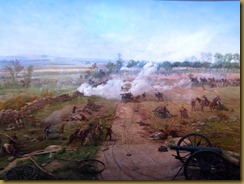 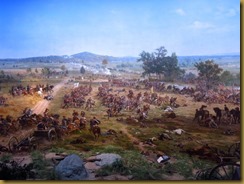 The painting was remarkably real looking. There was a diorama in the foreground that melded seamlessly into the painting, and the “sky” was extended all the way to the ceiling. With the help of modern technology in the form of lighting effects and digital sound, and some narration, it made for a very impressive show. The cannons really roared!

After walking around the museum for awhile, we left to do a little driving around the park. A full driving tour with stops at every point of interest takes about 2 1/2 hours. We didn’t do the whole thing. We did visit the Soldiers National Cemetery, where Lincoln gave the Gettysburg Address. 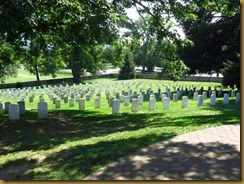 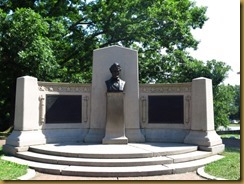 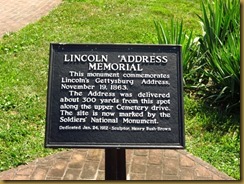 The location of Lincoln’s address was actually at the current site of the Soldiers National Monument. 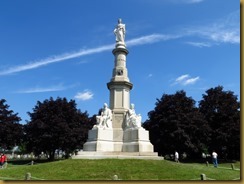 Fanning out from the Monument in concentric circles are grave markers for the fallen soldiers of Gettysburg. Simple, yet very touching. 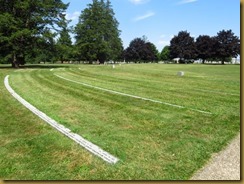 Here’s a close up of one of the rows. Note the many “unknown” markers. 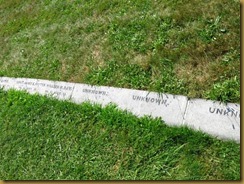 We drove around enough to see a few of the battlefields. The large fields are interspersed with various statues of generals and monuments for all the states that ook part in the war. 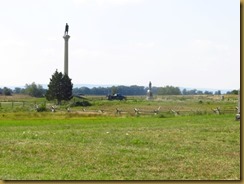 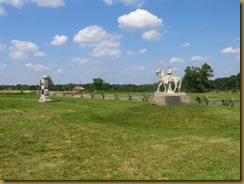 The rail fences that outline most of the fields add realism to the experience. 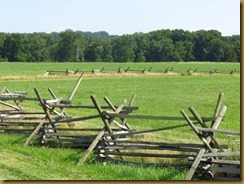 Gettysburg was the deadliest battle ever held on North American soil. It didn’t end the Civil War, but it was a turning point, sort of the last gasp for the Confederates.

On the way home we drove through downtown Gettysburg. It’s an attractive town, but as usual it’s dominated by tacky shops and souvenir stands. I wish I was more interested in the Civil War, I think I would have gotten more out of my visit. But I’m glad we went. I think every American should visit Gettysburg if they have the chance.

We did the entire Gettysburg tour but never got to the Eisenhower farm. Loved Gettysburg and all the Civil War history. We'll have to go back!

When I lived in Northern VA I managed to get to Gettysburg on a number of occasions, even camping overnight a few times. My favorite spot in the park is Little Roundtop. The rangers always give a good description of the battles and officers from both sides who fought there.

I visited there almost 50 years ago. Those painting are beautiful. I like to paint for my own pleasure and I am not very good. But it allows me to appreciate good painting even more. I know the work that goes into them

Gettysburg is an incredible place for sure. Been there many times when we lived in PA. Can take a few days to take it in, along with the surrounding area.