Baseball Game in Philadelphia, and Wings at the Park

(Adamstown, PA) Hi 85 Lo 67 -- No rain! I think it was around 3am when it finally stopped raining. Kathleen came over to visit awhile to talk about quilting and crocheting. Around 1pm Jim left for Philadelphia to go to a Phillies baseball game. Here's his report.

I left for the 65-mile trip to Philadelphia a little over two hours before the 3:15 start time, thinking I'd have plenty of time to get there. Everything was fine until I got off the Pennsylvania Turnpike and onto I-76 for the last 20 miles or so to Philly. All of a sudden it was heavy slow moving traffic. 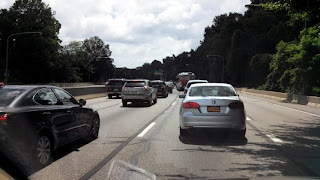 It stayed that way for the whole 20 miles, and I could never figure out why. Maybe that's normal for this area, but it sure did slow me down. I got to the stadium parking lot about 20 minutes before game time, and a little frazzled. Citizens Bank Park is part a complex that also includes Lincoln Financial Field, home of the NFL Eagles, and the Wells Fargo Center, home of the NHL Flyers and NBA 76'ers. 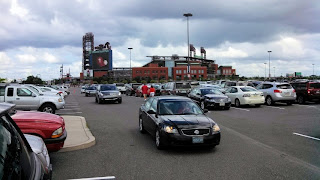 Lincoln Finacial Field on the left and Wells Fargo Center on the right. 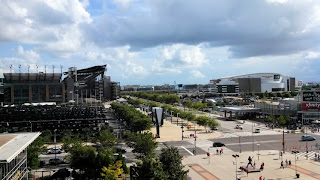 I had planned to buy a $30 ticket in the top section behind home plate, my normal location of choice for a major league game. As I was walking to the stadium I spotted a scalper and asked what he had. He showed me a $53 field level ticket and said he wanted $40 for it. I told him I planned to buy a $30 ticket and that's all I wanted to spend. Then he said he'd take $30. Cool! I was a little nervous as the gate attendant scanned the ticket, but it checked out ok. That was my first experience dealing with a scalper.

I settled into my seat and enjoyed the game between the Phillies and the Chicago White Sox. 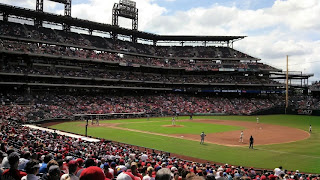 That's another major league ballpark checked off my list. I've been to well over half of them by now. In the eighth inning I wandered around the stadium before leaving to beat the traffic. (I seldom stay for the whole game unless I'm at a Cardinals game. The ballpark experience is more important to me than the actual game.) The outfield plaza offered a nice view of downtown Philadelphia. 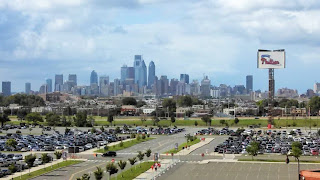 I made my way to the car and headed home. The traffic was a lot smoother leaving the city. I listened to the rest of the game on XM Radio. I was smart to leave early, as there was a rain delay in the middle of the ninth inning. I wasn't surprised because I ran in and out of rain showers all the way home.

All in all it was a nice experience, except for the traffic jam on the way. But I suppose that's to be expected in a big city. I'm looking forward to seeing more of Philadelphia, which we'll get to do in a couple of weeks.

While Jim was gone I loaded a new program I found called Life360 on my smart phone. It lets me see where he is on a map so I know when he'll be home. He loaded it on his phone while at the game and we synced with each other. It's by invitation only and great for letting our family follow along with us on our trips. We also have a few friends that have joined us. Google cancelled Latitude, which we used all the time, but I think this program may be better.

I cleaned the RV and the only thing left is defrost the refrigerator. I may do that this week too. About 5:00 I went to the pavilion for a chicken wing get together with the park residents. Jon was helping with the cooking so I got to spend some time with him.

Jon is the one wearing the blue apron. They had two big fryers going. 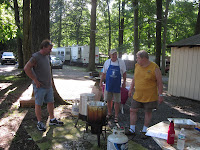 Some of the huge supply of chicken wings, ready for cooking. 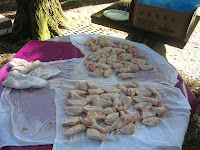 After frying the wings they put them in crock pots with several kinds of sauces. People brought side dishes to share. It was a great meal. I had a plate ready for Jim when he got home. He said he had rain showers on the way home, but it was beautiful here all day.

Glad to hear he got to the game and back again to a plate of yummy chicken wings. Sounds like he had a good day. I only went to one baseball game and that was back in old Forbes Field about 60 or so years ago. Was in box seats right at first base. Could reach out and touch the field.

I was born and raised just north of Philadelphia. Worked in the city for 2 years:o(( I-76 is the Schuylkill Expressway - to locals it is called The SUREKILL Expressway!!! Always a mess!!!

Glad you got to the stadium and back safe and sound:o)

Yup, that is normal traffic. Doesn't matter what is going (or not going) on in Philly, same traffic! Glad Jim had a good time!

Hey it's good to see another full-timer going to baseball games! I'm a little behind you, at the moment, but I plan on hitting several sporting events in Denver-KC-Tulsa this fall...