(Adamstown, PA) Hi 85 Lo 70 -- We took our time getting ready to leave this morning because we had to go only 120 miles. There was no rain, but it was very humid.  The traffic on I-81 was very heavy, with a lot of trucks. At Harrisburg we picked up the (much less crowded) Pennsylvania Turnpike for the last 50 miles or so to Adamsville, PA.

We paralleled a beautiful mountain range on our left. It was a little like last year when we traveled alongside the Rocky Mountain range in Colorado, except here they're more like high hills in comparison. It was really pretty, and of course pictures don't do them justice. 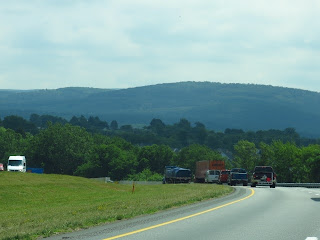 We arrived at Sill's Family Campground in Adamstown at 2:00. Jon and Kathleen, our friends from Adelaide Shores, our winter park in Florida, live here during the summer. They have a beautiful park trailer with a large deck that Jon added this summer. They came over to greet us as we were setting up, then later they took us to a local ice cream stand for an evening treat.

Kathleen and Jon on their new covered deck. 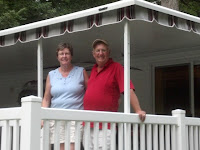 We were warned that we probably wouldn't be able to get a satellite signal here because of the trees. However, the park owner set us up in one of the nicer (and larger) sites, and it happened to have an open sky to the southwest. It was scheduled to be occupied, but the couple who were staying in it had to leave in a hurry today. 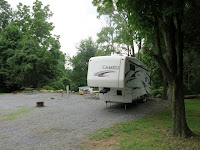 The pool is right out our back window. 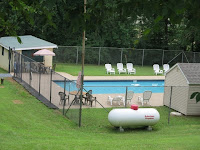 Rental cabins are to our right. 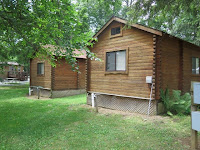 We'll be here for a week. We were in this area three years ago so we've already seen many of the sights. But there's so much to do around here I'm sure we'll find some new things to do.

I see you are actually in Mohnton, PA. That was my first home as a child, but I grew up nearby to that in Shillington. Now I'm about two hours north of there, so you're kinda in my neck of the woods now. Enjoy!

What luck to be able to get a good site with access to the satellite. I've always thought I-81 was terribly crowded with so many trucks, but it still is better than I-95.

Don't miss Shady Maples Smorgasbord about 10 miles south of you. There is also the Shady Maples Supermarket right next door. Both are amazing!!!